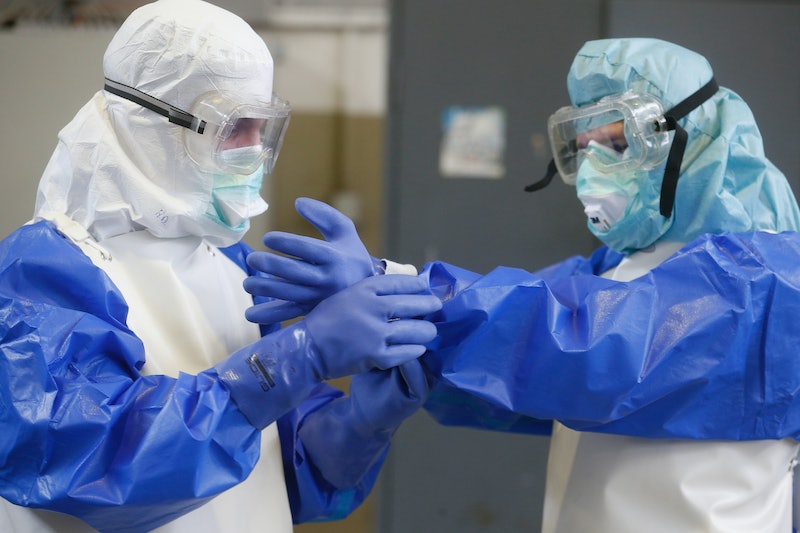 Oh, Halloween. How I miss the days of my childhood when everyone just wanted to be a cat or a witch or maybe a fireman. Now it seems like it's a just a whirlwind of offensive costumes, the latest being this Sexy Ebola Containment Suit getup being sold at brandsonsale.com, first spotted by Salon.com. Like mom always said, "You can be any sexy version of a thing you want, if you just believe."

In case you haven't been reading any sort of news in the past year or so, Ebola is a disease that's spreading pretty rapidly throughout the world, and has a mortality rate ranging from 30 to 70 percent, depending on where you are. So, while I'm a big proponent of the "finding humor in even the most depressing situations makes life a lot more bearable" theory, even I'm not entirely on board with any sort of Ebola jokes this October.

Oh, and if the costume wasn't already gag-worthy enough, the site (which looks like it's going to give my laptop a few viruses of its own, BTW) also takes a misogynistic spin, saying "Ending plague isn’t the endeavor of a single woman, so be sure to check out our men’s Ebola Containment Costume for a great couple’s costume idea.” Ah, yes. All the single ladies, please stand in a corner and weep until the men have chased Ebola off the planet.

Also, can I just say that that's, like, barely sexy? Those yellow boots are heinous. Bad job all around, offensive costume designers.

More like this
8 Charities To Donate To During Black History Month
By Alexis Morillo
These Artists Are Reimagining Black History Month To Create A Better Future
By Katie Mitchell
Phoebe Dynevor Serves ‘Bridgerton’ Underboob In Stunning Floral Gown
By El Hunt
Twitter Is Having A Field Day Over Mr Blobby’s Costume Selling For £62k
By Catharina Cheung
Get Even More From Bustle — Sign Up For The Newsletter
From hair trends to relationship advice, our daily newsletter has everything you need to sound like a person who’s on TikTok, even if you aren’t.