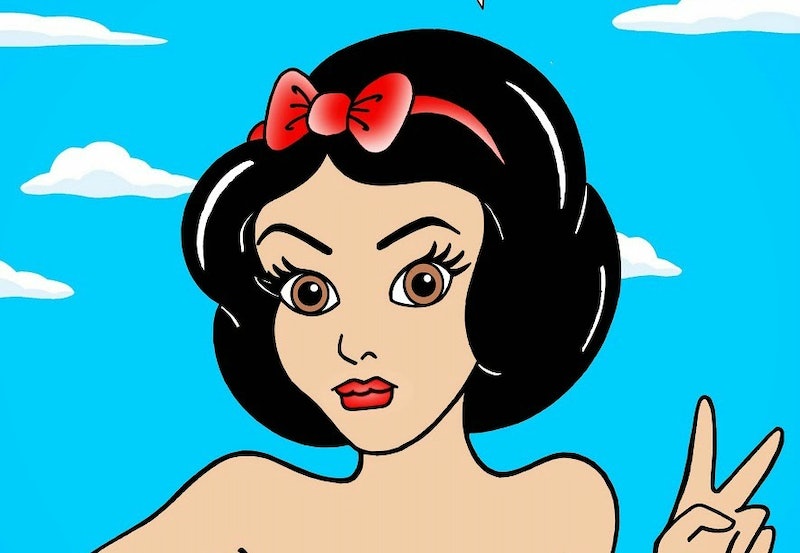 Breast Cancer Awareness Month might be almost over, but that doesn’t mean we should stop caring about it — which is exactly what Italian artist AleXsandro Palombo is getting at in his latest series, “Survivor.” Depicting fictional, animated characters as breast cancer survivors, Palombo ventures into familiar territory with his choice of subjects. Even so, however, the results of the series remain powerful in spite of — and, indeed, even because of — their familiarity.

This isn’t the first time Palombo has employed well-known characters to discuss a hot-button issue; in the past, he’s used them as a springboard to talk about both domestic violence and the Israel-Palestine conflict. Sometimes he even trots them out for lighter pieces as well, as we saw when he Simpsonized first Kim Kardashian and Kanye West, and later Amal and George Clooney. But “Survivor” might be my favorite of his recent riffs, due both to the positivity of the series and the many things we can take away from it.

According to Metro, he describes “Survivor” as “a powerful reflection on [breast cancer], mastectomy and its effects, female identity, and acceptance.” Some of the characters hail from the Disney canon, like Snow White:

Others come from grownup cartoon favorites, like Marge Simpson:

Some, like Wilma Flintstone, take their cues from Hanna-Barbera and other classics:

And even Wonder Woman puts in an appearance, representing the superhero pantheon:

Like the real life women who have posed for the Grace Project and those who are part of the Flat & Fabulous group begun by Barbie Ritzco and Sara Bartosiewicz-Hamilton, these fictional survivors have opted not to have reconstruction after their mastectomies. Part of the reason behind this artistic choice might be because it’s a clearer representation of the issue — but I don’t think that’s the sole reason for the choice. As is the case with most series of this ilk, using cartoon characters accomplishes very specific goals — goals which are almost always about familiarity. In this instance, it normalizes the decision not to reconstruct: Our identities as women are not determined by the state of our breasts. Those who choose not to reconstruct after a mastectomy, those who do, and, really, anyone else who identifies as female are all “real women,” regardless as to the size or even the presence of their breasts.

I’ll admit that I’ve started to wonder why so many contemporary artists these days go immediately to Disney and other cartoon characters in order to make their points. I also worry that one day — and soon — we’ll become so saturated with them that they’re no longer effective. But I don’t think we’ve gotten there yet; furthermore, if they continue to be useful lenses through which to view difficult issues, then more power to them.

Check out the full series over at Palombo’s blog, Humor Chic.