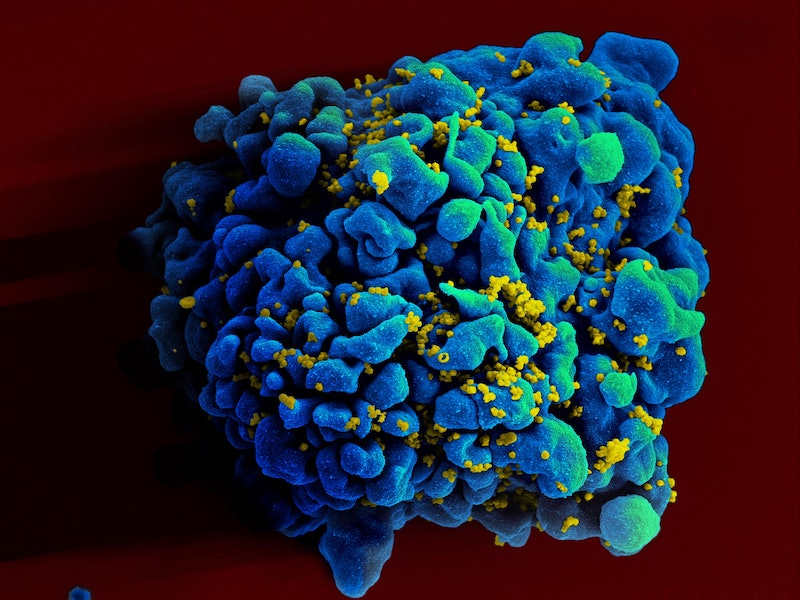 We at Bustle love giving you tips for how to tap into your sexual potential and troubleshoot when things aren’t going your way in the bedroom. But what about finding solutions to those stressful sexual health situations that inevitably crop up when you’re getting down? Emma Kaywin, a Brooklyn-based sexual health writer and activist, is here to calm your nerves and answer your questions. This week’s topic: The pill called Truvada (or the PrEP pill), which protects you against HIV.

Q: I've been seeing a guy who I really like, but I'm freaking out because he just told me he is HIV positive. I want to be with him but I'm terrified — I don't want to get the disease! I know about condoms, but my friend told me about this new pill that I can take to protect myself, does that really exist? Does it work? And where do I get it?

A: Finding out that a romantic interest is HIV positive can be jarring — to say the least. Even if you are aware of all the breakthroughs in HIV treatment and actively work to smash stigma in your own life, being surprise-confronted with the threat of catching a lifelong disease can be a lot, and feeling terrified is a fully legitimate response.

Before I get into answering your question, let’s commend your partner for being brave and telling you about his status. Disclosing to another person — particularly one you want to be your lover — can be just about as terrifying as finding out you yourself are positive.

And now for the good news: the rumors are true! There is a pill you can take to protect yourself from HIV. It’s called Post-exposure Prophylaxis, or PrEP, and I’m so excited to tell you all about it. Here's what you need to know.

What is Pre-Exposure Prophylaxis?

Let’s start off by defining the terms. “Pre" means before, “exposure” is when you come into contact with HIV, and “prophylaxis” is an action or treatment you can take to prevent disease. Putting it all together, we’re talking about something you take before you’re exposed to HIV to prevent it from infecting you. If you’ve ever had to take malaria pills before you travel, you’re familiar with the concept of prophylaxis (and probably hallucinations, but that’s irrelevant to the current conversation). The bottom line is that PrEP is a pill you take daily that does a very good job of protecting you from becoming infected with HIV.

You may already know that since 1987, antiretroviral therapy has been available to help people who are HIV positive stay healthy. The PrEP pill (brand name Truvada) contains two of the drugs in the antiretroviral cocktail that HIV positive people may take (tenofovir and emtricitabine). It was approved by the FDA in 2012 and has been in increasing use by cool kids in the know since then to prevent infection.

How Well Does It Work?

As our former U.S. Surgeon General C. Everett Koop famously put it: “Drugs don’t work in patients who don’t take them." Which is to say ... thanks Captain Obvious! But really, most people don’t take their medication as directed, and this lovely reality of human nature is no different for PrEP.

Researchers are still figuring out the precise real-world efficacy rate, but the overarching finding is that PrEP is at least 90 percent effective if you follow the medication instructions. However, the most important thing to know about being on PrEP is that you have to take it EVERY DAY for it to work. All studies assessing the efficacy of PrEP have found — not so shockingly — that if you don’t take the pill as directed it doesn’t protect you.

That said, trials that have looked at the amount of the drug in participants’ blood found that for people who are actually taking PrEP, the drug can be up to 99 percent effective. While that’s not perfect, it’s pretty damn good. (By the way, if you miss a dose, don’t double up the next day. Just take your single regular dose as soon as you remember, like you would with oral birth control.)

What About Side Effects?

You may be wondering: taking this pill every day, how is that going to make my body feel? The good news is that PrEP is very well-tolerated by those who take it, which means it doesn’t make most people feel sick or otherwise less than their usual fabulous selves. The main side effects that have been reported are nausea, headaches, and minimal weight loss. Most of these not-so-great feelings go away after a month though, so if you experience any of these, you may wanna power on through.

Researchers have also found slight bone density loss in folks taking PrEP, but this hasn’t been associated with any increases in fractures, and is certainly not nearly as much bone density loss as you could expect to experience if you are HIV positive and on the full treatment.

Another side effect often worried about with PrEP is resistance: if you are on PrEP but happen to become HIV positive, will you become resistant to HIV treatment? While there have been a few instances of resistance resulting from this scenario, researchers have found that this is very rare and only has been found to occur in patients who started PrEP while they were already HIV positive but didn't know it (this is called undiagnosed acute HIV infection).

A Word About Care

Something really important to know about PrEP is that your doctor doesn’t just give you a prescription and then send you on your merry way. Integral to the PrEP clinical practice guidelines is an ongoing relationship with your healthcare provider. Seriously, become besties with your doc, because you’re going to have to hang out every three months while she or he makes sure you haven’t become HIV positive from sex with your partner (or partners).

While this is very rare if you’ve been following the pill-a-day-keeps-the-virus-away regimen, it can happen. And if it does happen, it’s critical that you transition straight away to the full HIV treatment, since the drugs in PrEP aren’t enough to keep you healthy on their own.

You need to get a prescription for PrEP, so talk to your doctor — and if your doctor doesn’t know about PrEP or makes you feel in any way uncomfortable about wanting to take it, look online in your area to find a clinic or doctor who is a PrEP advocate.

While this may seem like a lot of time in a scratchy paper gown, seeing your doctor on a regular basis has its benefits! To wit: you can get routine sexually transmitted disease (STD) testing, which is always a good idea. And on that note, a public service announcement:

To Condom or Not to Condom?

It bears saying explicitly: PrEP protects you from becoming infected with HIV, but it doesn't do a damned thing against other STDs. Barrier protection is the only way to protect yourself from the full line-up of germs you can catch through knowing someone in the Biblical sense (besides abstinence of course, but that's less protection and more avoidance). Many PrEP users continue to use condoms for this very reason, and to provide extra extra protection against HIV.

Can I Afford It?

A pill every day — that’s 365 pills a year! Medication can be expensive, particularly when there are no generic options on the market, and that’s not even mentioning the doctor’s visits and labs that are an integral part of PrEP care. If you have no health insurance, PrEP can cost up to $13,000 each year.

But don’t panic! Medicaid and Medicare cover PrEP in many states, as do most/major private insurances. In addition, Gilead (the company that makes Truvada) has a number of patient assistance programs that can help you or even pay for all of your pills depending upon your qualifications. Or, you can enroll in a clinical trial (which means you’ll be furthering science for the whole world in addition to getting your pills and care bankrolled!).

And if you live in Seattle, you’re especially in luck — you can qualify for free assistance (something San Francisco is also working on). If you have private insurance, PrEP will cost as much as your co-pays for other brand name drugs. Call up your health insurance company, start grooving on that hold Muzak, and eventually, they will help you figure out how much it will cost you under your current plan.

So What Does This Mean For My Relationship?

Now that we know the basics about what PrEP is, let’s talk about what it can mean for you!

Being A Sero-Different or 'Magnetic' Couple

If you are HIV negative and your partner is HIV positive, you are in what we like to call a sero-different/discordant or magnetic relationship. If you decide to partner in this way, you’re in great company. Many others have chosen and continue to choose to spend their romantic time with someone of opposite HIV status. You can read some of their stories here in this moving issue put together by POZ Magazine.

Yes, being a magnetic couple has its complications, but honestly, what relationship doesn’t? And the best news is, if your partner is taking his or her HIV meds and has an undetectable viral load (where the virus is so well-managed by the powerful HIV drugs that standard tests can’t pick up enough copies in the blood to detect it), a groundbreaking recent study has shown that the likelihood of you becoming positive is virtually zero. Couple that with PrEP and you’ve got yourself a very safe couple!

Equally groundbreaking is what PrEP is doing for magnetic couples who want to make tiny humans. Giving PrEP to HIV negative mothers-to-be has been shown to result in an HIV negative mother and baby, as depicted in this amazing success story. Research has found that taking PrEP during conception and pregnancy doesn't result in any more challenges getting pregnant, staying pregnant (translation: miscarriage), and further doesn't mess with infant growth once the wee one is on its own. If you are an HIV negative lady who is interested in becoming pregnant with an HIV positive partner, there are plenty of great resources available to connect you to providers in the know.

For those of us who have grown up with the omnipresent threat of HIV since birth or early adolescence, PrEP is another way to alleviate stress you may be feeling associated with sexual activity. PrEP users report feeling sexually and anxiety free, some for the first time in their lives.

For women who sleep with men, it can further feel immensely empowering to be given the opportunity to take a more active role in the protection of our bodies. Whereas with most condoms ("female" or internal condoms aside), the onus is on the partner with the cock to let us know when something goes wrong, PrEP gives the power to negative partners to protect themselves regardless of gender presentation.

Equally exciting, a bunch of other methods of prophylactic protection are in the works, including rings, gels, and long-acting shots. While these are still in the testing phases, chances are they will be FDA-approved in the next few years.

But remember: PrEP is not a magic bullet. As with all other forms of protection, it doesn’t work 100 percent of the time. The best way to protect yourself is to use all the tools in your prevention toolbox (you know, the one under your bed, right next to your toybox), and to couple them with open and honest communication with your partner or partners.