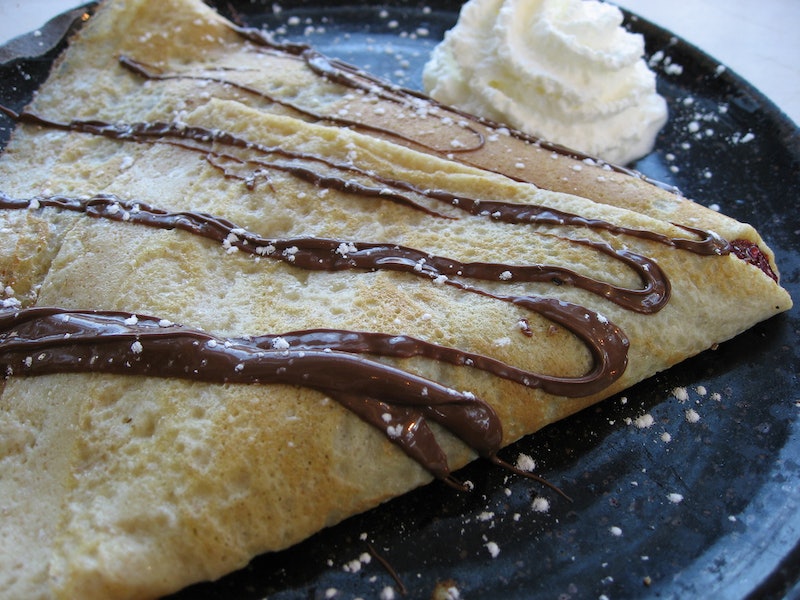 Bakery chain Sprinkles made waves when it unveiled its 24/7 cupcake ATMs earlier this year — but who needs a cupcake ATM when you could have a crepe vending machine instead? Seriously, you guys — forget the cupcakes. Crepes are way better, and in this case, they’re cheaper, too… as long as you already happen to be in Japan, where these babies are located.

OK, so a trip to Japan might be prohibitively expensive for a lot of us, but still. A vending machine that dispenses crepes. That’s a magical enough thought in and of itself, and the fact that it actually exists? Hoo boy. It’s almost too much awesome for my brain to comprehend. According to Kotaku, this particular one was spotted recently in Kagoshima Prefecture by the blog Kansaitei Kyushu. It’s refrigerated, and it offers crepes filled with everything from fruit and cream to caramel pudding. The tasty treats go for 200 yen each, or just under $2 — and they’re even dispensed nicely. The crepes pop out from the machine housed in a little glass bottle, which keeps it fresh and prevents it from being squashed, while a bin nearby waits for the return of the glass bottle after you’re done enjoying your snack. The machine looks like this:

Kind of Twinkie-like, perhaps, but who cares, because crepes.

I don’t think I have to stress how much I wish I had a crepe vending for my very own. If I had the space, I would literally devote an entire room to it. It would become a shrine to my love of crepes, forever providing the world with delicious, fruit and chocolate-stuffed pastries. All hail the mighty crepe machine, for it is a thing of great beauty.

If, however, you think a crepe vending machine is weird, rather than awesome, that’s OK. I won’t judge. I will, however, present forth a number of other Japanese vending machines that are even wackier than one that spits out crepes. Are you ready for this? Because it’s going to be a bumpy ride.

As Kotaku pointed out back in 2012, Westerners are oddly fascinated with Japanese panty vending machines — but there are also ones that dispense boxers and undershirts. A-plus on equal opportunity underwear provision, vending deities.

I would imagine the draw of getting canned bread is kind of like whatever the hell inspired us to buy dehydrated astronaut ice cream from the science museum as kids.

You can also get sake out of vending machines in Japan. Two thumbs up from me!

Nothing says “I love you” like vending machine flowers.

This photo is from 2001, so I’m willing to bet that ringtone vending machines aren’t super popular these days. But still — I love that they once existed.

Now, this? This is useful. Can we get some of these, please?