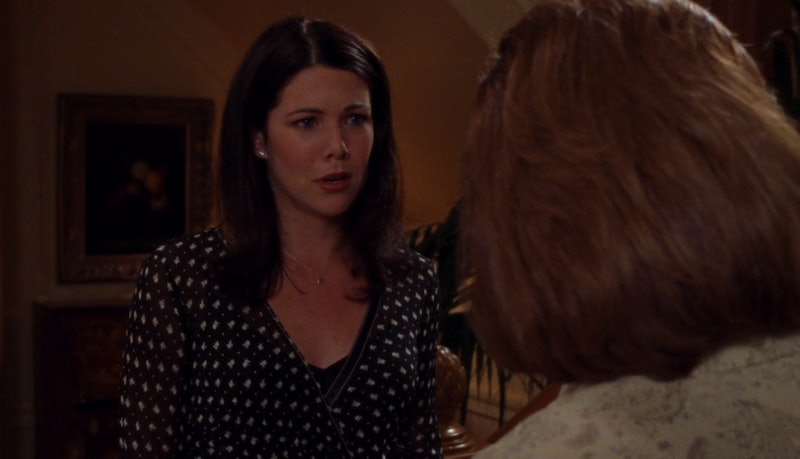 As one of the great shows of the golden era of The WB, Gilmore Girls has a lasting legacy that includes something its other WB siblings also got stuck with: The perennial debate over who should have ended up with who. For other examples of this, see Dawson's Creek, or even Buffy the Vampire Slayer depending who you ask. With Gilmore Girls, though, the conversation is forever a messy one: Rory Gilmore, for all her angel beauty and booksmarts, made some pretty controversial choices in the dating department. Her boyfriends, then, are a small batch of young men who a lot of people have very differing, very strong opinions about.

These opinions are fun to discuss, and to dissect, and to get into very loud arguments about. I have taken part in many myself, and I doubt I'll ever stop. But when I actually go back to watch Gilmore Girls, it strikes me that the romantic relationships are very far from being the best or most interesting ones on the show. True to form, Gilmore Girls is at its best when it's showing us the complexities of familial and platonic relationships. Those ones, at least how Gilmore did it, were far more dynamic than any will-they-won't they. Here are a few of my favorites.

There is a lot of debate over the place of Jess in the pantheon of Rory Gilmore's love interests. While I have more than my fair share of opinions on that matter, though, there is another, oft-neglected Jess relationship that is even more crucial to his character. That's the one he has with his uncle Luke, who takes him in and in the moment seems to fail to grow him up.

But it's clear from the ways Jess' character progresses that Luke didn't fail in his mission, and that it's their relationship that had far more of a lasting impact on Jess as a person than Rory did. Rory may be the love interest, but Luke's the one who makes sure Jess learns to actually love another person. Luke's the one who instills in Jess the will to become more than what the world expects him to be. If you want proof, take a look at "Last Week Fights, This Week Tights," the episode where Jess' mom gets married, when Jess says goodbye before heading out of town.

Jess: I wanna pay you back, all the money...

Luke: You don't have to.

Jess: I want to. And I appreciate it. Everything. The money, living here.

Luke: It's good to hear, but I kind of knew that.

Jess: Yeah, but in a relationship — any relationship — it's important to let the other person know you appreciate them, so you don't create barriers that delay any hope for reciprocation.

Luke: I think I read that somewhere. You're hoping for reciprocation? You got it. I'm here, Jess, I'm always here.

And then I cry way more than I did when Jess left Rory.

Rory may have been reluctant to let Paris take on the role of one of her best friends, but it happened. Sheer force of will and the two of them literally battling through their problems with each other, and out of it came a friendship guaranteed to last the rest of their lives.

Part of the Great Sting of two of the show's sixth and seventh seasons' major decisions — secret daughter April and Lorelai's marriage to Christopher — was the ways in which it pushed aside the beautiful history they'd built between Rory and Luke. Luke didn't need a booksmart teenage girl to show up to be his daughter, because he'd already had one all along. She was a proxy daughter, sure, but that doesn't change the fact that he was at her graduation when Christopher wasn't, or that he'd do things like set up balloons and bake her a coffee cake for her 16th birthday. Every single one of Christopher's insecurities in Season 7 were completely founded, because it's true: Luke was there and Chris wasn't, and not just for Lorelai.

This is by far the most complex, evolving relationship on the show. Rory and Lorelai may go through a huge blow-out or two over the course of the seven years, but they're relatively constant in their devotion to each other. Lorelai and her own mother, however, are a different story: They're alternately withholding from each other in ways that does lasting, palpable damage.

No one on this show can hurt Lorelai like Emily can, and vice versa. But that's what makes their interactions so dynamic: When they do reach out to each other it feels like a triumph that's deeply personal for both of them. They'll never reach the Rory/Lorelai level, and they'll never not have their huge blowouts: They're too good at breaking each other's trust and hopes for one another. But they truly do grow closer over the years, and they're stuck together in a permanent way that makes it far more interesting to watch than an optional romance.