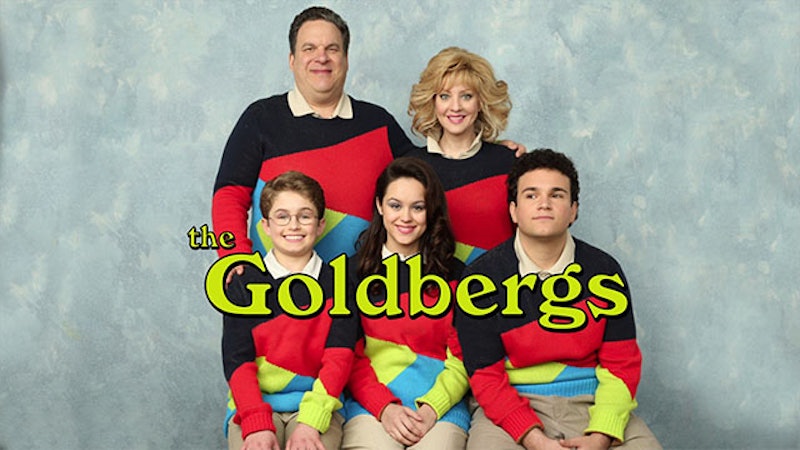 The show espouses the same kind of golden-age thinking these decades-old sitcoms (and most likely, its target audience) do, and spends the opening moments of the show reminiscing on how in the '80s "the world was so small — no cell phones, or Internet, or Twitter." Ah yes, the advent of crack cocaine and AIDs! Those were the good ol' days. Aside from its single-camera, laugh track-free format, The Goldbergs could have been made 10 or 20 years ago.

But surprisingly, The Goldbergs hits many of its comedic moments right on the mark. That could be due to the talent of stars like Wendi Mclendon-Covey and newcomer Troy Gentile, who has some pretty good physical humor as middle child Barry. Plus, the show uses bleeped-out curse words, which will inexplicably always strike me as inherently hilarious. Are the jokes predictable? Hell yes. When new driver Barry finally gets to drive the family car, you know the instant he opens the door that he's going to wreck it. But that doesn't make the needle-scratch moment of the car crashing into the garage door during REO Speedwagon's "Can't Fight This Feeling" any less hilarious.

The Goldbergs may have some surprisingly funny moments, but the show's real strength relies in its emotional warmth. Instead of the grandpa trying to impart some old-guy wisdom on the daughter who tries to take his license away, he explains why it's important for his relationship with his grandson. And instead of calling his wife crazy for sniffing her kids' baby blankets, patriarch Murray joins in. The show doesn't go preachy or corny with its emotional moments, so it feels like they're coming from a real place — which, in fact, they are.

The best part of the show comes in the very last minute, when each character is compared next to old video footage of their real-life counterpart (except for teenage daughter Erica, who is the only new character as well as the least-developed). The resemblances are uncanny. Show creator Adam F. Goldberg based The Goldbergs on his real-life family, and while that doesn't lend much to the show's creativity, it does give the show some heart that comes from a real place.

But if you're looking a show with lots of heart, low aspirations, and a few laughs every now and then, you could do a lot worse than tuning into The Goldbergs.