Hipsters had to start somewhere. That start occurred sometime during the 1940s, when legendary beat poets Allen Ginsberg, Jack Kerouac, and William Burroughs were drawn together by ... murder. Yes, murder. It all sounds very intriguing, made even more so by the fact that that little slice of history is now a movie starring Daniel Radcliffe, Dane DeHaan, and Michael C. Hall. The film, called Kill Your Darlings, has a trailer out now, and it's rolling around in reminiscence of the literary revolution Ginsberg, Kerouac, and Burroughs found themselves at the center of.

Radcliffe stars as Ginsberg, his hair curly, smile indulgent, and his Harry Potter days far behind him. DeHaan co-stars as Lucien Carr, at the center of this story because of his status in the beat movement as well as his role in the center of the murder drama: The film tells the story of David Kammerer's (Michael C. Hall) murder by Carr, both before and after the event itself. The film premiered at the Toronto International Film Festival to rave reviews. The Guardian's Damon Wise called it "the real deal, a genuine attempt to source the beginning of America's first true literary counterculture of the 20th century."

We've got to admit, the trailer's got us pretty psyched; it crackles with an amped-up Dead Poets Society-type energy, and promises solid performances from all around. Elisabeth Olson, Kyra Sedwick, Jennifer Jason Leigh, Jack Huston, and Ben Foster all star as well. These kids dumped the body before it was "cool." 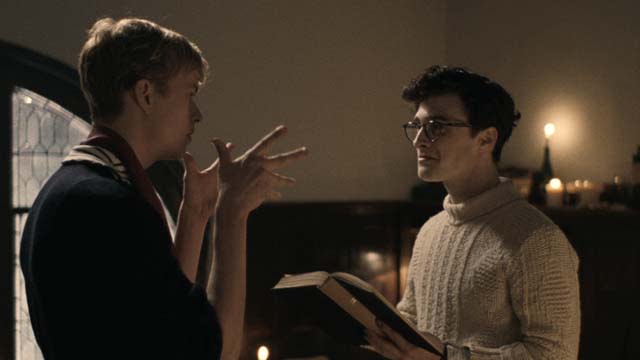