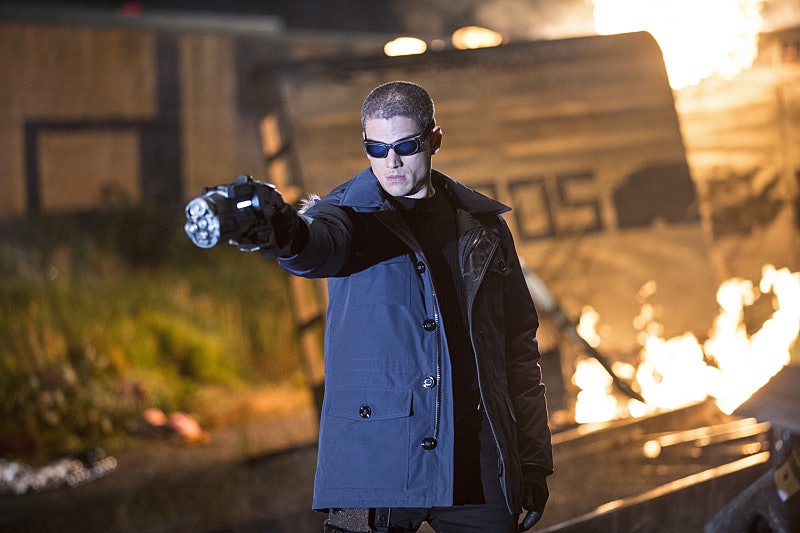 Just a few weeks into its run, and The Flash is already a surprisingly successful show. Even with the occasionally cheesy dialogue, The CW's new superhero drama brims with such joy it is hard not to love. But one aspect the show is mishandling is its villains. The metahumans that have made up Barry Allen's rogues gallery have been terribly boring, no matter what nicknames Cisco decides to give them. Their powers don't come across that interesting and most of them have been introduced and died within a single episode up to this point. So,when I found out that Prison Break star Wentworth Miller was cast as Captain Cold, aka Leonard Snart, I was pretty psyched. Captain Cold is one of The Flash's most well known villains. First appearing in the late 1950s, he started out as a thief. His antagonistic relationship with The Flash began simply because The Flash thwarted one of Snart's crime jobs. But his criminality soon became explained as born of circumstance and need, not mere empty villainy. His sister, Lisa, also figures heavily into his narrative as a way to justify his descent into crime. Originally, Captain Cold had no innate superhuman abilities, but he was intelligent and a proficient marksman. His crimes were enabled by cold-themed weapons he modified, mostly his freeze gun that works at Absolute Zero. For the scientifically minded Flash audience members, you'll have to suspend your disbelief at even higher levels as the show goes on.

Captain Cold went through a pretty dramatic change in 2011, when DC Comics introduced the New 52. No longer a criminal relying on cold-related weapons, Snart was revamped into gaining the abilities from his weaponry, along with other members of the crime group he leads called The Rogues. Now he can create ice gauntlets around his fists amongst other things. Apparently, the recent Forever Evil storyline strips him of his powers so he's back to using his freeze gun. Ah, comics! But based on promos for The Flash episode Captain Cold appears in, it seems the writers behind the series chose to stick to his pre-New 52 origins. This is probably a smarter way to go, since it creates a more varied rogues gallery for Barry. But don't be surprised when Snart becomes a metahuman himself. Maybe we can start a bet. Within three episodes, tops, Snart is going to start aligning with his character's reworked abilities. Maybe I'm being a bit cynical, but I truly hope the show takes it's time with that.

What makes Captain Cold fascinating as a supervillain is his strict moral code and cunning nature, not mere metahuman abilities. I imagine the writers will make his characterization more complicated than the Metahumans-of-the-Week we have been privy to thus far. Eventually, his sister and his belief that crime is a matter of survival must begin to factor heavily into The Flash's version of Captain Cold. They'll have the time do so, since Miller is reportedly slated to have a recurring guest role. Miller seems to have a good handle on the character, telling Entertainment Weekly, “Snart’s a master criminal at the top of his game, and I think he’s been there awhile and he’s a little bored, a little complacent

. Then he meets The Flash, who upends everything."

If you'd like to go a little deeper into the world of The Flash and his villains, I recommend checking out the Justice League Unlimited cartoons. Captain Cold appears in the episode, "Flash and Substance." You can also check out Geoff Johns' run as a writer for The Flash comics which lasted from 2000-2005. Johns is also an executive producer on the CW series, so reading his work can give you an idea of how the material will be approached for television. The way Johns describes his outlook on Captain Cold gives me some hope that the show will craft villains that aren't so disposable. In a blog for DC he says, "[Captain Cold] doesn’t want to rule the world. He doesn’t necessarily want to kill the Flash because, at the end of the day, the Flash is celebrated by everybody, and killing him would bring a lot of heat...He just wants to pull his jobs and continue doing what he’s doing, and in order to work in a city that’s protected by a super hero, he has to become something more than he is."

The Flash is a series still finding its footing, which is understandable for such a new show. But it has a vibrant buoyancy that I have always associated with its leading character. Creating a compelling villain in Wentworth Miller's depiction of Captain Cold will a go a long way for the show in making its mark and not just being the kind of new series you forget five minutes after it airs.