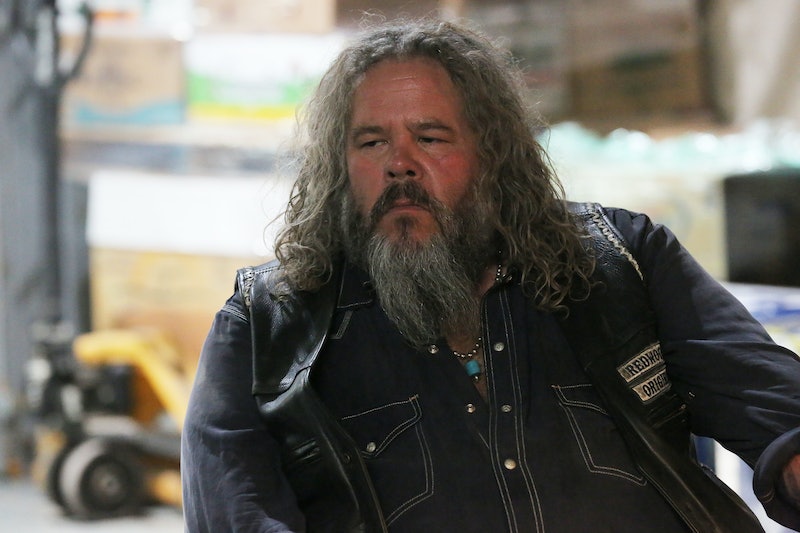 We knew Sons of Anarchy's final season was going to be a wild and crazy ride, but I don't think anything prepared us for the bloodshed "Greensleeves" delivered as we saw a SoA favorite get captured and tortured by August Marks in a very eye-popping type of situation. (Too soon?) And while some may have immediately jumped to the conclusion that Bobby Munson was dead shortly after having his eyeball signed, sealed, and delivered to SAMCRO, Tuesday night's episode promo for "The Separation of Crows" proves Bobby is still very much alive… at least for now. (In other words, Elvis hasn't completely left the building after all.) But given the trajectory of this season, that's no guarantee that he's completely in the clear. The Grim Reaper may find its way to Mr. Munson eventually. He just may have to lose a few more body parts in the process.

Even if we took the show's history of murder and mayhem out of the equation and just focused on the here and now, things still wouldn't look very good for Bobby or the club's prospects. The title alone indicates that SAMCRO is falling apart at the seams, whether it be due to the loss of another member or Jax's further descent into darkness. After all, it's doubtful "The Separation of Crows" is literally describing a group of actual crows (though, I guess to be safe, Gemma's birds should watch their backs as well). No, I'm thinking we should take this on a much more symbolic level and assume that it relates to the state of SAMCRO itself.

Ever since Gemma lied about who killed Tara, the club has severed almost all of its ties with everyone they used to call friends, so it's only logical that it would eventually backfire on them. Because removing Bobby from the inner circle — whether it be due to death or an extended length of kidnapping — is a major hit to SoA at its core. As of now, it's unclear what exactly Marks' motivation is for keeping him alive. As leverage, perhaps? Maybe he even hopes to turn Bobby against the club and rat them all out. And if that's the case, Bobby's as good as dead because if there's one person who cherishes SAMCRO above everything else it's Bobby Munson. He'll never turn again his brothers, regardless of the repercussions.

But even if Bobby doesn't give Marks what he wants and gets killed in the process, it's still not a good sign for Jax & Co. For one thing, Bobby was the club's moral compass and without him around to keep the anger and vengeance in check, there's no telling what road to destruction Jax will take them down. Then there's the fact that Marks won't stop just with one death. Bobby's silence may buy them some time to regroup, but I have a feeling Marks doesn't take double crossing very lightly. He'll keep coming after each and every member until either he's stopped or there's no one left. Both scenarios seem equally possible at this point in time.

However, given that Kurt Sutter has revealed that only two club members will die in Season 7, I highly doubt it will come to that, unless he's completely had a change of heart concerning the show's endgame. So maybe, just maybe, Bobby will be saved thanks to some miracle plan that Jax concocts. But either way, you mark my words — SAMCRO will be forced to separate from something or someone, which could be the beginning of the end for the SoA and those who fought to hold it all together. Get ready…