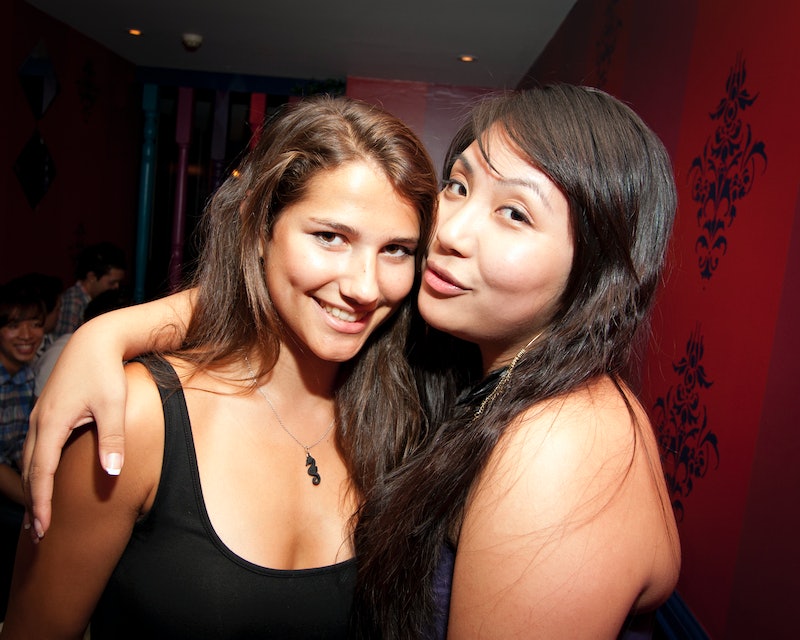 If you’d been around in the 17th century, you would have used the now-defunct term “she-friend” when referring either to a man’s mistress or to a woman who is a close friend. Fast-forward a couple centuries, and the word “girl-friend” serves that same dual purpose. Somewhere in the 1900s, the dash got dropped — and nowadays, “girlfriend” evokes either a female romantic partner or a female platonic friend. The name has evolved ever-so-slightly throughout the decades, dragging the same two unaltered connotations along for the etymological ride.

When I was younger, women of my mother and grandmother’s generations referred to their own platonic "girlfriends," and inquired after mine. To me, the word "girlfriend" felt like a stuffy, dated way to label my companions for mall trips and sleepovers. Most all of my friends growing up were girls, but I called them, simply, my friends. School friends, camp friends, neighborhood friends, ex-friends, best friends — but not girlfriends. Friends who are girls, yes; girlfriends, not so much.

I can express love and appreciation for my female friends in a million ways, but I can't refer to them as my girlfriends — because as a monogamous lesbian, that would probably give people the wrong idea.

Entering my twenties, I’ve noticed a renaissance of the (Platonic) Girlfriend. It’s a term bandied about regularly in my social circles. The women in my life are grabbing drinks with their girlfriends; complaining over g-chat to their girlfriends; planning bachelorette parties for their oldest, greatest girlfriends. Since when did we get old enough to start talking like our mothers?

Something else happened upon entering my twenties: I came out. And I started having— for the first time in my life — actual girlfriends. And in case we’re not clear on what I mean here, I do different sorts of things with my girlfriends than straight women do with theirs. Like, majorly different. Night and day. (Straight and gay?)

I feel the need to clarify, because the word’s two disparate definitions often warrant it. As a woman on the femmer side of gender presentation, rampant heteronormativity has those who don’t know me figuring I’m straight until I actively prove them otherwise.

To upend a lot of straight people’s assumptions, queer people do not have singular Coming Out stories — for many of us, coming out is a never-ending, at times exhaustive process. Queer femme women, especially, have a hard time asserting their queerness in a heteropatriarchal society, which signifies things like short dresses and high heels as iconography of male visual pleasure. (I could say my short dresses are for my girlfriend, but on the real: they’re for me.)

Since I have to come out in some form more days than not, casually mentioning my girlfriend is often a good go-to. It’s less aggressive than dropping a radical piece of queer theory or a brief tale of some casual everyday homophobia on some unassuming straight person to whom I’ve just been introduced. The mention of having a girlfriend can oftentimes occur organically in conversation, so I can force the topic without coming on too strong. While I don’t necessarily need everyone everywhere at every moment to know I’m gay, being presumed straight makes me feels sort of strange and uncomfortable, because that’s so far away from who I am and how I live.

But sometimes, when I pull out this quick and relatively painless coming-out move, it doesn’t appropriately stick the first, or second, or even third time around, because some (straight) women of my generation have started — continued? — to call their (straight) female friends their girlfriends. Because I’m more femme, I can easily come across as one of these straight women to people who don’t know me well, when what I’m really trying to say is, “Yeah, hi, so I’m a lesbian” without being pushy and weird about it.

Note that when written, girlfriend is always girlfriend — one word. What do we call platonic dude friends when we feel the need to call attention to their gender? Not boyfriends. Boyfriends are certainly not platonic friends. So we go, instead, with "guy friend," a phrase which comfortably differentiates the platonic friend in question from a love interest.

What we have here is bad a case of the double standards. “Boyfriend” and “guy friend” exist as distinct terms so that we may more accurately categorize the men with whom women relate. But “girlfriend” stands alone, because — as was the case in centuries past — it is assumed that a man’s girlfriend is his romantic partner, and a woman’s girlfriend is her gal pal (with whom she definitely does not have sexual relations).

I’m requesting we all think more carefully about gendering our friends when we talk about them. If need be, listeners can pick up evidences of gender using context clues. You’re going shopping with Stacey for New Year’s Eve dresses? No need to specify her gender; I’m pretty sure I’ve got it. But even that methodology is flawed and reductive. Diversity of interest spans the whole magical, messy swath of gender identification. So why feel pressed to specify at all?

I get that straight women’s desire to use the word “girlfriend” can stem from valuing female camaraderie, and this I find sweet and important. This, I understand. My friendships with female friends, whether they’re queer or straight, are some of the most important relationships in my life; I’m sure time will prove them to be some of the longest and most fulfilling.

I can express love and appreciation for my female friends in a million ways, but I can't refer to them as my girlfriends — because I, as a monogamous lesbian, would probably give people the wrong idea.

Challenging a culture that makes assumptions about sexuality and gender will take far more than changing the way we speak (and that job shouldn’t fall squarely on the shoulders of women to begin with). But it’s worth it, I think, to question how we casually categorize the people we care about. The people we love.