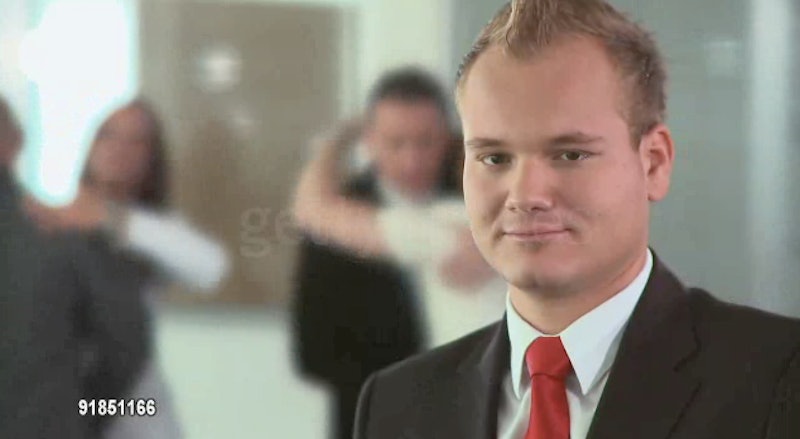 This morning, waking up with a case of the Mondays on Tuesday, this gift of a rap music video set entirely to stock images of business people has totally been the cure for all that is ailing me. I maybe slow-clapped in my apartment. Seriously. I stood up, clapping and solemnly nodding. I felt just like Craig T. Nelson. It was beautiful.

This video, tho. Just when I thought I couldn't possibly love the internet anymore than I do, it provides me with brilliance of this magnitude and my heart swells three whole sizes (Grinch-style.) YouTube user (dare I say, savant?) Peter Greenless took DJ Rashad's track "She A Go" and set it against a backdrop of mundane office stock footage so adeptly that it's kind of hard to believe that this wasn't the official video for the song.

I gotta say, if my office life had been even half as trippy as this clip, I might still be pulling on my mostly-flammable cheap corporate casual wear and trotting happily over to the office in my sensible shoes to stare down the gaping maw of death daily as I answered phones. Luckily for all parties involved (except for "death's gaping maw" which, fortunately, I don't think is sentient), this was not the case.

Since I'm in the internet writing trade, I spend a lot of my time sifting through stock images, trying to find ones that suit my needs. This is harder than it sounds. For the most part, the images and videos are just as insane as this video makes them seem. Like, why are the office workers stepping forward to have their foreheads listened to via stethoscope?! Is it because of Ebola?! HELP ME TO UNDERSTAND. Great, now I'm freaking out about Ebola. AGAIN.

The second time I watched the video, I started wondering what those poor actors are like in real life. Did they have fun on set that day? Are any of them still in touch? Will one them be the next Marlon Brandon? While I am almost certain that the answer to all of these is "no", it is still fun to dream, yes?