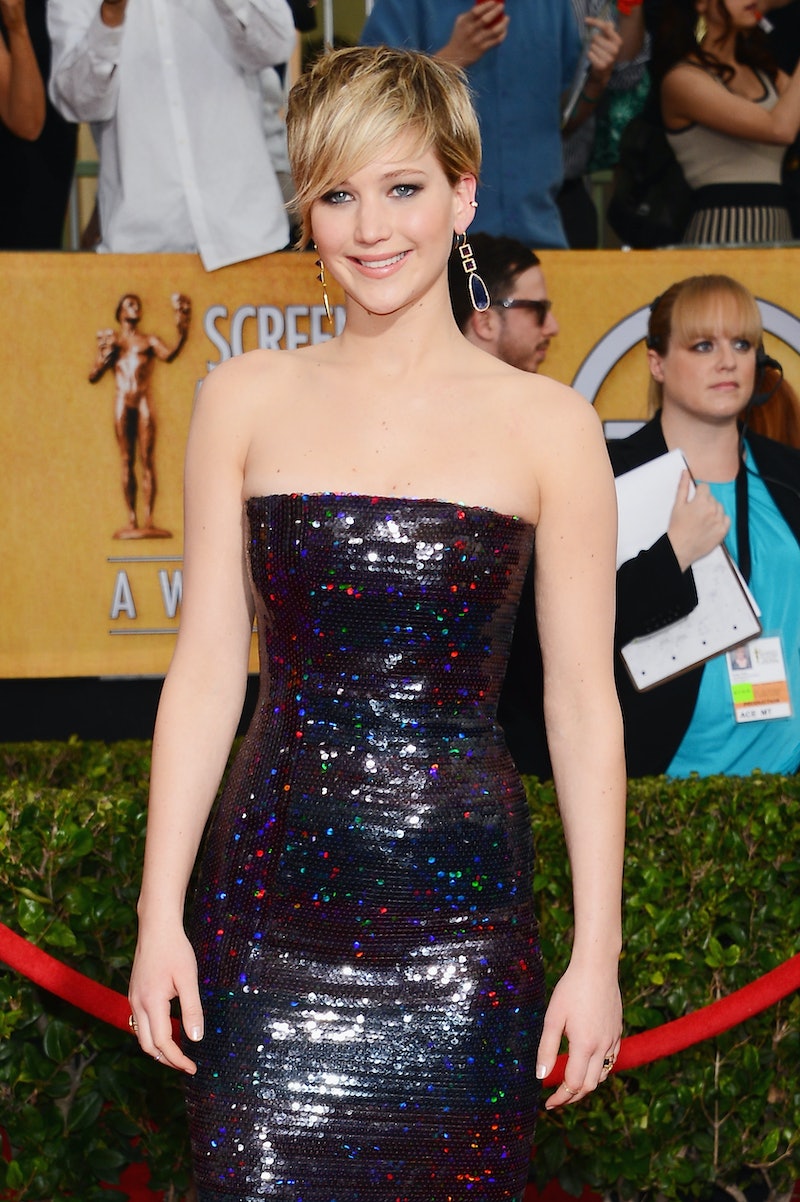 When Daniel Radcliffe did a Reddit AMA, I expected for plenty of hilarious quips and fun stories from the Harry Potter movie sets, but I did not predict that he'd be waxing poetic about Jennifer Lawrence. OK, maybe that's a stretch, but he did list her as the second person he'd love to co-star with, after George Clooney. (Though he didn't technically list in order, she was clearly the second person to cross his mind while responding.) "I just want to work with people you can get on with, and you have a good rapport with, and those are definitely some of them," he said of Clooney, Lawrence, and Paul Rudd.

This not only got me totally excited, but had my mind reeling (pun intended) with ideas for films he and Lawrence they could work on together. (Next time, I'll think of something that can include Clooney and Rudd too, I promise.) There are obvious choices like something to do with magic/young adult/sci-fi/transformations, but I also think they could play the perfect BFFs or a wackadoodle couple that sits in the corner and eats cheese at parties. Some ideas include him with an accent, while others could have both of them trying out different accents. What about a body swap? Yep, that's there too. But instead of spoiling them all, read on to see all the types of movies that Dan Rad and J Law could make together.

As seen in this year's What If, Radcliffe is perfect for romantic comedies. Lawrence hasn't ventured into that territory yet, and seeing her as a character similar to herself (sarcastic, loves food, totally unfiltered and clumsy, and not afraid to get what she wants) or one completely opposite of herself would be fun. Radcliffe could play the shy, quirky friend, or do something totally different like a reformed jerk. Bonus if it's similar to rom-coms from the '90s and early '00s, like She's All That, 10 Things I Hate About You, or even 13 Going on 30.

This would have to be a true buddy cop comedy that embraces the fun of it like The Heat rather than this year's failed Let's Be Cops. It would be even better if they had their own version of 21 Jump Street or even Rush Hour — but not a remake. Something fun and original.

At first I was going to suggest something involving magic or a dystopian future, but that would be pigeonholing them. Been there, done that. Instead, they should do a new twist on a time-travel movie. Maybe if they mashed up Back to the Future with Bill & Ted's Excellent Adventure and Groundhog Day, the hybrid would end up being genius. I think they should both travel in time, maybe even with the buddy-cop element thrown in, too. It could also be a romance, but only if Rachel McAdams appears in the movie.

Body Swap — as BFFs or Frenemies

What if Radcliffe and Lawrence swapped bodies, and in turn, accents? Hearing her with a full-on British accent and him going American would be fun, and it could be something like Freaky Friday mixed with The Hot Chick and Big. OK, maybe that's a weird mix, but whether they were best friends or frenemies who were forced to live in each other's shoes, it would be hilarious.