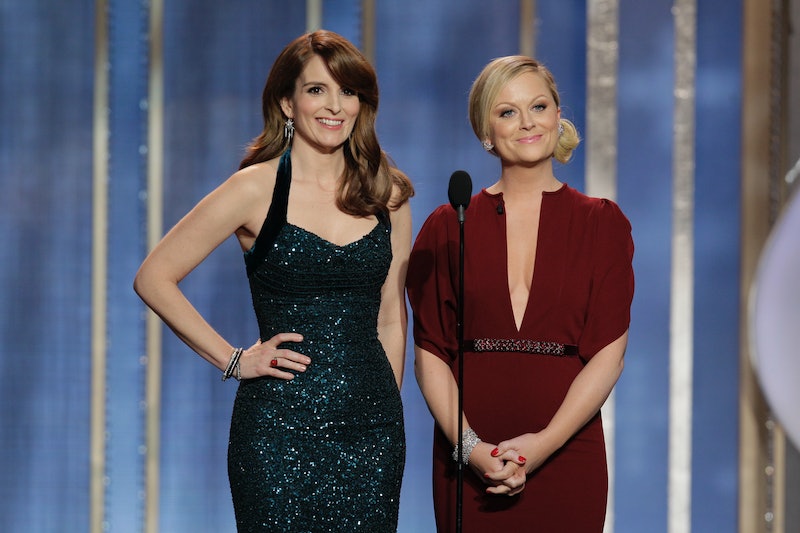 The Golden Globes are about to get a whole lot less fun. OK, perhaps that's a bit dramatic but I was sad to hear that Amy Poehler and Tina Fey will not host the Golden Globes again after the January 2015 show. When their contract ends, the pair will have hosted three times in a row. To some that may seem like a lot, but to Poehler and Fey's fans, they just want more. After the pair hosted Saturday Night Live's Weekend Update together for years and went on to star in Baby Mama together, I got used to seeing the pair be hilarious as a team.

In their hands, the Golden Globes were spectacular last year with jokes that were actually funny instead of rude or offensive like some awards show quips can be. (Seth MacFarlane, I'm looking at you.) They'll be missed as awards show co-hosts.

But as sad as the news is that this is perhaps our last Poehler & Fey team-up for awhile, the Parks and Recreation star has a pretty good reason for wanting to call it quits. "It's the law of diminishing returns, which is why this is our last time," Poehler said on the Today show. "Unless you want to be a perennial host, there's nowhere to go but down!"

While I doubt that Poehler could ever be less funny, I see her point. You never want the audience to get tired of you or bloggers to harshly compare you to your past hosting self. Poehler wants to go out on a high note and leave viewers wanting more because that keeps things fresh and exciting. Plus, it makes looking forward to the pair's new future projects that much more fun.

There's always hope that maybe Poehler will be back with Fey in some capacity whether in a show or movie or maybe another awards ceremony. Poehler did hint that maybe she'd be up for a Jay Z style "retirement" where you don't actually stop working. "It'll be like our farewell tour," Poehler joked about January's award show. "We'll be the Jay Z of the Globes and never retire."