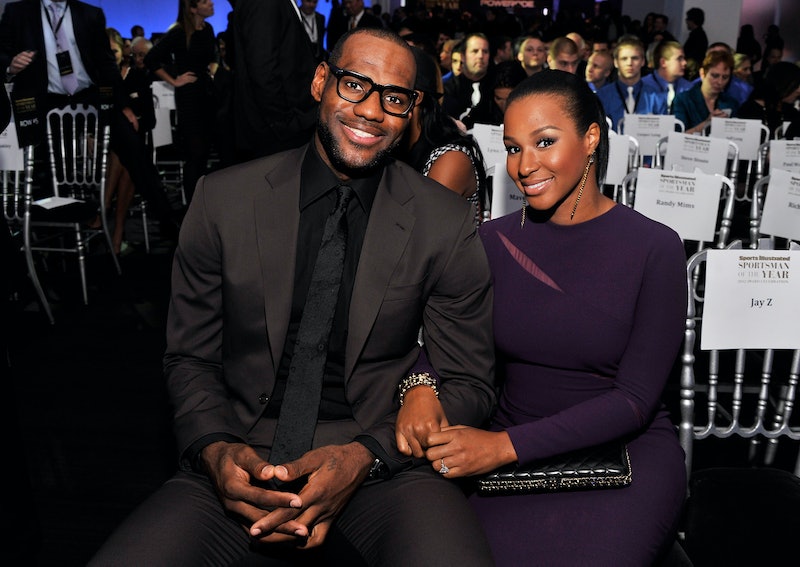 I'm a South Florida girl, born and raised, so I know a thing or two about the Miami Heat. Although the tensions are still a little bit high for many NBA fanatics after Lebron James announced his return to the Cleveland Cavaliers after two championships with the Heat, one thing that can always be celebrated is a new baby. According to Us Weekly, Lebron James and his wife, Savannah Brinson, became parents to a baby girl, Zhuri, at the end of last week in their hometown of Akron, Ohio. The couple are already parents to Zhuri's big brothers, LeBron James Jr., 10, and Bryce Maximus, 7, and seems like their little girl has been VERY anxiously awaited, with her famous father sharing in a September Instagram post, "Zhuri hurry up and get here so your daddy and 2 brothers can annoy you!" SO CUTE!

James has already expressed his concerns with raising children in the bright spotlight that he is always in, saying in an interview with CNN's Rachel Nichols, "There is no booklet where no one can tell you on how to raise your kids. And you know, every single day is always challenging. And for my kids even more challenging, because their dad is famous." But a truth universally acknowledged is that behind every great man there stands a great woman, and Savannah Brinson has truly been a massive support to James ever since they were teenagers, so we should definitely get to know the lady behind the man a little bit more.

She & Lebron were high school sweethearts

Brinson and James met as high school students at St. Vincent-St. Mary High School in Akron, Ohio, and Brinson found out she was pregnant with her and James' first child, LeBron Jr., during her senior year right after James began his first year in the NBA. The couple stayed together through the years and after the birth of their second son, Bryce, James proposed to his high school love in 2011.

When you're married to one of the most prolific athletes of all time, you have to make sure you're keeping your health right. After a months of healthy eating and juicing before her wedding in 2013, Brinson was inspired by her changing body and her trainer, David Alexander, to open The Juice Spot and create a fun and trendy place where people can get together, eat and share moments, without the guilt. The shop sells "organic cold pressed juices, superfood smoothies, [and] açaí and oatmeal bowls."

She Designed Her Own Furniture Line

In 2010, James and Brinson joined forces to design Home Court, a collection of youth bedroom furniture — something they likely felt connected to with two young boys. With her flair for fashion and interior design, Brinson took the reins when it came to design and, along with American Signature, produced fun pieces that kids would love.

She & Lebron Are Totally in Love with Each Other & Their Family

Need I say more? I think Zhuri is about the luckiest little girl in the world.