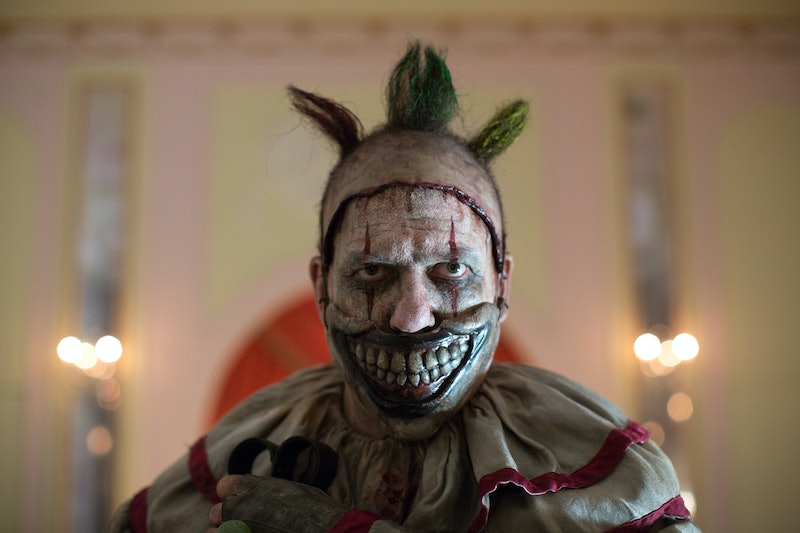 At this point, the only way to fall asleep after watching an episode of American Horror Story: Freak Show is to get the answer to why terrifying nightmare-fuel Twisty the clown is kidnapping children and hiding them away in his trailer in the middle of the woods. We've debated what he is planning to do with these kidnapped children, but never what happened to Twisty The Clown to make him so twist...ed. According to Ryan Murphy, who loves to spoil his own show (seriously, he threw away the news about Edward Mordrake like it was nothing!) has promised that this week in "Edward Mordrake Part 2," Twisty's backstory will be revealed, and we'll finally learn what makes him tick. And kill people. And kidnap children and keep them in a bunker.

All three seasons of American Horror Story use a lot of the same tropes and justifications for the characters' behavior, I'm pretty sure I was able to put together a good collection of guesses. From twisted parent-child relationships to teenage angst spun out of control, there's a good chance that if we've seen it before in Bloody Face or Rubber Man, Twisty might be cut from the same cloth. Apologies in advance for the abundance of Twisty GIFs.

Murphy absolutely loves to blame every serial killer's or emotionally damaged man-child's psychosis on a negative relationship with a distant or an overbearing mother figure. Maybe this is why when he comes across Finn Wittrock's Dandy, he lets him stick around and generally be super annoying after encountering him in the woods. Could Twisty have been obsessed with getting a smile out of his catatonic mother? She could have been suffering from undiagnosed depression or a rich girl who lost everything in the Great Depression.

He Was a "Class Clown" Gone Wrong

We've spent some time with each of Twisty's victims, and all of the children he's kidnapped so far are adorable, spoiled, lovable moppets with picture perfect lives. A teen on a date about to go "all the way?" With his deformed jaw, he could be a target for childhood bullies and been laughed at for his whole life. Becoming a clown could be his way to reclaim that laughter.

He Failed to Join the Circus

A lot of performers who will do anything to get a laugh wind up being wildly insecure, and, in some cases, emotionally volatile. And this being AHS, a rejection from clown college could be enough to fracture the man's psyche forever, desperately trying to make people laugh and so frustrated when they don't that he goes into a murderous rage. We saw it happen to Dandy. Maybe Twisty mutilated himself in order to feel like he belonged in a "freak show."

He Had a Sad Upbringing

Again, maybe I'm focusing too much on his TERRIFYING LACK OF A MOUTH, but a bad car accident or early disease could have made his childhood or adolescence a sad experience, spent in the hospital with doctors or in quarantine. Maybe he had an early encounter with a Patch Adams laughter-is-the-best-medicine type who inspired him.

He Could've Been Targeted By a Clown

Taking the early trauma in a different direction, maybe he used to be tortured by a clown. He could have taken a clown phobia and decided to steer into it, like Batman. Or maybe he suffered a frightening abuse at the hands of a clown. And yeah, of course Murphy would throw serious topics into the backstory of a psycho clown killer. I don't mean to freak (show) you out any further, but doesn't Twisty look like he might be wearing another man's scalp as a hat? We might be finding out whose cranium that is on the next AHS. Creepy!