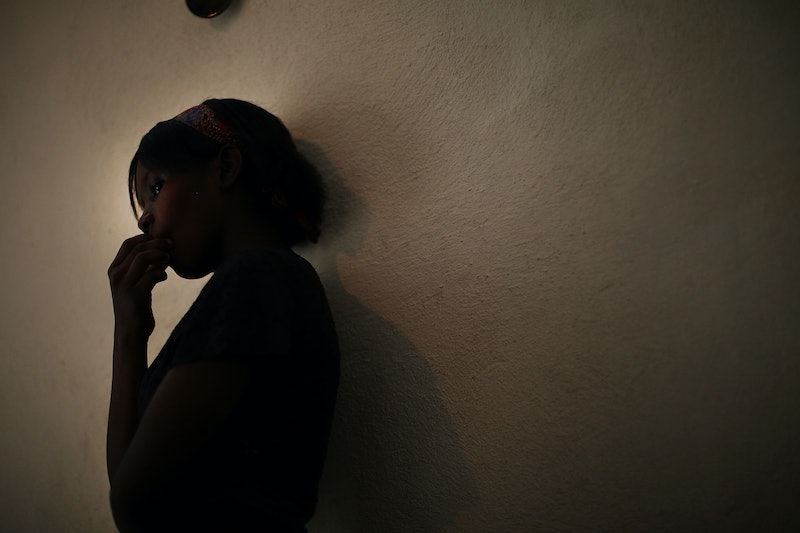 Maybe it’s the nerdy high school English teacher in me, but the word rape makes me cringe. No, it's not because I’m embarrassed to discuss the concept — it's because the word itself is terrible and outdated. Which is why I think the word rape should be replaced by the term "sexual assault."

Words tell little stories. They project a series of images, they bring up emotions. In the word rape, I see a victim in a dark alley. I see a drunk girl being attacked by a friend on the way home from a party. I see a blurry-but-unimportant assailant, and my attention is focused on the victim and his or her shame. In the term "sexual assault," I see an assaulter, a perpetrator, a criminal. I see the possibility for justice. It’s subtle, but for me, the difference is there. The phrase sexual assault is clearer, more blunt, less emotionally-charged.

Furthermore, "sexual assault" makes the perpetrator's actions the focal point — as they should be. This is an important improvement on the word "rape," which instead puts the spotlight on a voiceless victim.

See, the word rape comes from the Latin “rapere” meaning "to seize, to carry off by force, to despoil." It's associated with words like "larceny," "chattel" and "outrage." The root and cultural connotation of this word suggest that a woman’s vagina is property that can literally be stolen. Given its root, the word "rape" reduces a human being to something like a basket of bread sitting in a baker’s window, waiting to be pilfered by Jean Valjean or a tricky fox licking his lips ravenously.

If you go back to biblical injunctions, rape was considered a theft of property. The theft was that of a woman’s virginity, which belonged first to her father and then to her husband.

This biblical definition silenced women, and made their rapes a crime not against them, but against their fathers or husbands. The word removed the victim's pain, experience, and testimony from the picture. Indeed, until the early 1970s, a woman was not considered a reliable witness about her own rape — but the defendant was.

Reform movements have sought to update the definition of the term, but the word is still on the books. Slate's Brian Palmer explains:

Many reformers wanted to get rid of the word rape altogether, because it carried too much cultural baggage ...There was also, in their view, a prevailing feeling that women bore some of the blame for dressing or behaving provocatively. The phrase sexual assault, which was adopted unevenly across the country, had the ring of unprovoked violence about it.

Though the legal definition of rape has been updated a few times, each time with less emphasis on the woman's chastity and finally in 2013 with no reference to force or gender, the updates do not do enough. "Rape" is still laden with cultural myths that blame the victim, and no matter how we define it, victims are still afraid to report because of these myths.

"Sexual assault" isn't. Embedded in the term is the word assault: recognition that this crime is about using sex as an act of aggression, power, control, and abuse. It's about a dangerous person who needs to be arrested.

Some states indeed have made revisions accordingly. According to RAINN (Rape Abuse and Incest National Network), the nations's leading anti-sexual assault organization , in Colorado, Texas, Vermont, and other states, "rape" is not on the books as a legal term any longer. In Massachusetts, New York, and others, however, it is the only term used to describe any form of sexual violence. The variations and gradations get more and more confusing the closer you investigate.

In New Jersey, the phrase "sexual assault" has replaced the word "rape" in the statute books. But other states are more hesitant — and use both. In Pennsylvania, what qualifies as rape requires the use or threat of force, whereas sexual assault refers to any act of intercourse without consent.

Unfortunately, this differentiation has just created more confusion. Last year, in the aftermath of Northwestern University professor Peter Ludlow's sexual assault accusation, he sued the media for defamation because they used the term "rape" to describe his alleged actions, which did not include penetration.

Ludlow Judge Flanagan held that the media outlets who reported the story as rape were protected by the fair-report privilege, saying first that the terms "rape" and "sexual assault" were interchangeable. Later, though, the judge said that "every rape is sexual assault, but not every sexual assault is rape."

Well then, are they interchangeable, or aren't they?

As Judge Flanagan pointed out, reporters can legally use the words as synonyms. In some instances, they must use both words to cover themselves, as states differ in what the terms convey.

But journalists are also required to write and speak about sexual violence in a way that focuses on the perpetrator, not the victim’s behavior. I think that's impossible to do using the word "rape," which suggests the victim's culpability and brings shame to the victim. Flanagan is right that the journalists weren't slandering Ludlow by using the word "rape," but the media should abandon the term. "Rape" and "sexual assault" are not interchangeable; one is in fact more ethical, more modern, and more enlightened than the other.

There are people who believe that the weight of the word rape adds to the act's severity, and that it therefore should remain part of the legal lexicon. Though I can see their point — just look at how loathe Peter Ludlow was to be described as a rapist rather than someone who committed sexual assault — I believe that all the word does at this point is keep us stuck in the dark ages, and stuck in a rape culture.

"Rape," on the other hand, is a conversation. How did it happen? What were you wearing? How much had you had to drink at this point? What time was it? Were you alone on your way home? How is your father going to feel? Do you really want to report this? Somehow, when I hear “sexual assault in the first degree,” none of those questions come so readily to mind. This term feels heavier, more final, and less open-ended, as I believe it should. And in a society where 60 percent of rape cases go unreported and 97 percent of rapists will never spend a day in jail, that matters.

My theory is that the victim shaming "rape" inspires would slowly erode along with the word. With the eradication of the word, over time, victims of sexual assault in the first degree would feel as empowered as victims of any other kind of assault to report what happened to them, and police would begin to view the crime as a crime and not as a story, a question, or a charge not worth pursuing. The myths around rape would give way to the reality of sexual assault, so that no one could pretend it didn't happen, or that a victim had brought it on herself, or that it was no big deal.

Editor's note: If you or someone you know has been affected by sexual violence, it’s not your fault. You are not alone. Help is available 24/7 through the National Sexual Assault Hotline: 800-656-HOPE and online.rainn.org.