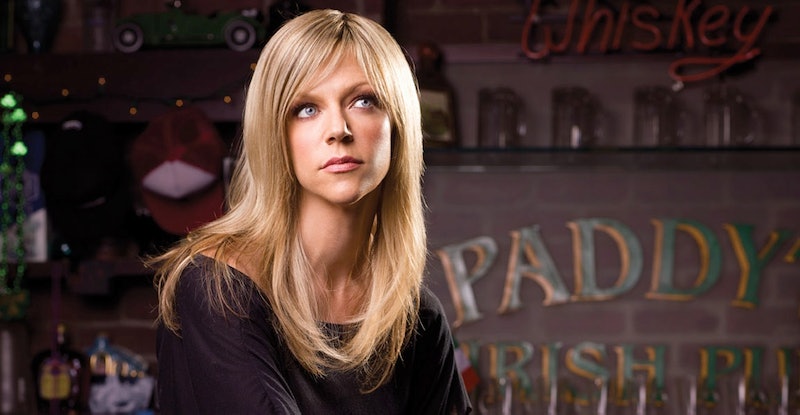 For nearly nine years Deandra "Dee" (Or "Sweet Dee"...or "Bird") Reynolds has served as the butt of her group of friends' jokes. Cracks about her skinny frame. Her need for attention, and validation. Her dancing skills. I can't imagine why she's stayed friends with Mac and Charlie for this long, to say nothing of her twin brother, Dennis, and sort of father, Frank. It's Always Sunny in Philadelphia is a comedy, but still -- we've stretched thin the veneer of believability. No one seems to like her, and it's desperately sad that she's stuck with these people as long as she has.

Tonight the gang finally drove Dee to the hollow pit of despair they've been trying to throw her in, intentionally or not, for all this time. But you know what? It's at that rock bottom place, bathed in failure and Yuengling, that Dee finally found herself. (At least until the guys pulled the rug out once more. But we'll get to that later!)

What is the only thing deeply depressed people can do to make their lives feel a little rosier? Stand-up comedy! After seeing Dee in a near-catatonic state and worrying they'd taken things too far, the guys suggested ways Dee might cheer herself up. With zero enthusiasm but therefore no shame or worries, Dee agreed to perform at an open-mic night.

That's when everything changed. (For 20 minutes.)

Honing in on the things that made her most depressed, including...

...Dee actually put together a solid and laugh-generating set. Dennis, ever the supporter, refused to believe his sister could have elicited such a response. But it worked, it really did, which only led to more good things for Dee. First she nabbed a manager, or as we know him Borat's friend from Borat. Then she opened for a gimmick comedian named "Landslide." Then she had "Landslide" open for her. Before she knew it, Dee was being whisked to Los Angeles to fill in for a sick performer on Conan. Her break had arrived...

Only for Dee to discover that her whole meteoric rise to fame -- from the first standup success to her subsequent performances and the t-shirts they generated -- was all an elaborate concoction of the guys'. Their mission? To teach Dee that she hadn't hit ROCK bottom, and shouldn't spend so much time complaining.

"Why would you do this?"

"We wanted to show you that you could sink lower."

And so the episode ended with everyone and everything back in their place, no lessons learned. Maybe Dee learned to trust the guys even less than she did before? Doubtful.