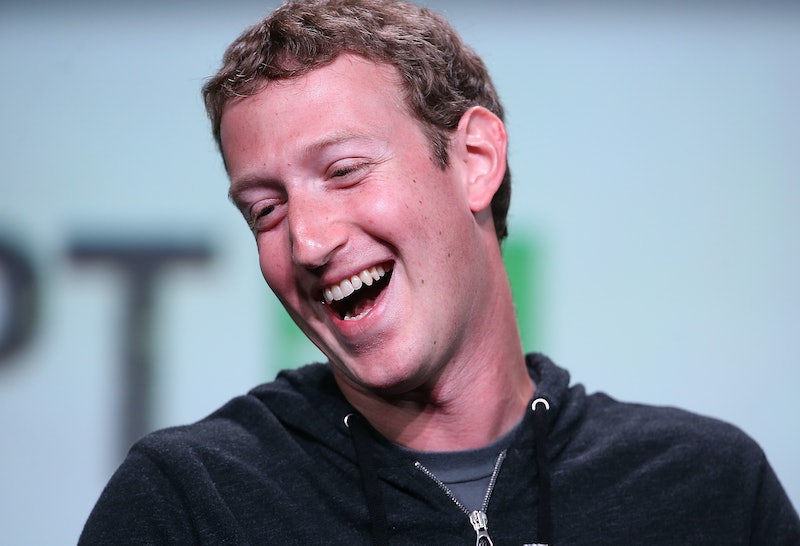 I'm not sure if anyone else has noticed, but I'm pretty sure Facebook founder and CEO Mark Zuckerberg is trying to take over the world. He's already one of the most influential people on the planet, and he isn't planning on stopping any time soon. During a conference call with investors detailing Facebook's third quarter earnings, Zuckerberg unveiled what Facebook would look like in 10 years. And what is his 10-year plan? To develop Facebook into a massive social media multi-platform platform. Breaking it down into three, five, and 10 year goals, he outlined how he plans to tackle the ever-changing social media market in order to maintain Facebook's dominance as one of the Internet's most visited websites, along with its acquisitions and projects: WhatsApp, Messenger, Search, Video, NewsFeed, Oculus, Internet.org, and Instagram.

Here's where the 30-year-old sees his projects going over the next stages of their development.

"...Our main goals are around continuing to grow and serve our existing communities and businesses and help them reach their full potential. When you look at the size and engagement of our community, our progress remains very strong. 864 million use Facebook every day and across our core products, we continue to see huge engagement."

In the near future, Zuckerberg said he hopes to continue improving the quality of ads and the newsfeed by further weeding out low quality content. He also wants to focus on Facebook's newest ad tech platform, Atlas, in order to better appeal to marketers.

While he won't be old enough to run for president, the multi-billionaire will probably start strategizing for the first step in his plan for world domination.

Zuckerberg told investors over the next five years he wants establish strong cross-platform links between Facebook and its acquisitions, particularly messaging services such as Messenger and WhatsApp. He credited Facebook's separate messaging app, which has experienced major consumer backlash, with increasing user response speeds by 20 seconds.

Zuckerberg said he also wants Facebook advertisers to be able to extend their ads across these different platforms, along with giving developers the opportunity to develop new ways to make Facebook profitable.

He'll also be old enough to run for president, so, you know, one step closer to the whole world domination thing.

Zuckerberg discussed some loftier (and nefariously evil!) goals in this section of his presentation, specifically the idea of pushing forward,"fundamental changes" in our world in order to better connect it. He spoke specifically about his project Internet.org, which is an app available in Zambia that provides free access to basic Internet services for health, education, employment, and communication.

We've already heard a lot amazing stories about how people are using the internet to add value to their lives. We hope to bring the Internet.org app to many more countries soon. ...I've also travelled to several countries and met with policy makers, key distributors and people and communities that are coming online for the first time. Increasingly industry and governments are seeing expanding Internet access as one of their core priorities. This is positive development for our work withInternet.org in our long-term goal of connecting everyone in the world.

Lastly, he discussed Oculus, a virtual reality endeavor that may play a large role in the next generation of computing platforms. Zuckerberg said prototypes of Oculus virtual reality headsets have been sent to 130 countries, where developers (code word for evil sidekicks, obviously) are experimenting in order to create games and apps for it.

He concluded by acknowledging these two platforms have a long way to go, but that the future seems bright for them from where he's sitting.

While he neglected include his even longer term goals, I'm assuming his priority for 25 years is developing an app for immortality, followed by a 50-year goal of implanting a chip in our brain so we can make statuses just by thinking them (and so he can monitor our location), followed by total world domination where he will reign as supreme leader of all things.