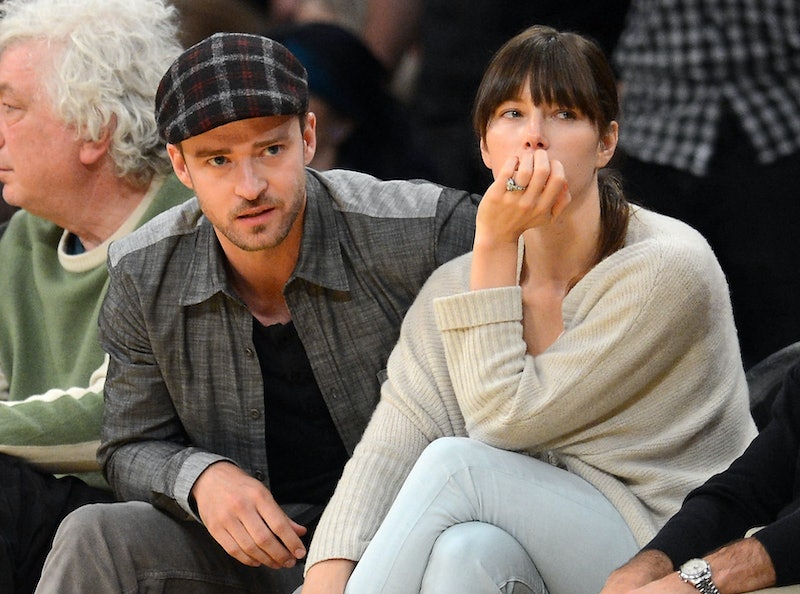 I'm already volunteering to be the one to host the prayer circle to wish that this rumor is true. However, it is only just a rumor and coming from Radar Online at that, so it has to be taken with a grain of salt. Jessica Biel and Justin Timberlake are having a baby, you guys. Their very first baby. Timberlake is going to be a father. I used to post pictures of him on my walls and practice all of his dance moves and now my preteen crush is all grown up. How time flies. I mean, Timberlake and Biel just had to shut down divorce rumors last week and now they're basically laughing in the face of their doubters with this maybe-baby bump. Not to mention the glorious puns I'm about to make. Ready? Let's go.

It's just a given that Timberlake is going to be a total DILF. I mean, this is the man who brought sexy back. However, just because he knows how to do that doesn't mean that's the kind of lesson he should be passing down to his potential son or daughter. In fact, what lessons is Timberlake planning to pass down to his potential son or daughter? This is, after all, the same performer who featured in "D*** in a Box" and "Motherlover" with the Lonely Island. I'm asking from a place of concern and not just because every time a former member of 'N Sync has a baby another part of my childhood dies.

It's just a bad idea. I'm not saying that Timberlake's work with the Lonely Island wasn't some of my favorite work he's ever done, but I am saying that maybe, just perhaps, he wants to wait until his child is in their teens before they go ahead and look that up. Am I wrong?

If you can rock a perm in the '90s and still have me find you attractive when I grow up and realize that perms are the absolute worst, then you know you've got the wow factor. Any child of Timberlake and Biel is going to inherit their wow factor and thus be the only celebrity baby allowed to have a perm if they want to.

3. Nothing makes you cry a river faster than matching denim outfits.

Were Britney Spears and Timberlake the OTP of every preteen of the '90s? Yes. Do I believe it's wearing the matching outfits that led to the eventual breakdown of their relationship and the release of the single "Cry Me a River"? Yes. Timberlake's kid should probably avoid matching outfits. And denim.

4. What goes around comes right back around.

Karma's a bitch. Timberlake wrote a whole song about that fact. And, okay, about heartbreak and betrayal and stuff, but the important lesson here is that karma will get you if you don't behave yourself. This becomes an even more important lesson if Timberlake ever wants to get his kid to do the dishes.

I don't even have a humorous statement to make here. I just think "Mirrors" is one of Timberlake's best songs and that he would want his son to find a love just like that.

Otherwise, someone is going to turn you into a meme that will live on in infamy for decades after the faux pas first happened. Then again, maybe that's exactly what Timberlake's child wants. Who doesn't want to be a meme when they grow up?