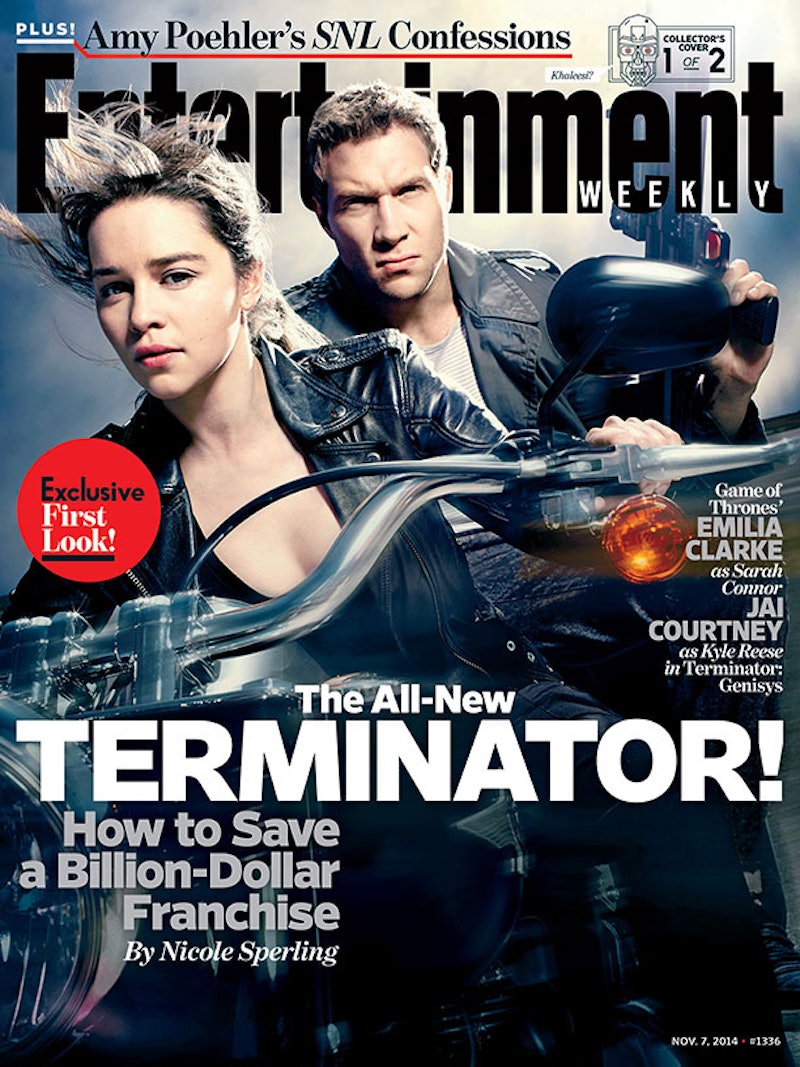 Does everybody have to be a jerk nowadays? Is it necessary that all leading players to whom we look for complex stories be callous, cold, and incapable of human connection? Have we, as a people, devolved to a point of Machiavellian survivalism that would render any act of compassion utterly unrecognizable? In short, do all our heroes need be anti? It seems like the epidemic has snagged yet another: Sarah Connor, the Terminator franchise heroine, is getting a whole new vibe in the upcoming Terminator: Genisys . She’s going dark.

A newly released synopsis for the developing film, a ret-con of sorts of Terminator canon, has Future War-era John Connor sending soldier Kyle Reese back to 1984 to save his mother-to-be Sarah from assassination at the hands of a likewise time-jumping Terminator robot. Business as usual. But the synopsis adds that Sarah Connor is hardly the woman we remember. Played in this round by Daenerys Targaryen herself, Emilia Clarke, Genisys’ take on Sarah will be “a highly trained antisocial recluse who’s great with a sniper rifle but not so skilled at the nuances of human emotion.” Why, exactly? Well, turns out she was orphaned at nine-years-old by (naturally) a Terminator, and has been raised ever since by (keep ‘em coming!) a Terminator. Arnold Schwarzenegger’s Terminator, that is — although he’ll be doing less Terminating than general child-rearing this time around. There must be a T2/Kindergarten Cop mash-up somewhere on the Internet that can appropriately explain this premise.

But is there something that can explain why we’re affixed so rigidly on the antihero shtick? When we met Sarah Connor in the real 1984, she’s your average 19-year-old: she attends college in L.A., waits tables for extra cash, and doesn’t feel the need to live off the grid or decry human contact in the name of survival. And we were fine with that! Better yet, it’s what made her such an affective character — she was normal. Put-together. Nice. (Granted, she got a bit more badass in Terminator 2, but that felt like a natural progression.)

“Nice” has since been discarded, both in film and on television, as a suitable characteristic for any hero to uphold. The small screen is littered with terrific dramatic epics that institute the various fabrics of Americana through troubled, toxic, altogether bad men. And the big screen, peddling in comedy, romance, or action, seems to favor leads of the same ilk nowadays. Adventurers must be gruff, grimacing, and in no small way emancipated from the stronghold of society. (Don’t ask me how that last one is supposed to translate to a character that society is expected to relate to.)

The trend has spread to a point of near ubiquity, prompting suspicion that the total redesign of Sarah Connor for our next turn with Terminator, a character that was perfectly suitable by anyone’s standards in her original incarnation, is more a result of this present obsession with the antihero than by anything called for organically by the narrative. It’s getting to the point where it is assumed our good guys will be “bad guys,” that no audience will latch onto a hero if he or she is, from the get-go, a regular mensch.

We weren’t always so averse to this breed. Cinema has spent plenty of time rooting for the sort of characters who held doors for strangers, filed their taxes on time, and called their mothers regularly. The original Sarah Connor was no anomaly; Indiana Jones was a sweet-natured schoolteacher, Luke Skywalker was an earnest young buck with a penchant for justice, and Martin Brody was a dutiful family man. Even more recent epics, like The Lord of the Rings or the Harry Potter series centered on youngsters of golden heart and good intention. But now, we’re stuck with grisly superheroes, prickly YA stars, and a completely new take on Sarah Connor. But why? Wasn’t she good enough when she was, you know, nice?