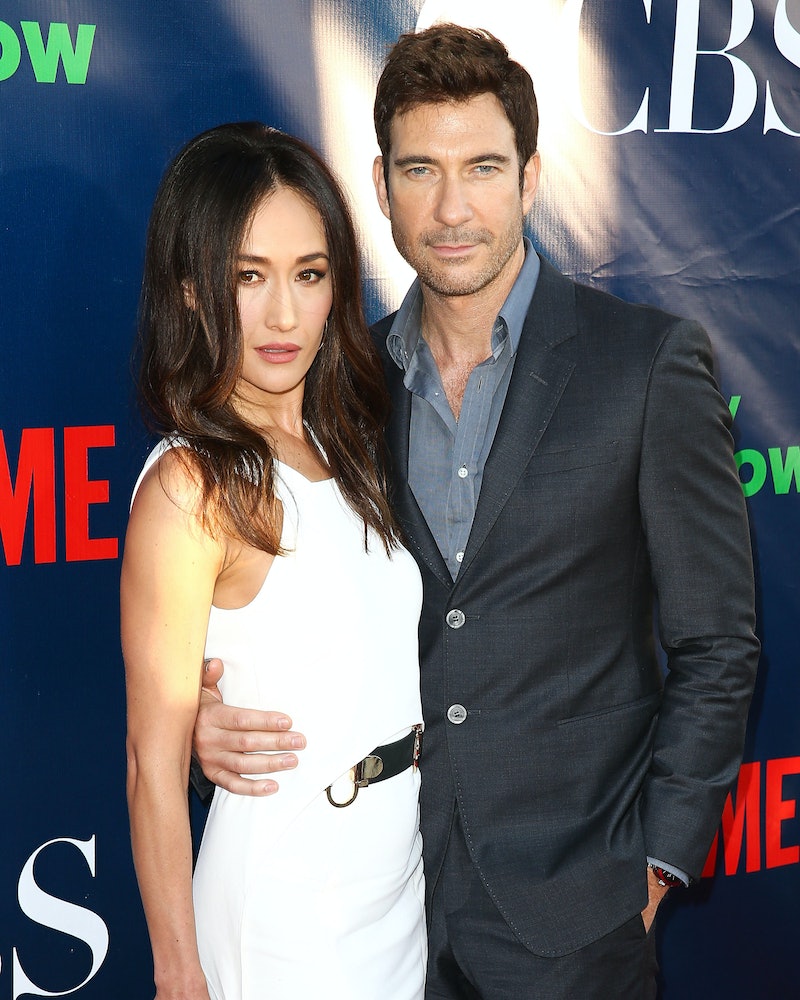 Hear ye, hear ye. Who's ready for their daily dating report? Well, you're in luck, because we have some news in the celebrity couple department. Reportedly, Maggie Q and Dylan McDermott are dating in real life. Damn. If true, talk about one gorgeous couple. Seriously (and yes, I know this sounds completely shallow, because there is so much more to a person than outer beauty), these two are off the charts when it comes to looks. Apparently, the actors have been getting close on and off the set of their CBS show Stalker. They've been spotted out and about getting "cozy," so, obviously, they're together.

Whether they are or aren't, we can hypothetically imagine them together and why'd they make one badass couple, right? Other than their appearances, I'm sure I can think of some other reasons why Maggie and McDermott (should we call them M&M?) would make one great pair. From their workout routines to their healthy eating habits to their admiration for their work to their ability to smile and cause heart palpitations to being all around kickass individuals, this duo is one couple that I'd love to see happen. With that said, here's why they'd be perfect for each other.

They'd Keep One Another Healthy & in Shape

Have you seen their killer physiques? These two are no strangers to staying fit and healthy. They clearly work out on a regular basis. Maggie could probably knock me to the ground by just looking at me, and we all know McDermott could do that with his blue eyes and sexy smolder. In all seriousness, they maintain healthy lifestyles for their career. Take Maggie, she's a vegan, so she knows how to live a healthy and animal-friendly lifestyle. As for McDermott, he knows how to get serious for his exercise routines, like when he starred in American Horror Story and had to be nude.

From Mission: Impossible III to Nikita to Live Free or Die Hard, Maggie is no stranger when it comes to battling it out on the big and small screen. McDermott's even had his fair share of action sequences. During their downtime, or when they needed to get that workout in, they could just reenact fight scenes. Talk about another great way to stay in shape and keep the relationship alive (*wink wink*).

They'd Make Each Other Smile

Have you ever noticed that these two rarely smile on-screen? But when they finally show those pearly whites, you can hear angels singing from above. Their smiles are glorious! Just think, they'd probably crack a lot of jokes, laugh, and smile with one another. Now that sounds like a lovely time, right?

They'd Constantly Woo One Another

Their chemistry on-screen is intense, just like it is with every other person they've ever acted with. Just imagine their chemistry in real life. Yowza. Let's take a moment to stare at the above photo. Yeah, Maggie, I see where your hand's at, and I can't blame you. Get it, girl. Yep, the spark is clearly there.

They'd Make Time to Do What They Love — Act

There's no doubt that these two love their work, and they just seem like two actors who'd be able to handle a relationship and a career. Plus, they're on the same TV series, so they'd be able to spend time together at work. Some might see that as a bad thing, because when would they have "me" time? Well, I like to believe that Maggie and McDermott are mature adults who'd be able to handle it all.

See, these two would make one badass pair.