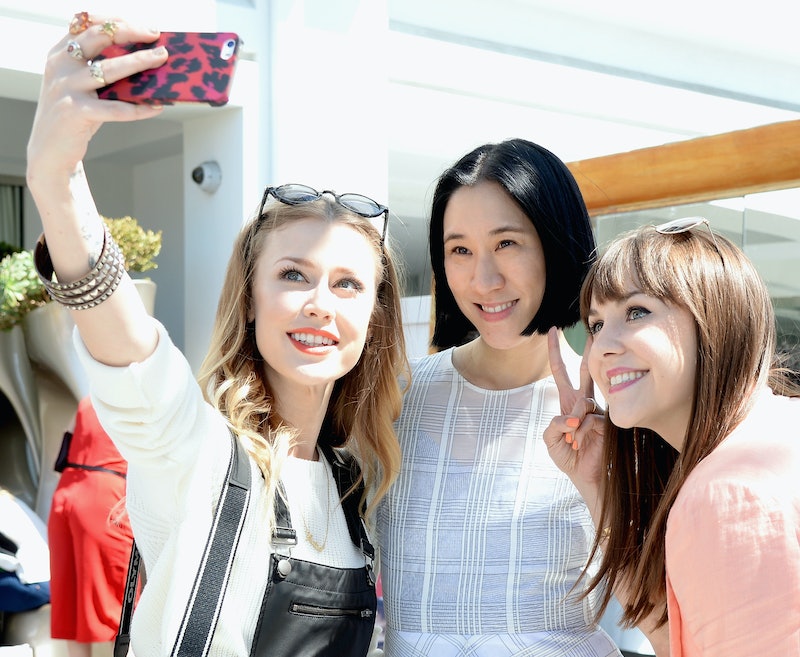 As a writer with a love for all things style, I've met countless people who have been set on that New York City, fashion magazine dream since elementary school — myself included. But somewhere along the way, after watching many fashion magazine staffers (Anna Wintour, Eva Chen, Grace Coddington, etc) gain celebrity status that eclipsed their actual professions, something about fashion magazines started to lose their appeal to me. Slowly, the celebrity-laden, celebrity-edited pages started to seem a little too hollow to me — full of a sparkly, "famous person-approved, so you should read this" message more than anything else.

It's common knowledge that part of the appeal of fashion magazines is, ironically, their exclusivity; celebrities are the center of most fashion magazines, both in content and high-up editorial terms. But even with that knowledge, as well as being completely aware that the work that goes into fashion magazines goes, far, far beyond just big-name editors, something wasn't sitting right with me. It's not that I stopped buying or even enjoying the magazines, but I certainly stopped reading the articles, using the covers as Instagram props more than anything. The magazines you choose and the celebrity editors that they represent have become a sort of bench-marker of how stylish you are, how aware you are of the who's-who in the fashion world. After all, when you think of American Vogue, don't you think of Anna Wintour before you think of journalism?

While I follow a handful of writers and editors on social media in attempts to catch a glimpse into their fairytale world, I was surprised when I saw Eva Chen, editor-in-chief of Lucky, send out a tweet that encouraged people to follow her on Snapchat. I didn't know exactly what to expect, but to me, Chen was just another too-cool-to-be-real editor with a career and a life (and shoe collection, let's be honest) that I admired, so I added her anyway.

When I started seeing Chen's Snaps pop up each day, I was surprised to find that what she was posting weren't photos of her brunching with Kanye (although I'm sure that's possible) or even primarily "look how cool it is to look here" shots of the Lucky offices. It's just Eva Chen being Eva Chen. While one day that might mean a trip to a high-end designer event, the next day it might be some shots of her favorite meal or a cute dog or a new night cream she's trying out. It's what you or I would post—OK, it's probably slightly cooler than that, but still, it's incredibly relatable. It's interesting. It's fun. It's real.

It's pretty apparent that there's no one monitoring what Chen is or isn't posting — and there's no reason anyone should either. Chen is simply using social media in the way that we all should be. What she posts is an interesting, varied collection of things that are 100 percent Eva Chen. Somewhere in the metrics of it all, executives at magazines seem to have lost touch with the fact that social is more than shares, likes, and the textbook definition of "engagement." It is simply social connectivity that makes me fall hard for your brand.

Social media is what connects brands to customers, and now, magazines to readers. By presenting a real, largely unedited version of herself on social, Chen has accessed the true social side of social media, and created a bridge between fashion magazine lovers and editors that simply hasn't been available before. While Chen still hangs out with celebrities and wears designer clothes that most of us can't afford regularly, her social media presence (and specifically, Snapchat posts) show us that hey, there's a human behind that magazine you're reading.

Of course, Chen isn't the only one who works at Lucky. But what Chen has done is take away from the celebrity status of fashion magazines and added to the fact that rather than a distant, too-famous-for-you editor behind the pages that you read, there is a real person with true talent, interests, and tastes. She has, all at once, helped separate the idea of a fashion magazine from a symbol of celebrity, and connected it to the idea of a hardworking collaboration of talented writers, designers, and creative minds. By allowing readers to peak into her daily life via Snapchat (as well as other platforms), Chen has ultimately opened peoples' eyes to the fact that fashion magazine are much more than the celebrity editors we judge them by.

When you take that perception away from fashion glossies, what you're left with is the realization that what you're buying in that Target aisle isn't just something cool that an editor-celebrity has put their stamp of approval on, but a true creative, journalistic effort. And it's then that you can start appreciating the fact that an editor didn't achieve their status via celebrity friends, but rather their talent, intelligence, and impeccable taste. While a magazine may just be a collection of "what's cool" on many levels, in essence, it's much more. It's a creation from people that are passionate, talented and probably have a lot more in common with you than you think.

As a 21-year-old fashion writer who is interested in all things social media, what Chen has done through Snapchat has altered my view of big-name editors and magazines so entirely that even the way I read fashion magazines has changed. As ridiculous as it sounds, I often found myself unconsciously purchasing magazines while thinking of the celebrity editors behind them. Almost like a celebrity-designed line of clothing, something about that name, that exclusivity, and that celebrity was exciting; it made me feel like I was tapped into a group of cool kids that other people just didn't understand.

Now I've realized that a fashion magazine is more than a celebrity name under the editor-in-chief title, but a product of someone who is a real person, with real interests and unique, changing tastes, as well as a team of those type of people. Eva Chen may still be a celebrity in many ways, but now to me as a reader and a fashion enthusiast, she's also someone who I could see being friends with — not someone who is the same as me, necessarily (that's pretty boring anyway), but someone who likes a lot of the things I like, someone who isn't too cool to post what she's having for lunch on social media or take a selfie with a cute animal.

So, as a humble member of a larger-than-life fashion journalism industry that often seems like a constant competition of who can be the closest to cool, celebrity-editor states, I have to say thank you to Eva Chen for restoring my faith in the creative, talent-filled publications that fashion magazines have the potential to be. And to other brands, publications, and "celebrities" who aren't using Snapchat yet: Take notes.