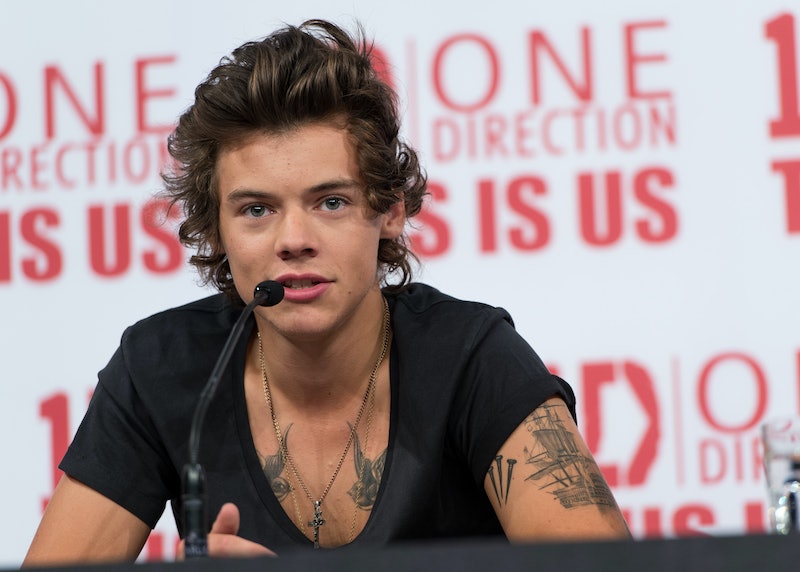 I'm slightly embarrassed to admit that I'm 25-years-old and have a massively inappropriate crush on Harry Styles. But honestly — what's not to love? That hair! That smile! And can we talk about those tattoos? Normally, I'm not big on tattoos, but in this case boy looks damn good with his 50+ tats. Yes, that's right, Harry Styles has 54 tattoos, and now all I keep thinking is where are they all hidden because at some point you just plain run out of room on your visible body parts. My self-respect just continues to plummet.

The One Direction star has been acquiring body art rather rapidly over the last two years, both in private and public. Most famously, he brought his ex Taylor Swift to the tattoo parlor to add a ship to his arm. See, even T-Swift can't resist his bad boy appeal. From more traditional ink like sparrows and crosses, to bizarre scribbles, random letters, and even his sister's name written in Hebrew, the British boy-bander clearly loves adding artwork to his body and is showing no signs of slowing down. (But really though, 50 encounters with a needle? No, thank you). So before a few more inevitably materialize, here's a look at all of Mr. Styles' tattoos... that we're able to see. Wink wink.

Hey Harry, could ya undo another button or two there?

Before you jump to conclusions, he already had the heart tattoo when he and Swiftie visited the LA tattoo parlor.

I mean, they needed to counter-balance each other.

Let's all take a moment to appreciate this photograph.

Obviously, he wears his heart on his sleeve.

A skeleton wearing a bowler hat. Done. This is my clear favorite.

So pretty much a doodle fest.

Probably his most conventional tattoo. P.S. THAT HAIR.

On his hip bones. No commentary needed.