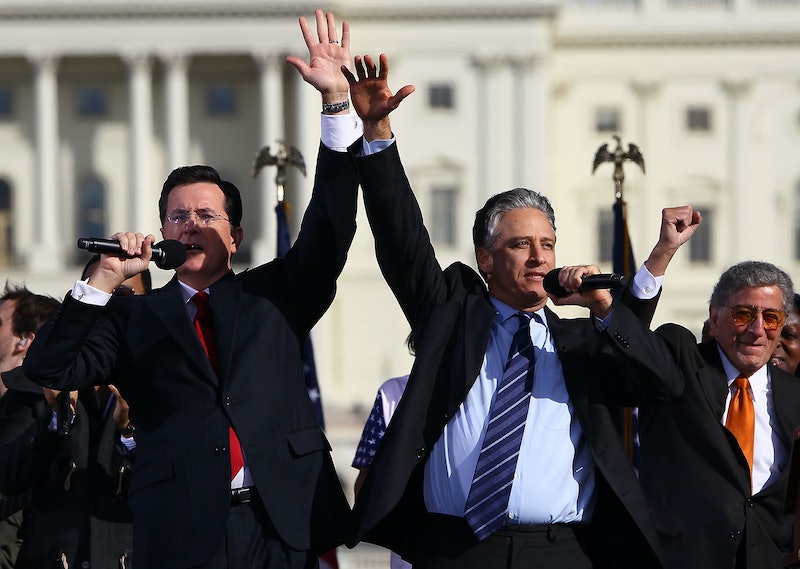 Election Night fast approacheth, and with it comes America's own unique way of dealing with itself. Thankfully that will include, as always, Jon Stewart and Stephen Colbert's hosting of a night of election coverage through The Daily Show and The Colbert Report. And since it's the latter's last year covering election night (nooooooo!!!), The Colbert Report 's going out with a bang: Their election night coverage title is rather outrageous.

Commentating on the fate of the nation from a comical standpoint is probably one of the harder broadcast jobs out there, but perhaps easier than it is to try to keep a straight face. And oh, they are readying us to laugh through our pain. The Daily Show's election special title is relatively straightforward: "Democalypse 2014: America Remembers It Forgot to Vote."

The Colbert Report's, though? That one's such a doozy it's getting its own block quote:

Midterms ‘014: Detour to Gridlock: An Exciting Thing That I Am Totally Interested In—Wait! Don’t Change the Channel. Look at this Video of a Duckling Following a Cat Dressed Like a Shark Riding a Roomba! ‘014!

I used to be scared for election night. Now I'm both scared and pretty psyched.