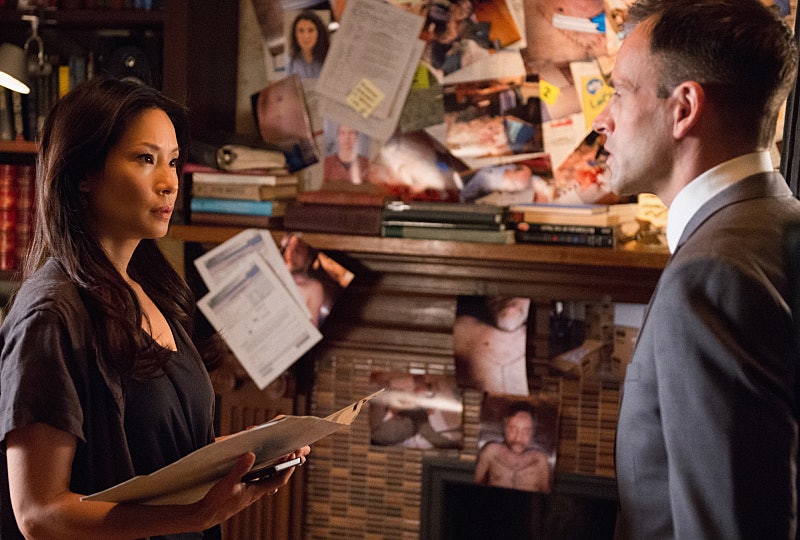 Look, I love a "will they or won't they" as much as the next girl. I've watched handfuls of iterations of the "head" and the "heart" on procedural shows become more than just the perfect team. Examples include Bones, Castle, and The X-Files. However, I draw the line when it comes to CBS' Elementary . Sherlock and Joan are a platonic pairing and they will always be so. They are an incredibly strong platonic pairing, which there aren't enough of on television. Unless you think Ichabod and Abbie on Sleepy Hollow are platonic, in which case I ask you to kindly get out. See? This is against my instinct! But Joan and Sherlock are like work spouses. That's a thing that exists.

Sure, last season Joan started sleeping with Sherlock's brother Mycroft and to say Sherlock was upset by this would be an understatement. However, I'm not convinced it was that kind of jealousy. He did at first comment that their dalliance was a "transfer of feelings" on her behalf, but here's the thing about Sherlock Holmes in almost every version of the classic tale — he's going to speak his brutally honest thoughts without consideration of the emotional implication. I think the fact that Joan is his only friend and Mycroft is one of his least favorite people was enough of a betrayal. Would you like a Harry Potter metaphor? It's like how Ron feels when Harry starts dating Ginny. But now imagine that the Weasleys hate each other. Just like that. If you're still not convinced, here's why Sherlock and Joan should be just friends for, well, as long as Elementary lasts (so hopefully forever).

Honestly, one reason I don't want them to get together is because it dilutes the choice to have Watson be Joan instead of John. I would hate to think that Elementary's gender-swapping was just a way of letting the famous literary characters finally kiss without portraying a gay relationship. With a cast that boasts racially diverse and transgender characters, Elementary is one of the most representative shows on television. I think turning this very strong, working intellectual partnership into a heterosexual romantic relationship would cheapen that a bit.

Executive Producer Robert Doherty has said it time and time again, including to The Hollywood Reporter last year: "...it's just not what we set out to do. At the end of the day, it's too easy to turn it into a romance. We've been happy with what we've done up to this point, so I don't see any reason to mess with it. We want to mess with Sherlock's life and Joan's life in many other different ways, but we don't have to put them together."

Honestly, Sherlock and Joan need to work on their professional relationship before even considering anything else. There was a very sweet scene in the season finale where Sherlock asked Joan not to move out of his Brownstone. He said that their relationship has proved to him that he is able to change, and will change for her. However, she turned him down in order to break out of his orbit (see above) and be her own woman. Which is a shame, because the two of them living together was one of the show's biggest sources of humor.

Still, go Joan! Nobody should aspire to be a sidekick. That scene had all the cadences of a heartfelt breakup, but it wasn't one. Isn't that more interesting? I think so. Sherlock then left, with heroine in his pocket, to work for MI6, British Intelligence. Yikes.

The Boy Is Mine

There's this tiny obstacle as well. Who the hell is Kitty? When Elementary Season 3 premieres this Thursday, Sherlock has a new protégé when he returns to New York. Ouch. Her name is Kitty Winter and she will be played by Ophelia Lovibond. According to the CBS press release, Kitty "allows her jealousy of Sherlock and Joan's work rapport to override her better judgment." Tough luck. I suppose she will be the Mycroft of this season.

However, notice how they specify "work rapport" and not just general rapport? Also, according to TV Line, Joan is in a relationship when Sherlock gets home as well. Stay away, 'shippers. Elementary isn't allowing you a single inch!