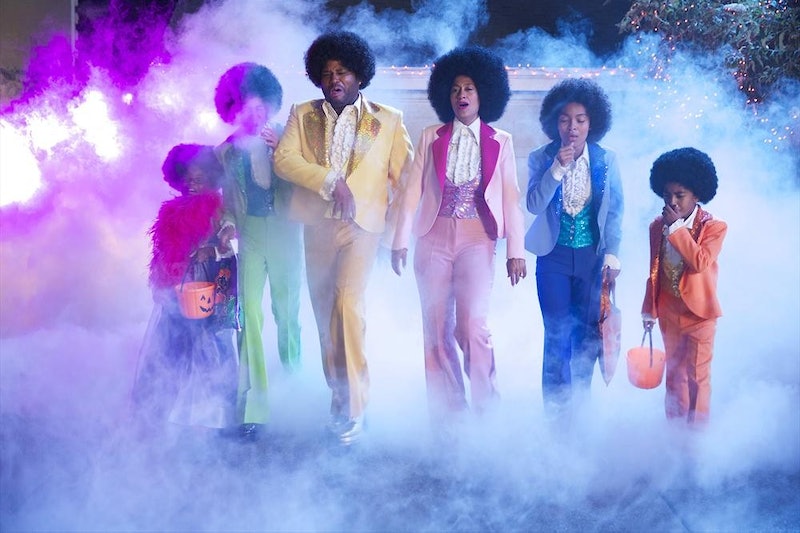 Now that we're just days away from Oct. 31, the celebrating is starting early, on Halloween episodes of our favorite shows. Like their timeslot partners the Dunphys, this week we find out that black-ish 's Johnson family also loves Halloween. What a seasonally appropriate time for us to find out! Rather than Dre going through a crisis because his kids are too old for costumes or trick-or-treating, instead it's because they've outgrown the family tradition of pulling pranks. Now personally, I hate pranks. I am far too easily tricked/extremely skeptical because I am so easily tricked to appreciate arranging or being the victim of pranks. But I am more than down for a different take on family Halloween stories. In some parts of the country, there's a tradition of "mischief night" or "cabbage night," a night of pranks on Oct. 30, so pranking and Halloween have always gone hand-in-hand. And Dre smothering Junior with a chair monster is downright sweet compared to the pumpkin-smashing, TP-throwing, and sticking-forks-in-lawn-ing of mischief night pranksters.

Sidebar: It was strange to hear Jack and Junior name drop Star Wars Legos. Disney is taking their love of shared universes and crossovers to another level. It used to just be that characters on every ABC sitcom would talk about how much they love Scandal.

I was pleased to see the return of Charlie Telphy, but a lot of Dre's work storyline didn't exactly make sense — pranking is simultaneously a longtime work tradition, according to the boss, yet Dre seems pleasantly surprised to see Josh pranking for the first time. And trying to shoehorn in the social commentary about black men being surprised — as if anyone loves being caught off guard — feels just plain awkward. But there's nothing more hilarious than Deon Cole punching an unsuspecting white man for assuming he knows Jay Z. (Also, if both Dre and Charlie know RuPaul, we need Ru to guest star on an upcoming episode. Please.)

This is what I mean when I say black-ish should lean into its weird side, its funny side. It doesn't have to always end on a lesson. Go for non-sequiter jokes and a big, funny, finale. This interlocking series of reveals of who was pranking whom is great, and bringing together the two sides of the story (plus the refrigerator running joke) feels like a proto-Seinfeld move. Black-ish doesn't always have to teach us something. Sometimes it's great to just go out on a sight gag of all six Johnsons dressed like the Jackson Five.