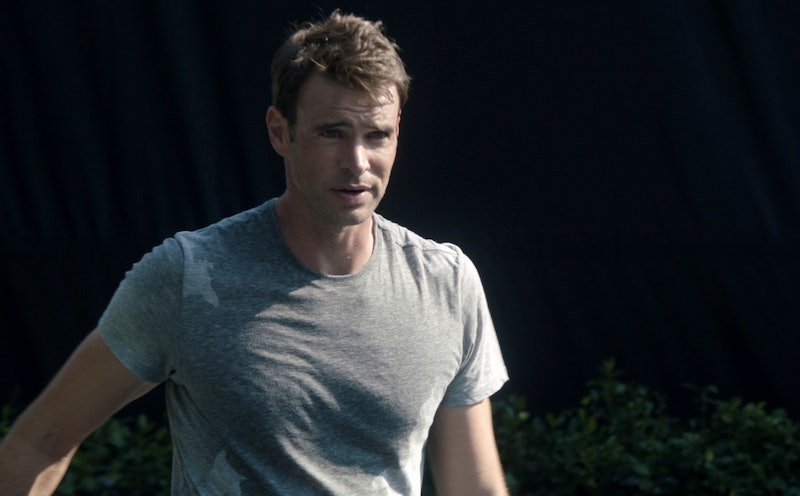 I have been deeply in love with Scott Foley since his days on Felicity, despite the fact that I was way too young to watch it. And when his character on Grey's Anatomy got killed off? I was totally heartbroken. But now that Foley's joined Scandal, all that's behind me. Not only is Foley precious himself, but Jake Ballard is one of my favorite characters on the show. Things aren't looking too good for Jake right now, though, and I hate to think that he might be a victim of Shonda Rhimes' unforgiving axe once again. If Jake dies on Scandal , it would totally ruin the entire show.

It's true: Scandal was fabulous before Jake, largely due to the fact that there is no female character on television right now who kicks as much ass as Olivia Pope. But now that Jake's here, he has to stay, or the show is going to suffer more than Olivia ever will if her (current) main man Jake is killed. A Scandal without Jake is worse than no Scandal at all. Why? There are too many reasons to count, but here are a few of the most important ones.

It would ruin all of Olivia's character progression.

After being hung up on Fitz for so long — a relationship that was doomed from the start — it's refreshing to see her finally giving Jake a chance. The best part? She just started calling Jake her boyfriend, and seeing her move on is a beautiful thing. If Jake was killed off now, it would probably ruin her for all future relationships, and I really don't want to see that happen.

Jake is a fan favorite, and his death would piss a lot of fans off

I'm not the only one who turns to mush every time Jake appears on screen. A Scandal without Jake is way less sexy. Just saying. And being that I want Scandal to last forever and ever, the show losing a big chunk of its loyal following would be bad news.

Of course, Harrison disappeared from Scandal for a good reason, but actor Columbus Short's mistakes don't mean that Harrison wasn't a beloved character. Getting rid of Harrison and Jake in one season would be a really risky decision and would probably cause all kinds of backlash. Being that Scandal fans root so hard for Olivia, seeing her put through so many traumatic events would be really unfair.

Who wants to end a love triangle prematurely?

I have this vision that the love triangle between Olivia, Fitz, and Jake will only be resolved on or near the series finale, and we are nowhere close to that right now. I'd hate to see an opportunity like that lost because Jake was killed. If you want to kill Jake, fine (not really), but do it at the end and in a valiant way — not because of something he's obviously not guilty of doing.

And besides, Olivia and Fitz? So boring.

Their back and forth, which was so exciting at first, had become a snoozefest before Jake came along. Do we really want to go back to that? Jake in the middle keeps their forbidden love interesting, even if I want Olivia to ride off into the sunset with Jake in the end.