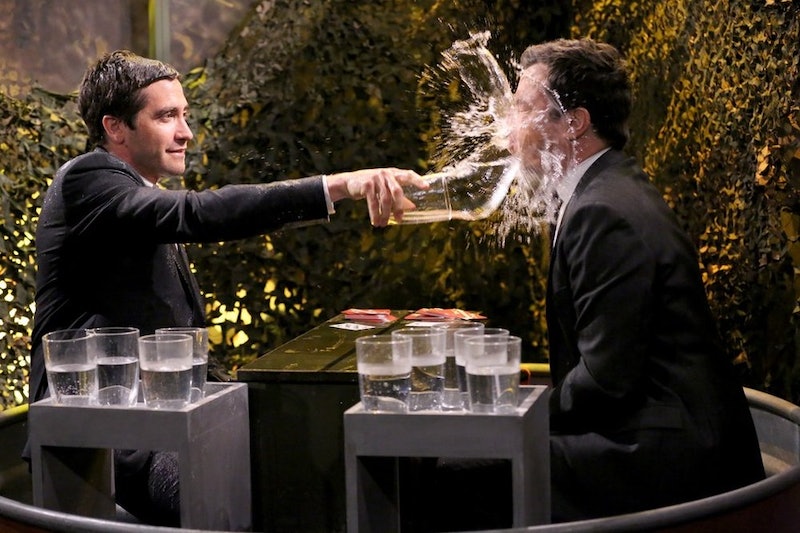 Lindsay Lohan, I'ma let you finish, but Jake Gyllenhaal and Jimmy Fallon's Water War was the best of all time. In fact, the duo was so fun to watch on the Tonight Show segment that I think Gyllenhaal could be Fallon's new No. 2 (when Justin Timberlake isn't busy, of course). Surprisingly (but thankfully), Gyllenhaal didn't channel his Nightcrawler character to get into the intense "war," but Fallon made sure his opponent knew that this wasn't all fun and games. (OK, but it mostly was.) As the cups and pitchers of water were thrown, the screaming escalated in the best way. "This one's for my family!" Gyllenhaal screamed before tossing water Fallon's way. They even got inventive with their pouring, standing up to drizzle water on the other's head like a torturous Ice Bucket challenge or dumping one directly on the other's pants. Classic. Now, if only Gyllenhaal had taken his shirt off. He missed his calling for Magic Mike.

Though I won't give away the victor, his final moments with an enormous water cannon make this video worth watching until the end. Actually, watch it a few times over — Gyllenhaal's charming laugh mixed with looking like a puppy dog that got locked in the rain makes me understand why Taylor Swift wrote a whole album about him.