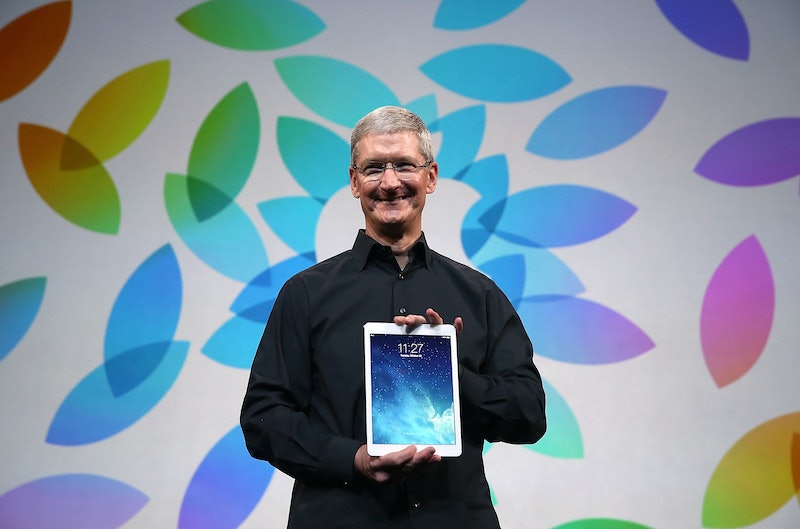 On Thursday, we were all given one more reason to love Apple when CEO Tim Cook announced he was gay in a heartfelt, honest essay — officially making him one of the highest-profile LGBT business leaders in the world. Of course, Cook's being so high-profile has meant that everyone and their grandmothers have weighed in on the piece, and, seriously, some of the reactions? Just plain bizarre.

Although there's been widespread speculation about Cook's sexual orientation for a while now, Thursday was the first time that Cook officially came out of the closet. "Let me be clear: I’m proud to be gay, and I consider being gay among the greatest gifts God has given me," the notoriously private CEO wrote in the Bloomberg essay. He added:

If hearing that the CEO of Apple is gay can help someone struggling to come to terms with who he or she is, or bring comfort to anyone who feels alone, or inspire people to insist on their equality, then it’s worth the trade-off with my own privacy.

It was a courageous move, one that will surely inspire others out there to be out and proud. But it's drawn a whole range of other, uh, interesting reactions too: from a Russian official who thinks Cook should now be banned from the country, to Sen. Ted Cruz's unwavering commitment to the iPhone, the spectrum of responses to Cook's coming out piece is both wide and weird...

Wait, Didn't We All Know This Already?

Apparently, for a lot of people in the Twittersphere, Cook's news was old news. Many a confused person took to social media to ask: Wasn't everyone already aware of Cook's sexual orientation? Which is a fair question, considering he was accidentally outed by CNBC this summer, not to mention he was featured on The Advocate Magazine's top "Out" list. But until they say it themselves, it's just the rumor-mill, folks.

Of course, there's the negative reactions too.When St. Petersburg city council member Vitaly Milonov found out about Cook's sexual orientation, he had no qualms about stating his feelings outright. Said he, as quoted by BuzzFeed:

What could he bring us? The Ebola virus, AIDS, gonorrhea? They all have unseemly ties over there. Ban him for life.

Ted Cruz: Er, Uh, I Still Love My iPhone Though

Then, sometimes, there's the downright confusing. On Thursday, Rep. Ted Cruz (R-Texas), Mr. Homophobe himself, was asked what he thought of Cook's coming out. He said, oh-so-logically:

Listen, Tim Cook makes his personal decisions, and that is his life. My focus is on the constitutional question of who has the authority to make decisions. I support marriage between one man and one woman. And I support the Constitution letting each state decide each marriage law consistent with the values of their citizens.

Then he added, because he knows what's important: "Those are his personal choices, I’ll tell you I love my iPhone."