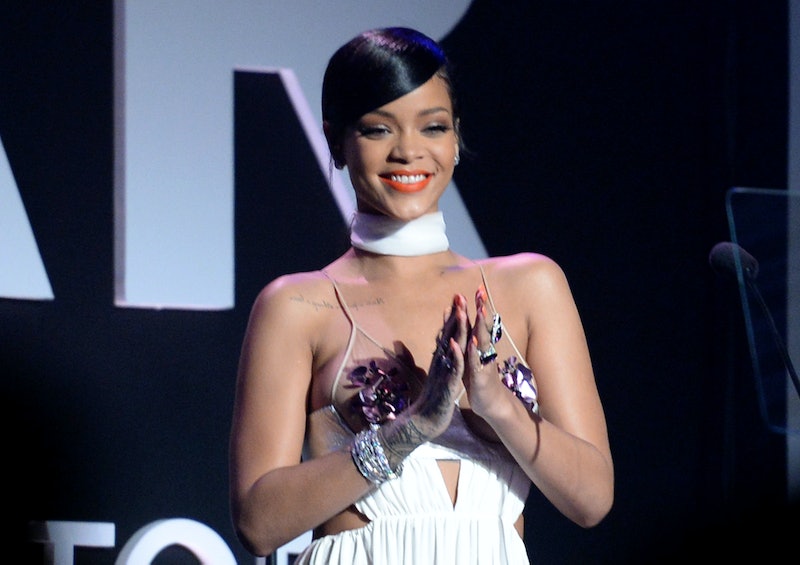 Rihanna spent more money on Wednesday night than most people make in a year. No, in SEVERAL years. But she had a very good reason: Designer shoes!!! Holla! I kid, I kid. In reality, Rihanna spent $335,000 at the amfAR Gala auction, according to reports. And she wasn't even the celeb who spent the most! Miley Cyrus reportedly spent $500,000 while Justin Timberlake contributed $80,000 to the charity. I'm overwhelmed just hearing this. If I was there, I probably would've passed out.

AmfAR, the American Foundation for AIDS Research, held their Inspiration Gala on Oct. 29 "to celebrate men’s fashion and style while raising funds for amfAR’s lifesaving AIDS research programs," as explained by their website. The Inspiration Gala began in 2010, and this year's event honored designer Tom Ford — this explains Rihanna and Miley's choice of dress for the evening.

During the event these is an auction, and this is how these celebs ended up spending so much money. So what did they get for all that dough? The Daily Mail reports that Rihanna spent her six figures thusly:

$35,000 on Harry Winston diamond link earrings featuring 72 diamonds set in platinum and a further $100,000 on the photograph Elizabeth Taylor at the Eden Roc by Willy Rizzo, signed and numbered by the artist.

Timberlake is said to have "won a Damien Hirst painting for $80,000." As for Miley, she "dropped a whopping $300,000 on a print of a naked woman by photographer Ryan McGinley." Rihanna and Miley then both donated another $200,000 to the fund.

It makes a lot of sense that these celebs would be so free with her money in this situation. For one thing, the money goes to a great cause. I say, if you have half a million dollars to spend, spending it on a charity is an excellent choice.

Second, there was bidding involved. I imagine it is very freeing to spend a TON of money with no consequences, for a good cause, AND get to do it simply by raising your hand enthusiastically. I mean, just look at how much fun Rihanna had:

According to E! Online, Miley Cyrus got into a bidding war with Rihanna and Tom Ford over the painting she bought. Bidding war??? How could you resist?!

Third, it sounds like there was a ton of alcohol at this party. Reportedly, when Miley went on stage to talk she said, "I'm a little drunk. That's why I'm a half a million deep." And at one point Gwyneth Paltrow, the host of the evening, allegedly said, "I'm drunk now so this isn't fair. And Miley Cyrus has so much more money than I do. What the f--k?"

All of this makes for the perfect storm of celebrities spending money. Way to go, guys. Spend that money! Support that charity! Sip on fancy drinks and raise your arms in the air for expensive paintings!