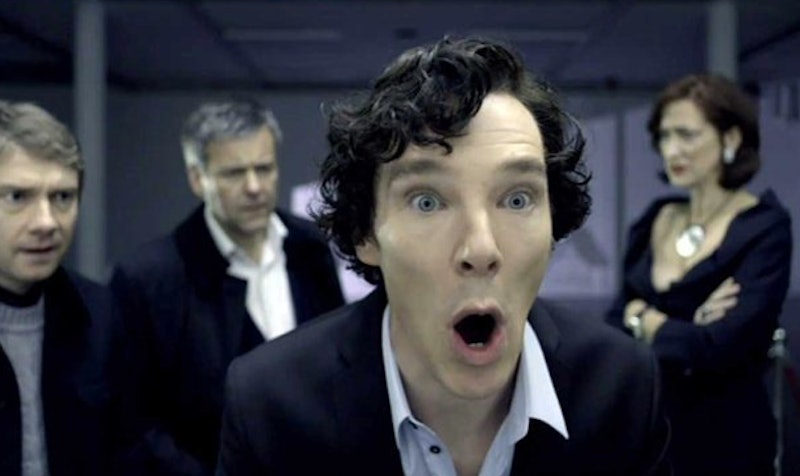 Well. I... Hmm. Yeah. Benedict Cumberbatch has officially thought about Sherlock Holmes' sex technique too much. He's been playing the character for three seasons on BBC, and I feel pretty comfortable saying after this... revealing interview with Elle UK that... yeah, he's thought about this too much. When asked about what it'd be like to have sex with Sherlock, Cumberbatch went into... a level of detail that was entirely unexpected. He's got some ideas.

The answer starts out technical:

I’d do a little experiment to do with durability, length, girth, and um, strength [of the prophylactics]. And um, I would probably take a lot of vitamin supplements to make sure that I could perform, and had had my sleep, and probably not had many cigarettes. Or drink, for that matter. Not that he does drink.

Are you ready for the rest of this? This is where things get... yeah:

And I’d know exactly how to get that person into it, and get pleasure out of making that person feel pleasure to the point that I probably wouldn’t even have to enter…

Benedict, hun, you are going above and beyond the line of duty for this answer...

But when I did it would be explosive.

To be clear, because I am still bemused by this: Benedict Cumberbatch actually said these words! In fact, he said even more of them! He goes on! You can read the rest over at Elle. He talks about going wild. So. Yeah.

Could this easily just be shameless pandering to his demographic? Surely. Do I care? Not really. The only thing that would have put this more up his demographic's alley is if John Watson was involved.