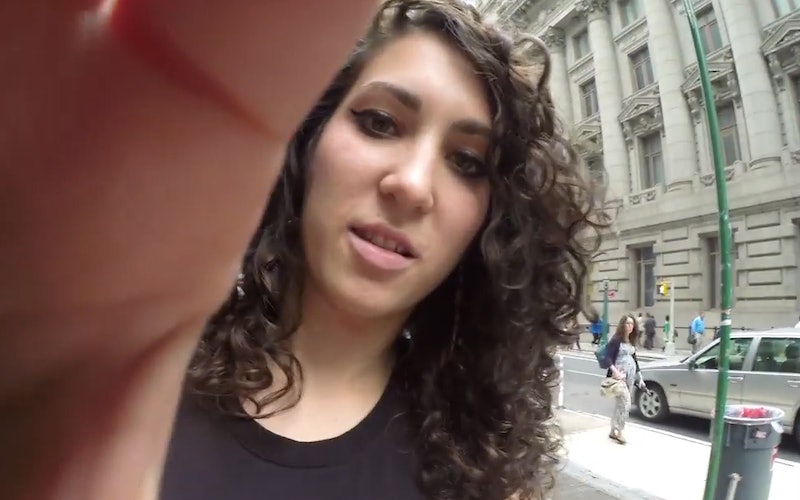 You've probably seen it — or at least heard of it — by now: The video that shows a woman getting more than 100 catcalls as she walks through the streets of NYC for 10 hours. The now-viral video opens up a fresh conversation and contributes to an important ongoing discourse about our society's deep-seated sexist mentality that perpetuates this kind of daily and pervasive female objectification. In other words, we needed this. Unfortunately, there's one caveat: the catcalling video edits out the white men, so the majority of the predator-like catcallers are either black or Latino. And the director not only confirmed this, but also justified it. Oh, and the woman in the video is white, so you can see where a racial divide starts to form.

The video, which is just short of two minutes, stitches together footage from over the course of 10 hours and ends with the caption: "100+ instances of verbal street harassment took place within 10 hours, involving people of all backgrounds." However, the video suggests otherwise. The video's director, Robert Bliss, who heads a viral video marketing agency called Rob Bliss Creative, explained the video's omission of white men on a Reddit thread. Instead of admitting the oversight and apologizing, he defends the video's final sample of men.

First he says that the predominantly black and Latino men in the video reflect the NYC population overall:

Then he says that by emphasizing on the two men who follow her, he had to allot them more screen time.

Two guys, the ones that follow her and by chance were black, make up nearly half the video. So two guys represent literally half the video. What if they were Russian? Does that mean we're saying Russians make up half of cat callers? Which only reinforces number 3...

The third reason? The sample size is too small to perfectly reflect everyone who catcalls.

This is a very, very small sample size. It's just 18 scenes.... That's why we put at the end that people of all backgrounds catcalled, because that's the truth, and we knew that just 90 seconds wasn't going to be able to be a perfect cross section of who cat calls. And by setting a 10 hour time limit, we didn't have tons of material to create a video with 100% ideal ratios regarding the race of who catcalls.

When New Republic reached out to Bliss about the omission, he gave additional reasons, saying that scenes involving white catcallers were either too short or had audio or video distortions. "We didn't set out to make this a perfect representation," he told them. "I make viral videos for a living." This suggests that his priorities weren't so much the social impact the video would have, but rather, how much traffic and revenue it would generate. Which is problematic. A video of this nature can be a powerful tool, and in order to use it responsibly, it needs to be carefully forged.

When the initial wave of support died down, people started to point out the video's glaring racial implications.

Some are pointing out that the vilification of these black and Latino men are perpetuating racial stereotypes, and racists are actually using the video — whose intention is to comment on sexism — to validate their racist beliefs. Some are also saying that the video is on the wrong side of the class war. What a mess, and a shame, because it totally overshadows the video's intended purpose.

One simple way the video could have avoided coming off racist and classist?