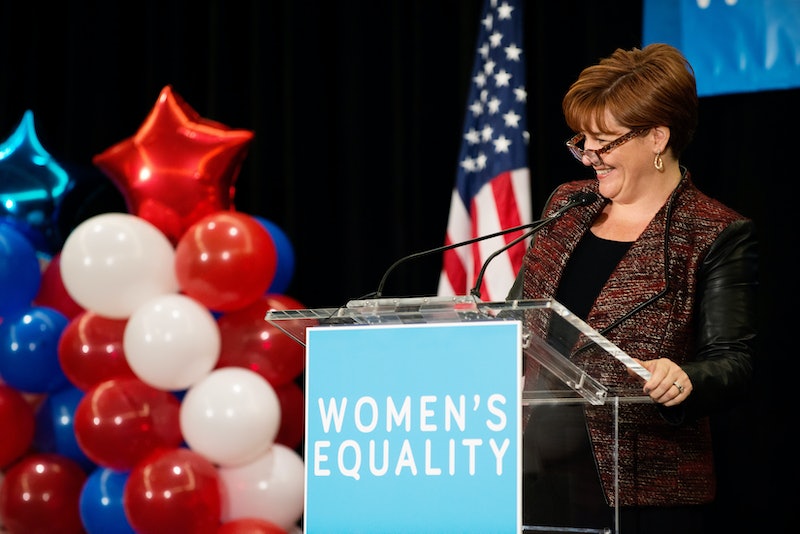 For Christine Quinn, the third time's the charm. The former New York City Council speaker is currently spearheading a large-scale campaign effort for women's rights as the spokesperson for the Women's Equality Party — a movement with the immediate goal of reviving support for the state's failed Women's Equality Act. The omnibus bill features 10 different planks strengthening protections and fundamental rights for women, from laws against pregnancy discrimination in the workforce to tougher policies on domestic violence.

Having floundered twice in the New York State Senate, the act drove a wedge between New York's Republican and Democratic legislators, including a group of "renegade" Democrats who sided with conservative members to help stall the pro-women bill in June. But women "are not going to take 'no' when it comes to full equality," Quinn tells Bustle in an interview.

Despite its moniker, it's not a party just yet — as a "ballot line," New Yorkers can vote for, say, Cuomo and running mate Kathy Hochul under the Women's Equality Party line rather than the Democratic Party banner. If 50,000 votes are cast along the Women's Equality Party line on Nov. 4, then it becomes an official political party in the state of New York. And that, Quinn tells Bustle, is when the fun truly begins."We want to put these issues — abortion, equal pay — right out there," Quinn says. "They are critical to women and girls and families, and they need to be raised and discussed as such."

With The State Legislature Balking On The Women's Equality Act, It Was Time To "Up The Ante"

"Can't pass a bill? Let's start our own party!" may sound like a strange thought process, but Quinn believes it was time to add "more political muscle" to pro-women issues. "We simply weren’t getting the job done," Quinn says. "And we know that when you lose, and lose, you can’t just keep doing what you were doing over and over again."

Although supporters of the Women's Equality Act have been forging a Sisyphean task over the last few years, Quinn says the formation of the WEP isn't so much "a defensive effort, but an offensive one." "There was a recognition we needed to pick up ground. We need to get more pro-women’s equality candidates elected in Albany, especially in the State Senate," she continues. "To do that, we’re pulling together this party to make sure that elected officials really know that our [women's] issues are not 'other.'"

The Republicans Say It Was All About Abortion, But That May Just Be A Case Of Dirty Politics

The Women's Equality Act faltered in the New York State Senate, twice, because of staunch opposition to the abortion provision, the bill's No. 10 plank that codifies Roe v. Wade as New York health law. According to Quinn, that means: "If, God forbid, following on the heels of Hobby Lobby or something else, we lose choice in the Supreme Court, we have a state law that protects and codifies choice."

However, Republican legislators, as well as some Independent Democrats, found the provision contentious. They claimed it would further expand abortion access in New York, including to late-term abortions, because the bill provides more protection for abortion doctors and allows women to obtain a late-term abortion if their physical or mental health is in danger.

Like most of her colleagues, Quinn says these allegations are unfounded. "Now, I don’t know about you, but in the past 40 years, I’ve never heard of or seen a dentist performing an abortion anywhere in the United States," Quinn says. "But our opponents say very clearly that’s what’s going to happen in New York if we codify Roe v. Wade. So, they’re lying on top of lying on top of lying."

Republicans in the State Senate said they would pass the first nine planks of the act, and some legislators called for a vote on individual provisions, such as human trafficking and domestic violence. Although they said abortion had to be off the table in order to pass the act, Quinn feels there's more at play than reproductive politics.

"I think they're lying. If it wasn’t abortion, they would have had another one that was the one they didn’t like," Quinn says. "They chose that one [abortion] because they believed it was the easiest political one to object to. It was convenient and expedient."

But The Women's Equality Act Is All Or Nothing

Cuomo and Senate Democrats received some criticism over the summer for also digging their heels in, refusing to pass individual planks of the Women's Equality Act. It's either the full 10-point bill, or nothing at all.

"That’s what equality is: all or nothing," Quinn says. "It’s all or nothing not to be difficult, not to be obstinate, not to be, you know, whatever negative word you want to assign to it. It’s because equality is what we deserve."The former City Council Speaker pointed out that without the 10th plank — the abortion provision — New York women would be "nine-tenths equal" to men:

How often do male elected officials look at men and tell them, "You know, today, you get to be nine-tenths equal." Never. And that’s why we as women aren’t going to accept the nine-tenths deal. Listen, I’ve been in the room when, in the other efforts I’ve been a part of, we expected a nine-tenths deal. When we were pushing for an LGBT civil rights law in New York, we were told we could just do a protection law this year that protects sexual orientation. We can’t do gender identity and gender expression. We’ve been waiting for a decade for Albany to go back and do gender identity and gender expression. When a legislature says, "We’ll get to that next," it usually means "never."

New York Is Already A Very Pro-Choice, Pro-Women State — Is The Women's Equality Party Even Needed?

Although abortion has been the most outwardly divisive issue, Quinn doesn't believe any of the above legislation will be easy to pass down the line. Women rights activists are still lobbying for paid paternal leave, colleges haven't had the "right responses" to sexual assault, and elected officials have "felt like they could ignore" pay equity laws, she says.

The Women's Equality Party seemingly has everything women would want: equal pay, pregnancy discrimination laws, abortion rights, no-tolerance on-campus sexual assault policies. However, women are not a monolith, and some of New York's most famous feminists are divided between the Women's Equality Party and the Working Families Party, a long-standing progressive party formed by labor unions, workers' rights activists, and community organizers.

Although the WFP doesn't explicitly advocate for gender issues, the party can be considered pro-women. Most of its political positions, from paid sick days and living wages to reducing mass incarceration for non-violent offenses, overwhelmingly affect low-income and middle-class women. Public figures and women's rights activists such as Gloria Steinem and Ai-jen Poo, who was just awarded a "Genius Grant" for her domestic workers' advocacy initiatives, have backed the WFP. Meanwhile, the Women's Equality Party has support from the likes of Lena Dunham, Anna Wintour and Hillary Clinton.

When asked if the Women's Equality and Working Families parties can coexist, Quinn was optimistic. "Absolutely. In the same that the Democratic Party and the WFP have coexisted in New York," she contends. "They can coexist, cooperate, collaborate, make each other stronger and bring more results for women and girls, as well as more direct policies for women and girls in New York. That’s what we’re trying to accomplish here."

"We’ll have to get past Tuesday," Quinn says with a laugh. "I hope we can be an exciting and inspiring model."

More like this
Scotland's First Period Dignity Officer Has Sparked Backlash
By Darshita Goyal
Christine Quinn’s 'Selling Sunset' Future Is *Finally* Confirmed
By Bustle Staff
Your Daily Horoscope For August 18, 2022
By Alexandria Lettman
Here’s When 'She-Hulk' Takes Place In The MCU
By Brad Witter
Get Even More From Bustle — Sign Up For The Newsletter