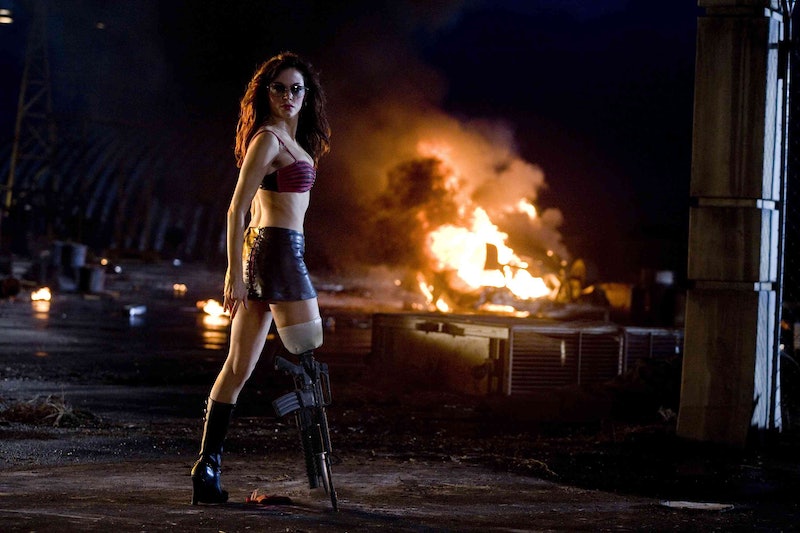 Like any good millennial, I've grown up with a healthy fear of the impending zombie apocalypse. The flesh-eating undead part is slightly unnerving, of course, as is the struggle to survive in an anarchic society where supplies is extremely limited. But the worst part? The struggle to look cute among the chaotic outbreak.

It's not that I'm vain, per se, but truthfully? If the zombie apocalypse hit, and after 3 weeks my eyebrows—or eyeBROW, singular, let's be honest here—grew back in, just forget it. I don't even want to be alive anymore, let the zombies get me.

And if modern media has taught me anything, it's that most people do not weather the zombie apocalypse with elegance, and I'm sympathetic about that for the most part; sometimes survival trumps the need to maintain a french manicure or throw on a bodycon minidress. But other times, mostly when I'm The Walking Dead, I'm just absolutely horrified by the appearance of some of those creatures. I mean, Rick Grimes' beard is a blood-matted character of it's own at this point, scarier than any walker I've seen.

Maybe I'm just promoting unrealistic expectations of beauty within a world where the only goal is to see another day. I, personally, have never been in a zombie apocalypse, so I'm sure there's some element of privilege at work here. Still, I've watched enough movies to know that there are at least some women who make the whole zombie apocalypse thing work. In fact, here's four survivors that prove you can still look pretty in the zombie apocalypse, and what we can learn from them.

Emma Stone spends the majority of this movie looking WAY cuter than anyone in the zombie apocalypse has the right to look. She has absolutely flawless bangs, and whether they're worn side-swept or straight across they perfectly frame her large, expertly lined eyes. HOW IS THAT EVEN POSSIBLE? It takes no less than 20 minutes for me to do a cat-eye. A very uneven, mediocre cat-eye.

Her clothes aren't exceptionally fancy — white T-shirt, leather jacket, etc. — but Wichita excels at nailing down a subdued rocker-chic look that works well for surviving in a barren wasteland dominated by brain-eating creatures.

Style Lesson: Looking cute during a worldwide crisis isn't rocket science, it's all about a good pair of jeans, some badass boots, and a statement-making beauty look. You don't know what sacrifices you'll have to make, but for God's sake, don't forget that eyeliner!

Alice in The Resident Evil Series

I'm a big fan of the games, and I've spent a lot of my life debating if the films are actually good or not (I feel like no), but you have to give props to Alice, played by the stunning Milla Jovovich. Not every outfit seen throughout the series is ideal for fighting—there's a lot of weird things happening with garter straps, and some looks are downright impractical—but that's kind of okay. In fact, Alice's signature scarlett asymmetric frock proves that just because you're saving the world it doesn't mean you have to sacrifice your femininity. Ada Wong gets it.

Style Lesson: It's great to be prepared to fight monsters with a variety of leather get-ups, but sometimes you just need to pull a Lana Del Rey and put your red dress on.

Cherry, a beautiful go-go dancer, has the zombie apocalypse break out the same night she quits. Unfortunately, Cherry doesn't really have time to change out of her red crop top and leather mini, and although she looks great, the outfit itself isn't perhaps the most practical look for fighting evil. Things don't get easier when Cherry loses her leg to zombies in the ensuing chaos. Worst day ever.

Thanks to some quick thinking, though, Cherry and her lover El Wray manage to supplement the leg with something way more stylish: a M4 Carbine/M203 grenade launcher combo weapon. Fashionable AND functional.

Style Lesson: Maintaining beauty—and limbs—is such a hassle in the zombie apocalypse. Sometimes you have to be resourceful and make the best of a bad situation.

To say Julie looks particularly glamorous throughout the span of Warm Bodies is a bit of a stretch. Her boyfriend is a zombie, so to most people she's going to win the unsaid competition of "Who's the cute one in the relationship?" by default. I mean, personally I think that the only thing hotter than Nicholas Hoult is undead Nicholas Hoult, but my taste in men is a tinge unconventional.

Whatever your preference is, you can't deny that Julie has an appeal that feels effortless. She's gifted with those blonde beachy waves (the kind most of us spent 40 minutes to get) and she's mastered the art of looking simultaneously cozy and casual. While there's nothing revolutionary about a beige sweater, that's the piece you usually turn to when it's chilly, you're lazy, and there's a hoarde of the walking dead outside your house.

Style Lesson: When it feels like the world is ending, we can all turn to those $10 H&M basics and still look halfway decent.