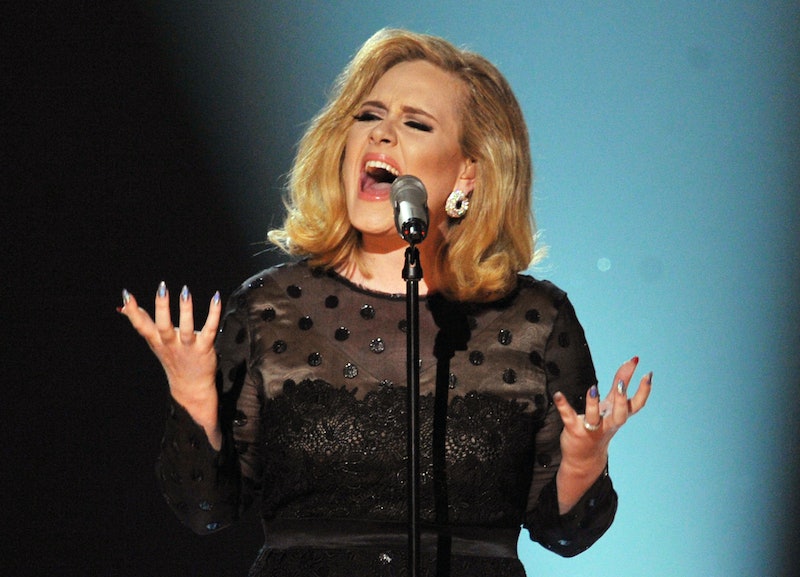 We may not know exactly when Adele’s next bundle of songs will grace our ears (Ooo, rumor has it! ...that an album called 25 will drop soon, but the powerhouse vocalist's label insists that’s a load of bunk), but we do know this: The award-winning singer-songwriter allegedly did something that invoked the wrath of another award-winning singer-songwriter. Fine, fine. “Wrath” is too strong a word. Let’s just say some name-calling happened. In a a recent interview with Q Magazine, living legend Phil Collins called Adele “a slippery little fish.” A SLIPPERY LITTLE FISH. The first time I read that line, I literally threw my head back and cackled.

OK. Let me take it back a few paces. Earlier this year, Collins said Adele asked him to work on a song with her for her highly-anticipated third album. Fast-forward a few months: Collins told Q Magazine she "gave him a piece of music to finish," but never got back to him. According to Collins, when he finally did hear from Adele, she said, “No, no, I’m moving house and the baby’s taking up a lot of my time, I’m not actually doing anything at the moment.”

Does this mean an Adele/Phil Collins beef is a-brewin'? Nah man. A fish is a-brewin', duh! ...Whatever that means.

OK, OK. Honestly, I doubt anything is a-brewin'. Adele and Collins are probably fine. I don't think a feud is in the tea leaves (eh, don't hold me to that. I don't know how to read tea leaves). Wait before you make a TEAM ADELE or TEAM PHIL shirt, K?

Anyway, don't mind me as I have fun with that "slippery little fish" line. How much fun? Well, it inspired the following imaginary scene, so I'd say a healthy amount of fun:

Phil Collins stands near a creek at dawn. He drinks tea from a travel mug. He sets the mug on a rock and rolls his jeans up to the middle of his calves. He wades into the cold water. As his body adjusts to the temperature of the creek, he spots a fish with a very human face. He bends down and tries to catch it. His hands almost close in on the fish, but the fish makes a quick escape. As the fish swims away, Collins hears a faint, "We could've had it alllllllll/Swimmin' in the deeeeeeeeep". The song fades as the bubbles travel toward the other side of the creek.