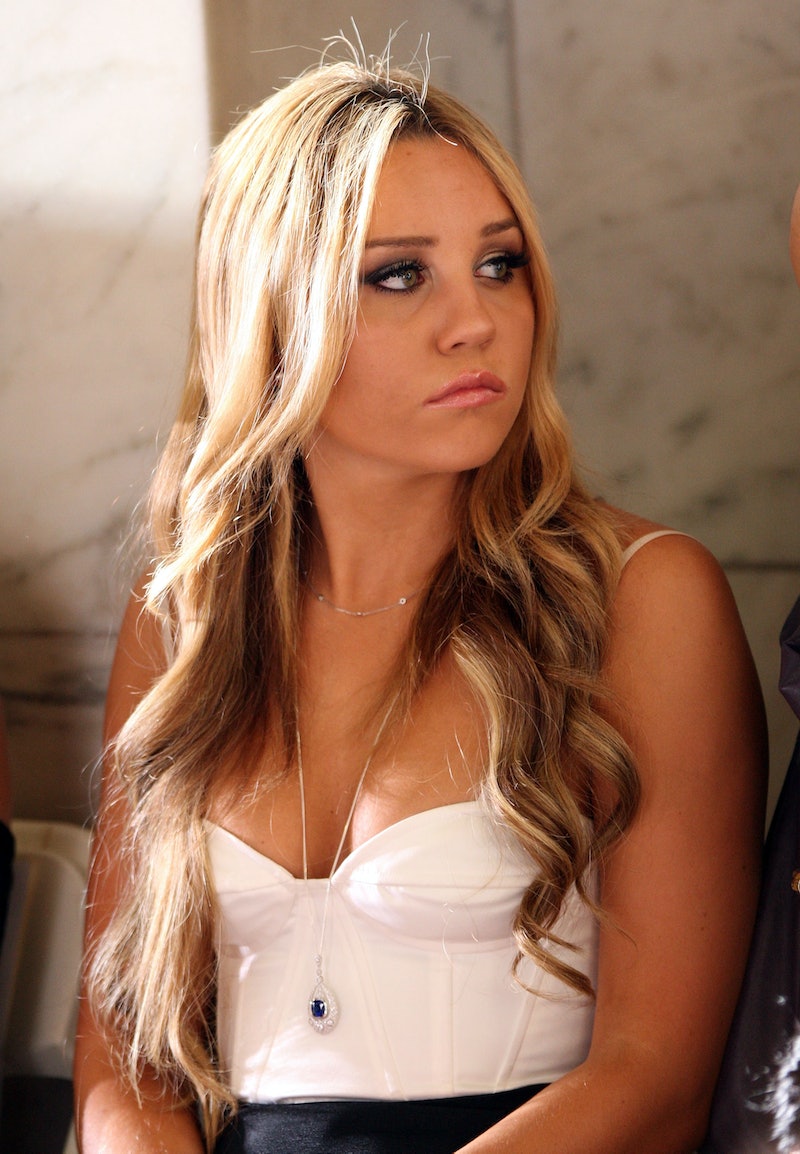 Well, that was fast. Only two days after it was first reported that Amanda Bynes' parents had gained conservatorship over her while she was being held in an involuntary psychiatric hold in California, there is already trouble. Despite the fact that the actress' psychiatric hold had been extended for another month and despite the fact that it could be extended for up to a whole year with sufficient evidence of her diminished mental health, it appears that Bynes has been released from psychiatric hold — against the recommendation of her doctors and her parents. TMZ has obtained photographs of her roaming Sunset Boulevard on Thursday night and claims that she has already been displaying worrying behavior.

According to their report, she had a meeting with a hearing officer concerning her release on Thursday. Because Bynes has "been on her meds and sounds lucid", the hearing officer ruled her too stable to be held involuntarily and allowed her to leave the facility of her own free will. She searched for a place to stay for a while, before ending up at a diner where she was allegedly telling a waiter about a facial procedure she had received that had forced her to need a band-aid and otherwise sitting alone talking to herself. They also add that Bynes tried to get a hotel room, but was turned away by several places.

Although I was initially uncomfortable with the idea of Bynes being medicated against her will in an involuntary psychiatric hold, it's a horrific twist in her story that she has already been released before being judged competent by the people who are treating her. As we saw from her behavior leading up to the psychiatric hold — both from the confirmed behaviors and from the insane rumors that built off those incidents, Bynes is in sincere need of help in order to get well again. Being released before actually being helped is a grave oversight on the behalf of the psychiatric facility and especially on the behalf of the hearing officer who judged her competent.

As for where Bynes is headed from here, it's unclear. If Wednesday's report was correct and her parents have conservatorship, then it is inevitable that she will be taken back to them at one point or another since they have legal control over her finances and daily life. However, getting her back into psychiatric hold is probably going to be difficult if not outright impossible unless Bynes lashes out again. Her hearing officer ruled that she can no longer be held involuntarily, so Bynes either needs to voluntarily return for treatment or be formally judged unfit in a court of law before she can be given anymore help.

Ultimately, it's clear to me that whatever treatments she is receiving have been ineffective, so perhaps it's time for her psychiatrists to try a different approach to helping her through her suffering. She shouldn't be suffering more from the treatment, after all.