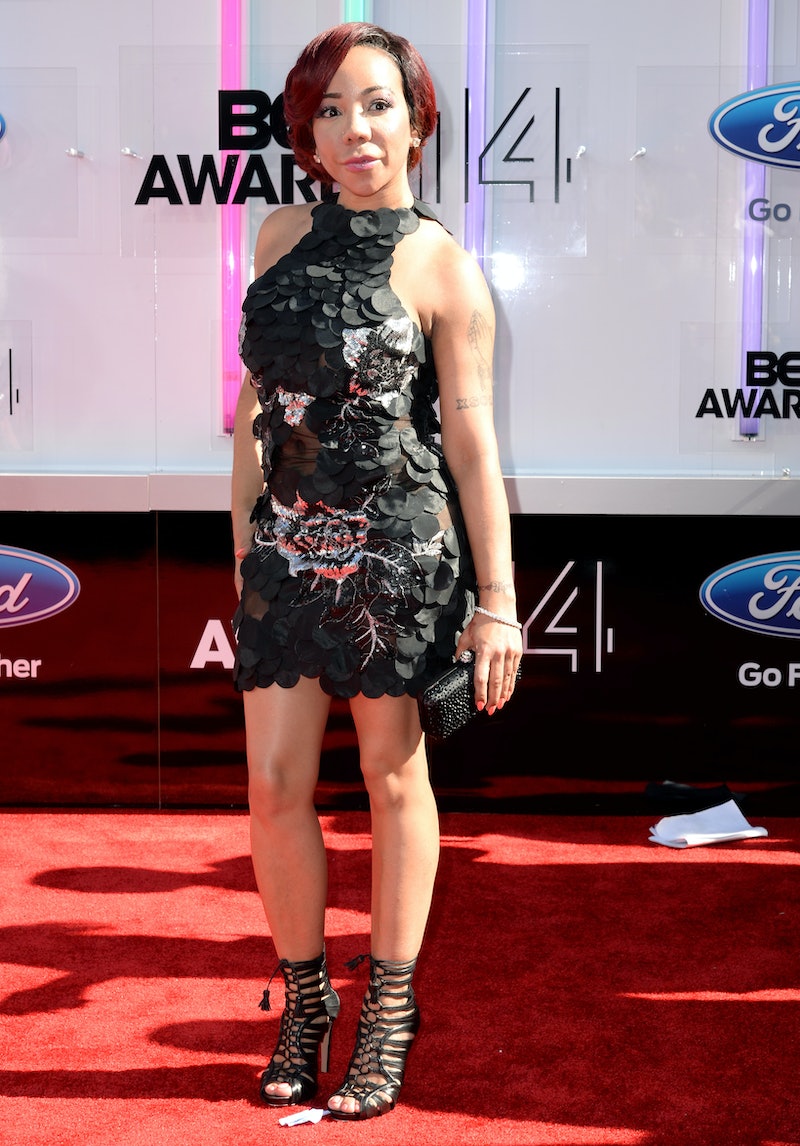 I dunno about you, but even the idea of having the ever-popular and legal LASIK eye surgery to correct legit vision issues makes me nervous. I wear contacts daily and it would be amaze to ditch the lenses, solution, reading glasses, and to be able to see 20/20 all day, every day. Then there's the former member of R&B girl group Xscape and the wife of rapper T.I., Tiny, who had had a Brightocular procedure, in which she had her eye color cosmetically and surgically lightened. The procedure that is not even legal in the good ol' US of A. Oh, where to begin?

First, the VH1 reality star, who stars in T.I. and Tiny: The Family Hustle, went from brown to gray with her eye hue, knows haters are gonna hate, hate, hate and she doesn’t care. Obviously that is the case, since knowing she would get backlash didn't stop her from getting the Brightocular procedure and from gabbing about it on her IG feed. This is a new form of body modification.

"You have to do what makes you happy," Tiny said. "As long as you're being healthy and safe, just do what makes you feel good. People are saying I must have low self-esteem, but if you really know me, I have no problems in the self-esteem department!" And her hubby T.I. loves the result, too.

And this is the reality star, post-Brightocular. Ready?

At least she was calling attention to some serious eye issues in her caption, so big ups for that.

Here's how the process works. A colored contact is permanently applied to the iris, which is the part that gives it its color. Remember when anime eyes like Lady Gaga's eyes in her "Bad Romance" video were copied and considered a controversial body mod procedure?

Tiny further spoke to PEOPLE about her choice, saying, "I had been wearing colored contacts for a couple of years and they were making my vision blurry." Well, wouldn't that suggest that maybe she ditch the colored contacts and go au naturel with the color she was born with?

"A friend of mine mentioned that she had heard of a procedure where you could permanently change your eye color and we looked into it," she continued, noting that she did not enter into this process capriciously. "We researched it for a bit but I was nervous because … it’s your eyes! But two years later it came up again. I spoke to the doctors and to patients who'd had it."

But what if you, like, hate the result? Tiny has an answer for that, too, saying, "I learned that there was no downtime, that it only took about 15 minutes — plus it’s reversible. When I found out that your could reverse it, I was sold."

Okay, that's the part where my no-effing-way-ness could be downgraded to iffy-ness. If it's reversible, great, but what if that process causes some sort of vision problem, leading to blindness, blurriness, or other ailments? There are a lot of risk factors to consider in any surgical undertaking, especially an elective and cosmetic one.

According to the reality diva, the process was easy, painless, and safe. She said, "The implant that they use to cover your natural eye color is a medical implant usually used on patients with eye illnesses like glaucoma." Botched procedures so far have been nil, and her only pain was a post-procedure headache, her inability to get lash extensions for the time being (!!!), and the $10,000 price tag, which does not include the plane fare to Tunisia, which is located in Africa and is where she had it done, as it's one of the few locales that offers the procedure legally.

While Tiny's decision may be extreme, they are her eyes and she can do with them as she wishes.