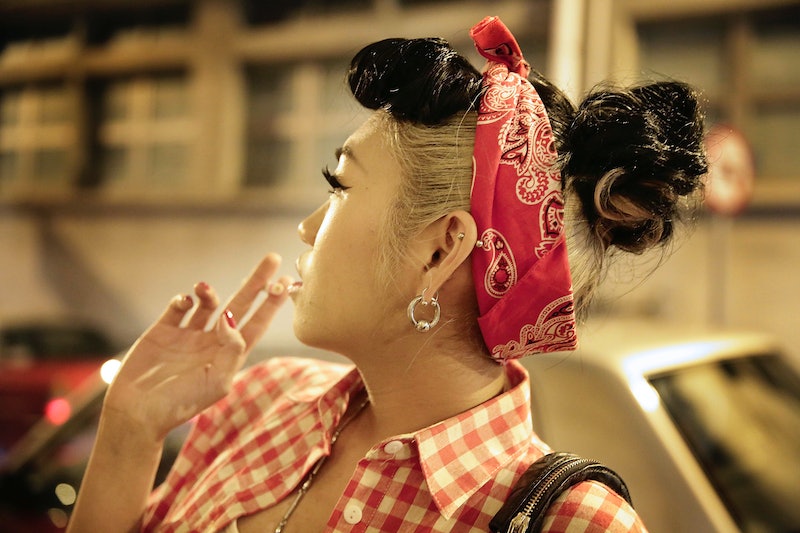 And just when you thought the parent-child dynamic was safe...

Two new sets of federal data suggest that middle and high-school kids are doing less drugs, though they are smoking twice as many e-cigarettes. Their parents' generation, though presumably quite confused about this whole electronic-cigarette business, are twice as likely to be using illegal drugs than they were a decade ago.

According the the substance-abuse branch of the Health Department, in the last decade, the number of kids between 12-17 regularly dabbling in illicit drugs has sunk by a fifth. Marijuana, the most popular drug in the United States by a mile, has presumably seen a decline in use — which has been greeted with relief by some researchers who believe marijuana is generally harmless in adulthood, but can interfere with the not-fully-developed brain.

Maybe teenagers have found a replacement: the spike in e-cigarettes is clear in the new federal data, which indicates that a tenth of high-schoolers have recently tried one, and that twice as many teenagers are dabbling in them compared to last year. E-cigarettes were initially promoted as a healthier alternative to smoking, though experts point out that since the FDA doesn't monitor them, no one really knows how much damage they cause. (Analysts say that the FDA will soon start testing them, in accordance with their rising popularity.) These days, e-cigarettes come in an assortment of colors and flavors, and are used by both younger and older Americans.

Near-retirement adults, on the other hand, don't tend to bother with e-cigarettes (just six percent of them have smoked them, according to the CDC). The last ten years has seen a surprising rise in illegal drug use in the 50-64 demographic, with more than double using illicit substances than adults a decade ago. Some analysts believe that baby boomers have picked up the habit again after their kids leave home, having initially experimented with marijuana in their youth.

Another explanation could be that public opinion in the United States is leaning towards a more lax approach to marijuana, in spite of President Obama's protestations to the contrary. (Obama was once a major "pothead" himself, so that's a bit pot-calling-kettle-black, really. Pun intended.) The drug has seen fluctuations in popularity over the years — which researchers say is the best explanation for teenagers' decreasing use of it — but was legalized in two states last year: Colorado and Washington.

And it's not just drugs of the illegal variety. More adults across the United States are using prescription drugs than ever before. In 2010, more than 15,000 women died from overdosing on prescription drugs — an increase of 400 percent in just over a decade. And a fifth of Americans are on five or more medications at once.