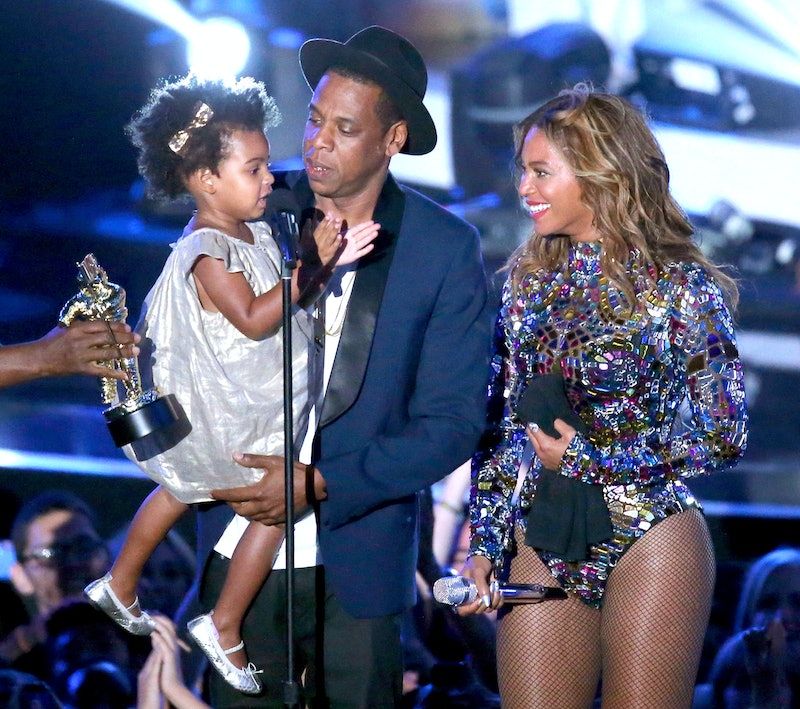 As you may not know, I am a huge fan of one Blue Ivy Carter. Not only does this adorable babe bring a constant smile onto poppa Jay Z's face and enthusiastically cheer on mama Beyoncé, but Blue Ivy is killing it this Halloween with her mini Michael Jackson costume. She perfectly channels the King of Pop circa 1984 when he won the Special Merit Award at the American Music Award ceremony. It's a truly iconic Michael Jackson look. Decked out in a sparkly red military jacket, single glove, sunglasses, and with her own pink mic, Blue Ivy was ready for trick-or-treating, partying, and possibly moonwalking. Beyoncé matched her daughter perfectly by dressing up as Janet Jackson from her "Rhythm Nation" video, of course. And while I can't help but keep awww-ing at the adorable pics of Baby Blue on Jay Z's shoulder as they head to an NYC costume party, I can't help but also shake my head, because, man, has Blue Ivy set the bar high for future Halloweens.

Not that this costume isn't hands down amazing — as any toddler version of any costume is, really — but doesn't Blue Ivy know that you have to start out simple? Pumpkin? Chickadee? Lady bug?

Here are the Carters in their Halloween glory:

How exactly is Blue Ivy going to — in the words of the immortal King of Pop she's cosplaying — just beat it? Next year she'll have to top this costume, then the next, then the next. What can she do? Maybe she can be follow up Michaels. Next year could be Thriller Michael, the next could be Grammy moon-walking Michael, and maybe even Jackson 5 Michael the year after that. But she's going to run out of Michaels eventually, and she also doesn't want to get too predictable with her choices.

I'm sorry, Blue, as much as I love your costume and you, I'm going to have to side with baby North West as far as toddler costume selection this year. She went as a skunk.

See, here you have flexibility. Considering how young North is, she has tons of Halloweens ahead of her, and sometimes you need more than one costume per Halloween season. Starting with something like a smelly woodland creature means it's all up from there.

Then again, Blue Ivy doesn't need to listen to me. She doesn't need to follow any sort of Halloween rules, actually, because she is music royalty after all. She's a rebel, or should say a smooth criminal? Hm, was that bad? Don't worry if you thought so. You are not alone.

Sorry! That was the last one! I'll quit it with the Michael Jackson songs now and will leave them all in Blue Ivy's teeny, single sparkly gloved hand.