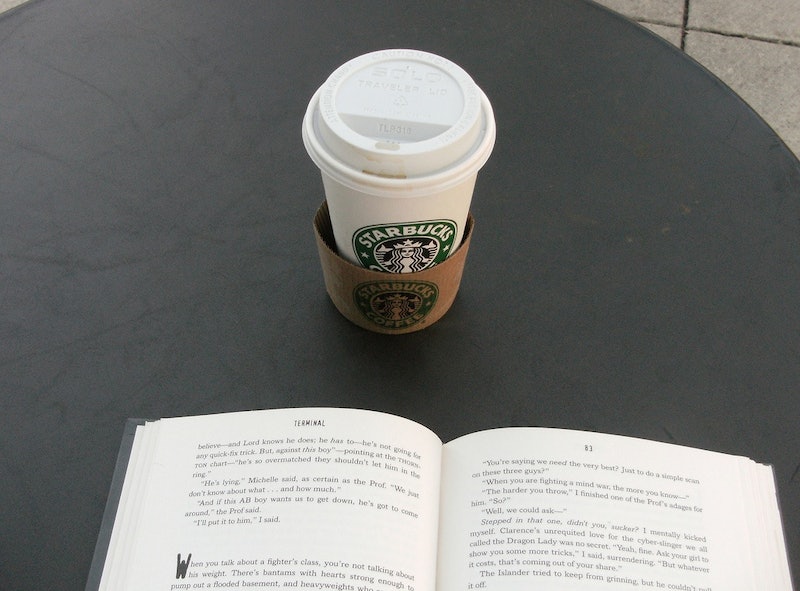 Two of everyone's favorite things are finally combined into one majestic Tumblr: coffee and literature. Literary Starbucks is the creation of three Carleton College students — Wilson Josephson, Nora Katz, and Jill Poskanzer — that imagines classic and contemporary authors and fictional characters from literature visiting and ordering from Starbucks. The results are both hilarious and ridiculously attuned to the personalities and writing styles of our favorite writers. Take for example, Harper Lee:

Harper Lee goes up to the counter and orders a grande cappuccino. She thinks it tastes great, and the other people in the shop seem to agree, so she never orders another drink again.

And, I mean, of course Lewis Carroll orders tea while Neil Gaiman picks a Salted Caramel Mocha. And yes, Shel Silverstein's post is in rhyme. Jack Kerouac? Well, going to Starbucks was all Dean Moriarty's idea in the first place.

Josephson, Katz, and Poskanzer talked with Bustle about how they came up with this incredible idea in the first place, their favorite contributions to the Tumblr, and where they see Literary Starbucks going in the future. And they were kind enough to give Bustle exclusive, new, never-before-seen Literary Starbucks entries for two of your favorite authors.

BUSTLE: I know you are students together at Carleton, but how did you meet and become friends?

LITERARY STARBUCKS: Jill and Nora are in a co-ed a cappella group together at Carleton. Nora and Wilson lived on the same floor their freshman year. Wilson and Jill once came to blows over the use of adverbs in a short story workshop.

Where did the idea for Literary Starbucks come from?

Jill came up with it in class one day when she should have been paying attention. She and her professor were joking about what Keats would order at Starbucks, which is why he is the first post on the site!

What’s your process behind the scenes — do you all work together on each post, do you divvy them up according to interests, etc.?

We file all of the requests onto a communal Google Doc, and we each write individual posts that speak to us or that we think we can write well. We all have different literary interests and backgrounds, which is helpful because it allows us to collectively cover a wider variety of authors. We usually check each other’s work before posting it to the actual website.

What are each of your favorite posts on the Tumblr?

It’s really difficult to choose between our children! But Jill’s personal favorite that she wrote is e.e. cummings, Wilson’s is Wordsworth, and Nora’s is Billy Collins.

Where do you hope to see Literary Starbucks going in the future?

Right now we’re really focused on building our blog through a diverse repertoire. There are some areas we feel we are lacking in, so we have expanded our reading lists and are attempting to branch out in both authors and genre. In the future, we would love to see the blog expand beyond just Tumblr — we would be ecstatic to see it turn into a coffee table book!

What are your interests and hobbies outside of Literary Starbucks?

Jill and Nora both sing in a co-ed a cappella group, Intertwining Melodies. Nora is very active in theatre and music. She also enjoys hiking, running, traveling, and archival research. Jill plays ice hockey (not very well) and is in charge of the student movie theater at Carleton. In her free time, she writes short stories and scripts. Wilson is captain of the varsity swim team, and he also writes, plays intramural softball, and is a member of the one person Roland Barthes fan club. Unsurprisingly, we can always be found with our noses in books — usually separate ones.

I know you all must be starting to think about post-graduation, what do you see yourselves doing after you leave Carleton?

Jill, who graduates first, is planning to move out to Los Angeles and eventually get a job writing for television. Wilson feels that the inevitability of life in the New Hampshire backwoods is inescapable, although Jill has other plans. Nora can see herself spending a long time in graduate school and then becoming a museum curator, archaeologist, playwright, or long suffering academic. Her secret dream is to become a full-time re-enactor in Colonial Williamsburg.

Below are two exclusive Literary Starbucks entries that the authors wrote specially for Bustle. And spoiler alert: They're incredible.

Mary Oliver goes up to the counter. A flock of birds follows her through the door. She orders a chocolate smoothie, but the barista can’t hear her over the general chaos. There is a kingfisher diving into the iced coffee, wrens are using straws to construct nests, and a large goose has caught itself in the ceiling fan. The din seems to die down just long enough for Mary Oliver to reach across the counter and grasp the barista’s hand. “It does not have to be good,” she says earnestly. She exits, leaving the Starbucks overrun with wildlife.

R.L. Stine goes up to the counter and orders a venti pumpkin spice latte with no whipped cream. As he takes his drink from the barista, their hands brush. He notices just how cold the barista's hand is...

The hairs on the back of his neck stand up. Cold sweat begins to form at the backs of his knees. Goosebumps appear on his arms.

R.L. Stine decides to book it out of this particular Starbucks.