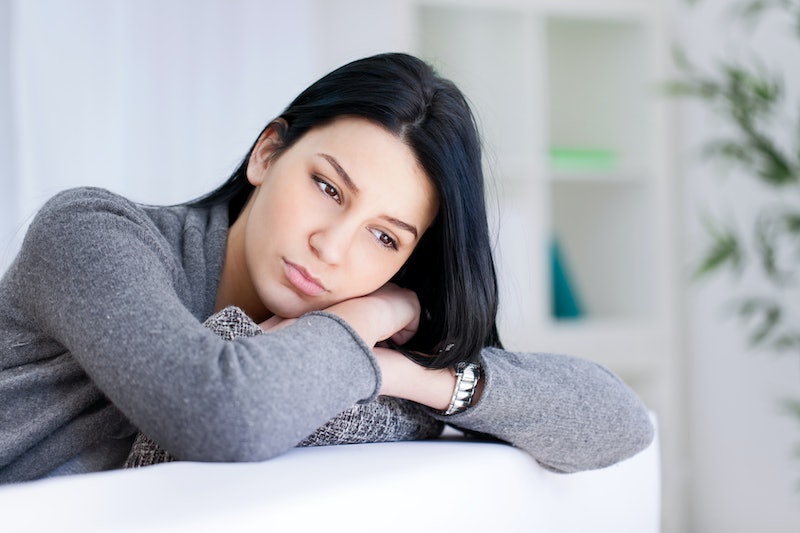 Of course no one likes being sad, but it's hard to say why sadness feels worse than the other many negative emotions (frustration, disappointment, or anger, for instance). It's not just an intractable mystery of the "human experience," though: recent research sheds important light on why sadness is the worst emotion — and it's because sadness lasts so long. In fact, you can feel sad up to 240 times longer than you might experience other emotions, a new study shows.

Researchers at the University of Leuven in Belgium studied the duration of 27 different emotions using a detailed questionnaire given to over 200 study participants. Of all the participants' recalled emotional experiences, sadness lasted the longest for them (whereas shame, fear, disgust, boredom, irritation, and other negative emotions passed quickly).

But why does sadness last so long? Sadness is typically associated with important events (like a death in the family) instead of with trivial events (like annoyance at a loud stranger on the train, or disgust at someone spitting in public). And when events are important to a person, she thinks about them: not once, not twice, but over and over and over. This repetitive, extended thought pattern is called "rumination," and it's basically normal decision-making gone haywire.

Rumination may serve an evolutionary purpose by encouraging people to deal with their worst problems, but the cost — reinforced, relived sadness — is steep. Many of the things that stress us out most aren't actually worth becoming that sad over, even if they feel important and life-threatening to our inner animals. Knowing is half the battle though: you can curtail rumination (and the resulting endless sadness) by following some of these rumination-busting suggestions:

Everyone comes down with a case of the sads from time to time, but don't be too hard on yourself. As the old saying goes, there's no use crying over spilled milk. Sadness doesn't have to last forever. With a little help, you can beat the blues and free up more time to spend on pleasant emotions.

More like this
What Is The Forest Personality Test? The TikTok Trend, Explained
By Georgina Lawton
The Viral 'Little Miss' Franchise Is Focusing On Mental Health Next
By Darshita Goyal
The Best Time To Date After A Breakup, According To Experts
By Bustle Editors
The Top Mistakes Scorpios Make In Relationships (& How To Avoid Them)
By Nina Kahn
Get Even More From Bustle — Sign Up For The Newsletter