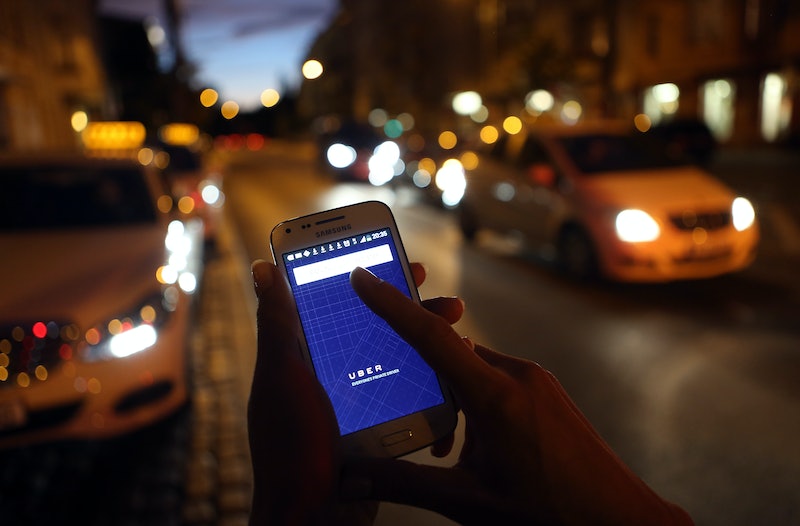 For most adults, the scariest horror of Halloween is the prospect of a candy binge stomachache, or a post-costume party hangover. But this year, one woman found herself facing something truly frightening after a night of celebrating — an Uber ride home that ended up costing her $362 because of Halloween surge pricing. So she did what any millennial in her situation might do: she decided to crowdfund the expensive Halloween Uber ride on GoFundMe and, oh yeah, managed to raise almost $600 doing so.

Meet Gabrielle Wathen, a 26-year-old woman who lives in Baltimore. As first reported by Business Insider, Wathen turned to GoFundMe, a popular crowdfunding and donation site, to raise money after she realized after the fact that a 22-minute Uber ride home from a joint Halloween and birthday celebration the night before ended up costing her $362.57. In a GoFundMe post titled "Uber Stole My 26th Birthday," Wathen wrote:

When I awoke this morning, I heard a friend talking about how outrageous Uber rates were the night before (9x original rate). I checked my bank account to, unbeknownst to me, I see a charge for $362. Not only is it my 26th birthday, it is rent day. My rent is $450 and I can no longer pay it today due to this completely outrageous charge.

Outrageous, maybe, but didn't we already learn the hard way that Uber's convenience has its price? Not to mention the app makes you agree ahead of time to its surge fees, and has a feature that lets you estimate how much your ride will cost in advance, so did this really come as a surprise? Surge pricing is how Uber gets more cars on the road during times when people want them — I suspect Ms. Wathen would have been complaining if she had had to walk the several miles home, too.

But why worry about any of that when you can just go ahead and have the Internet pay your bill for you? Wathen managed to raise $593 within 17 hours after posting her case on GoFundMe — which means she actually ended up making a profit on her expensive car ride home.

While I truly do understand the stress of living paycheck to paycheck and did it myself for years, I find it difficult to summon too much sympathy in this case. Something just feels off to me about expecting strangers to foot your bill — even if it is your birthday. There were a variety of other ways Wathen could have handled this situation, like speaking with her landlord, taking a short-term loan, or borrowing from friends.

Uber didn't "steal" your birthday, Gabi — you just ended up spending more than you budgeted. Regret is real and we've all felt it, but sorting out the consequences of one's actions is just part of adult life.