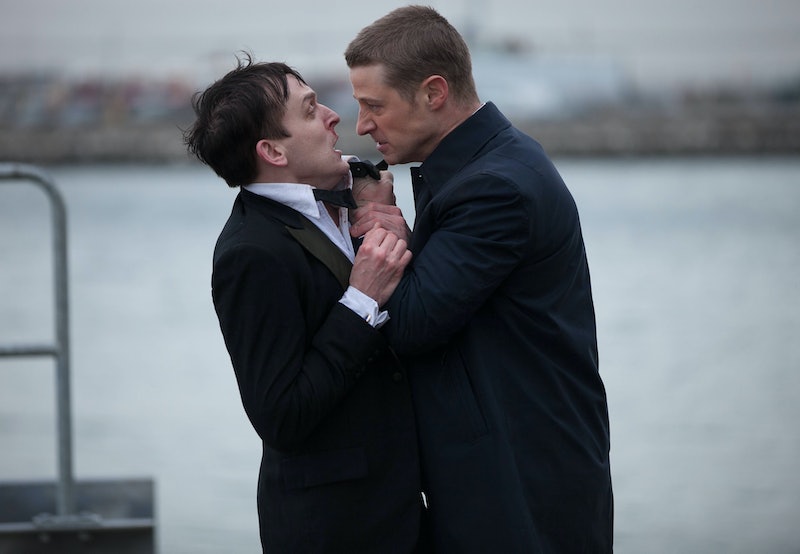 We've seen a lot of crazy stuff from Gotham. Weather balloon assassins, puncture wound assassins, goat assassins… OK, so every week they've introduced another contract killer, but it feels like the writers are building to something more ambitious, and fans have been going insane trying to predict the twists before they happen. Reddit user cohencide theorized that Oswald Cobblepot is actually Gotham's Joker. Well, it might be a little too out there to be true, but it would open up some interesting possibilities for the show. Gotham could stand to be a little more committed to its crazy window dressing and actually switch things up with a big bombshell like cohencide's idea.

Like many fan theories, the idea that Cobblepot isn't really Penguin relies far too much on physical appearance. Like Spider-Man fans furious that Shailene Woodley shouldn't play Mary Jane, or Marvelites casting doubt that Idris Elba can convincingly play a character based in Norse mythology, hair color, build, and ethnic background always seem to be stumbling blocks for fans to accept actors in iconic roles. Penguin may typically be a "short, fat" character, but Robin Lord Taylor is so good — he's overshadowing much more experienced actors with his performance — that if I was a Gotham casting director, I would have jumped at the chance to cast him, appearances be damned. And he may not look exactly like an Antarctic bird, but he's convincingly avian and weird, and they've certainly exaggerated his long nose and hunched posture to great effect.

Another issue with cohencide's prediction is that the character of Oswald Cobblepot is a little hard to pin down. In the Reddit post cohencide writes, "Yes, he has an umbrella but he hasn't shown any interest in birds. The Penguin loves birds. And he's a master burglar. This guy is a gangster. Was Penguin ever a gangster?" Penguin has been both a master thief and a gangster in different iterations of the character, so claiming one is more authentic than the other doesn't really hold water. And his love of birds? Well, in this version, it seems more like other people love pointing out his resemblance to a bird, which he may embrace as he accumulates wealth and influence.

The last problem with the theory is that from the looks of "Penguin's Umbrella," we'll be seeing Penguin do the exact opposite of go into hiding. Now, cohencide had no way of knowing this when he posted this two weeks ago, but from the trailers, it seems like in Monday night's episode all the key players find out about Oswald Cobblepot being alive. No time for him to find a short, fat, doppleganger.

However, if the confrontation doesn't go Penguin/Maroni's way, maybe Cobblepot will resort to going back into hiding. He's unwilling to leave Gotham City, so maybe he'll leave his distinctive identity behind instead, adopting, as cohencide suggests, an alias. While I find it difficult to believe that Gotham would retroactively make Copplepot the Joker, I do think we may end up seeing a shift now that all three factions — Maroni, Falcone, and the cops — are facing off.