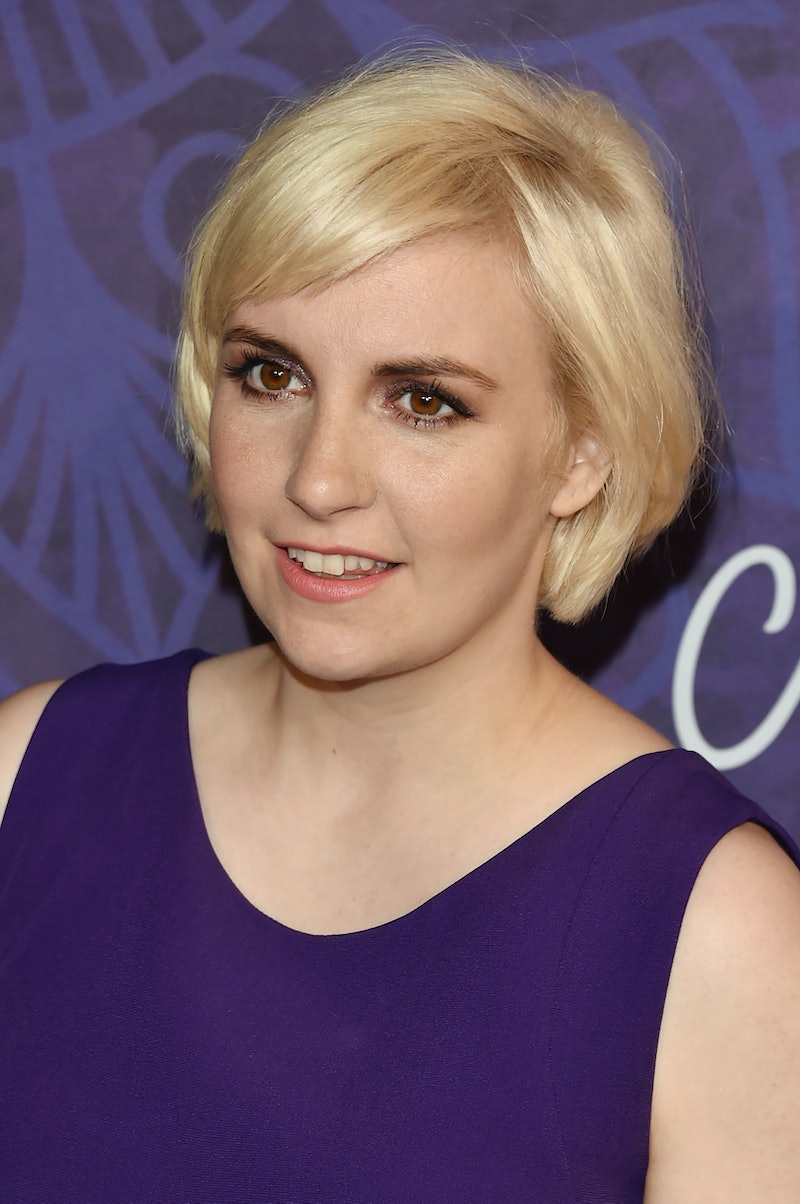 The allegations of Lena Dunham sexually abusing her younger sister are, I would think, unsubstantiated to anyone who knows Dunham's sense of humor and with the way she is always so honest in her writing. Echoing that sentiment, Lena Dunham responded to the claims that she sexually abused her sister Grace Dunham, calling the accusations "really f--king upsetting and disgusting" in a Twitter "rage spiral." Well, yeah, that just about covers it.

Said rage spiral was directed at the Truth Revolt and The National Review, both overwhelmingly conservative news outlets that published articles implying that Dunham sexually abused her younger sister. Writing for Truth Revolt, Bradford Thomas published an article entitled "Lena Dunham Describes Sexually Abusing Her Little Sister" and Kevin D. Williamson of The National Review wrote a scathing review of Dunham's Not That Kind of Girl saying that there's no "non-horrific interpretation" of the event that took place between Dunham and her sister. Both articles refer to the same incident of alleged abuse, pulled from one of the book's essays. In the excerpt, Dunham, seven years old at the time, recalls asking her mom about reproductive organs, pretty standard for a kid who hears about peenies and gynies on the playground, but has no real idea what they're used for/how to use them.

"Do we all have uteruses?" she asks in her essay, followed by "Does her [Grace, one-year-old at the time] vagina look like mine?" Next, she remembers investigating her curiosities about her baby sister's body, which is the incident that Truth Revolt and The National Review find so predatory. It reads as follows:

One day, as I sat in our driveway in Long Island playing with blocks and buckets, my curiosity got the best of me. Grace was sitting up, babbling and smiling, and I leaned down between her legs and carefully spread open her vagina. She didn’t resist and when I saw what was inside I shrieked... Grace had stuffed six or seven pebbles in there.

This scene, to me, depicts the research of a child confused by the human anatomy, rather than seeking sexual pleasure or an attempt to dominate. If that was the case, this. Is. Totally. Normal. As The Washington Post points out, the National Childhood Traumatic Stress Network cites that school-aged children who play games with their peers that "involve sexual behavior" such as "attempting to see other people naked or undressing" is commonplace, and shouldn't be considered pathological. This isn't to imply that children can't molest other children, but this scenario sounds like an instance of Dunham trying to conceptualize how her own body relates to others.

Later on in the book, Dunham goes into a larger discussion of her dynamic with Grace and psycho-analyzes her tendency to seek affection from her little sister in her self-deprecating tone:

As [Grace] grew, I took to bribing her for her time and affection: one dollar in quarters if I could do her makeup like a "motorcycle chick." Three pieces of candy if I could kiss her on the lips for five seconds. Whatever she wanted to watch on TV if she would just "relax on me." Basically, anything a sexual predator might to do to woo a small suburban girl, I was trying.

I read a sense of irony and see the "sexual predator" crack as a joke rather than an admission of lurking predatory urges. Going even further, you can view this "sexual predator" analogy as the "every-scenario-will-be-the-worst-case-scenario" thought process that mimics the way chronically anxious people think and lampoons that way of thinking. All you need to do is read her New Yorker essay "Growing Up in Therapy" (also a chapter in her book) to see that Dunham totally thinks in a self-conscious way. Cataloguing the litany of fears that she's had from age eight, in the New Yorker essay Dunham lists off the things that keep her awake at night, including "but not limited to: appendicitis, typhoid, leprosy, unclean meat, foods I haven’t seen emerge from their packaging, foods my mother hasn’t tasted first so that if we die we die together" and many more. Not to mention, she famously struggles with OCD.

I'm not denying that there was an imbalance of power between Dunham and her sister. Dunham talks about this, also, in her book. She remembers certain things she'd do to keep Grace subordinate to her, in hopes of being her savior and simultaneously the high-status sister. She continues:

What I really wanted, beyond affection, was to feel that she needed me, that she was helpless without her big sister leading her through the world... I took perverse pleasure in delivering bad news to her—the death of our grandfather, a fire across the street — hoping that her fear would drive her into my arms, would make her trust me.

Sure, these dynamics are decidedly inequitable, but relationships between siblings often are. Just drawing from personal experience, I have a very close cousin that I'm reminded of in reading this passage. Neither of us have siblings, so she's the big sister to my little sister. Being the youngest, and thus, the beta, my alpha older cousin would always tease me and coerce me into doing things I didn't want to do (I ate a Dogwood flower at age five at her behest and vomited for a week), but to this day she has had a palpable urge to protect me. It seems to be a common tune with all my friends who have sisters.

It sounds to me like Dunham has turned these scenes over in her mind for years with a measure of guilt. In the passage at hand, she seems to imply that the "perverse pleasure" of being the non-helpless big sister and knowing so is a decidedly bad thing that she should have remorse over. In her essay, she turns that highly-sophisticated analysis of the self-imposed guilt into art.

With this segment of her book becoming controversial, it appears that Dunham has become a bit of a victim of her own style and self-analysis. Her art has fallen into the hands of people who are less introspective, empathic, and nuanced in their understanding of growing pains and will take that and run with it. Especially with Dunham's endorsement of Planned Parenthood and the upcoming midterm election, it seems like there may be a political agenda at work, as her friend Clementine Ford took to Twitter to point out.