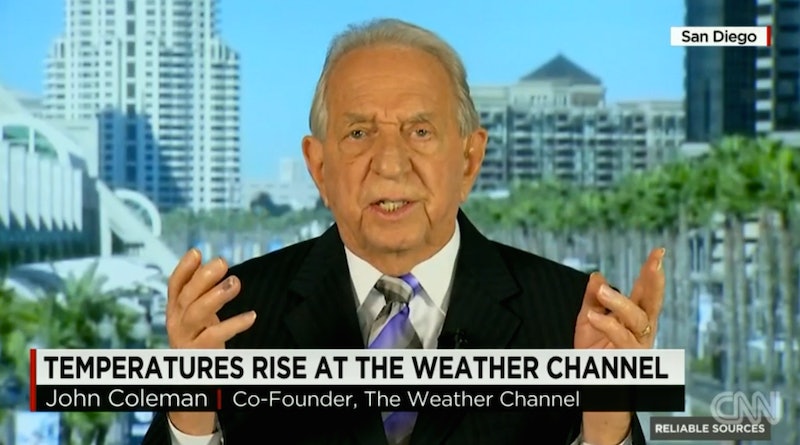 Climate change is a huge deal. At least, that's what countless reports and scientific studies have concluded over the last several decades, even some undertaken by people who really didn't believe it at first. Take Berkeley Professor Richard Muller, for example, whose turnaround on climate change stripped the denial movement of one of its favorite members. But sadly, not everyone is quite so open-minded — the Weather Channel co-founder John Coleman denied climate change on CNN Sunday, drawing subsequent criticism from the channel's current management, CEO David Kenny.

In short, it was a rather testy exchange between Coleman and Reliable Sources host Brian Stelter, who (like most people, and an overwhelming majority of scientists) believes in climate change's existence. It culminated, after Stelter rightly concluded they weren't gong to find agreement on the issue, with Coleman saying "Hello everyone! There's no global warming," with a wave of his hand to Stelter's audience.

But, sad to say, he isn't alone. Coleman is far from the only weatherperson to tread into the waters of climate denial — quite the contrary, there's quite a few of them, promoting the idea of a climate change-free planet at a time when humanity really doesn't need it. Here are a few examples (credit to Think Progress, for culling a bunch of examples of this worrying trend).

Allen, a 25-year veteran of the local news weather grind out at WBKO of Bowling Green, Kentucky is also a tremendous climate change denialist, as evidenced by his religion-citing blog post detailing his opposition. In simplest terms, it boils down to this: It's all a scheme by secular environmentalists to denigrate God, because... ?

If you don’t believe in God and creationism then I can see why you would easily buy into the whole global warming fanfare. I think in many ways that’s what this movement is ultimately out to do – rid the mere mention of God in any context. What these environmentalists are actually saying is “we know more than God – we’re bigger than God – God is just a fantasy – science is real…He isn’t…listen to US!” I have a huge problem with that.”

Of particular note, though it's unrelated to the climate change issue, Allen was also chastised for goofing around with a breastfeeding graphic, which may give some insight into his maturity, if nothing else.

Sussman's been kicking around the San Francisco Bay Are for a long time — he was CBS affiliate KPIX's weatherman for about a dozen years, a job which shrouded some of Sussman's more controversial views. Foremost among them, the idea that climate change is a myth.

All one needs to see through the global warming scam is a rudimentary understanding of science, a decent grasp of mathematics, respect for the scientific method, and the willingness to engage in a little research. Together, those attributes will allow anyone to see that the theory of anthropogenic global warming is about as sturdy as a two-legged stool.

Just how seriously does he take this notion? Seriously enough to write a book about it called "Climategate," named for a long since-debunked controversy. Appropriately, Sussman is now a right-wing radio host for KSFO, the former home of virulent far-right host Michael Savage.

Meck is the weatherman for WLEX in Lexington, Kentucky,where he's been dispensing forecasts since 1999. Unfortunately, however, he's also fallen prey to the same premature victory dance which Sussman did, castigating the community of people concerned about climate change after the release of the since-debunked "Climategate" controversy in 2009.

Can you believe the deafening silence regarding Climate Gate? The "science" that led to cap and trade was likely doctored (faked, fudged, made up, take your pick) with hard evidence being discovered and nary a word anywhere.

Subsequent investigating by Penn State University concluded that the Climategate emails were essentially much ado about nothing, but alas, their impact on public confidence in climate science had already been done. Thanks, in part, to people like Sussman and Meck.

Yup, that's right! Coleman's stint on CNN Sunday was nothing new for him, which makes sense, given his epic tenure — he's 80 years old, and spent over 60 years in the industry, retiring from San Diego-based KUSI back in 2010. And, surprise surprise, his climate change opposition isn't new or daring, either.

We’re talking about the greatest hoax in history, let’s understand this. There is no man made global warming. The whole thing is a phony call for quick action. Their support is collapsing amid a turn to much colder weather worldwide. Half of the people in the United States are now saying global warming? You gotta be kidding me.

This is a familiar phrase in climate change denial — "the greatest hoax in history," or some variation thereof — echoed by conservative lawmakers like Sen. Jim Inhofe. His indignation about half of Americans believing the planet is warming is especially frustrating, all things considered — climate change denial is higher in the U.S. than anywhere else on Earth, after all.