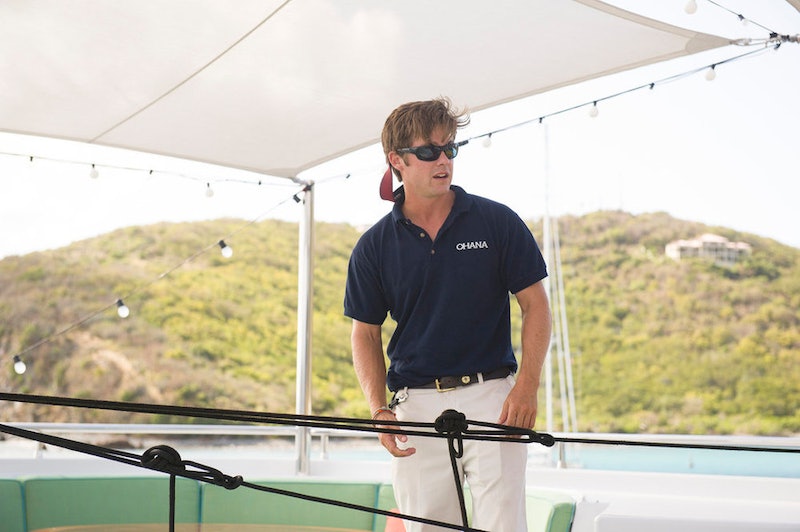 By far the most cringeworthy moment of the Below Deck finale was when Amy Johnson made a very weird move on Eddie Lucas, who has a girlfriend and a very strict policy about never getting romantically involved with coworkers! No one came off better during this season of Below Deck than Eddie. He pulled off multiple pairs of very questionable sunglasses, he did that Jack Nicholson impression, and managed to mention his relationship without seeming like a tool or making her sound like a fake girlfriend made up to impress the other kids at camp.

Like most people who have successful relationships, he doesn't choose to broadcast much about his personal life online or on television. But he has shared that he's had the same girlfriend since before he went away to work on Below Deck, and somehow they're the only two people on the planet who are able to make a long-distance relationship work. Eddie grew up on the East Coast, and unlike many of his coworkers on the Ohana, lives in Baltimore instead of Florida, where he works on a tugboat, which is pretty awesome. So if you're wondering how you can net a laid back guy who knows his way around a boat, here's everything we know about Eddie's GF.

Her Name Is Amy

It strikes me as an unfortunate coincidence that Amy Johnson happened to confess her crush on Eddie while he has a girlfriend of the same name.

She Lives in Baltimore

As Eddie bemoaned on the finale, he lives away from the rest of the cast in Fort Lauterdale. Personally I'd take an MD tugboat over setting foot in Florida any day, though that may only be because I love steamed crabs and hate high humidity.

Not everything is about looks, but Instagram is! If so inclined, these two will have the most sporty little Kennedy-babies ever conceived (and that includes all of the actual remaining Kennedys).

If you're in a relationship with a hopeful ship captain, it's probably a benefit to love the beach and the water. I don't know if she loves the beach, but judging by how hard they're cheesin, she doesn't hate it.

Her boyfriend definitely has his passionate fans — just check out some of his Twitter replies — but as a regular non-TV star, she doesn't seem to have the desire to broadcast anything else private about herself, keeping her tweets and Instagram pics protected. Smart.