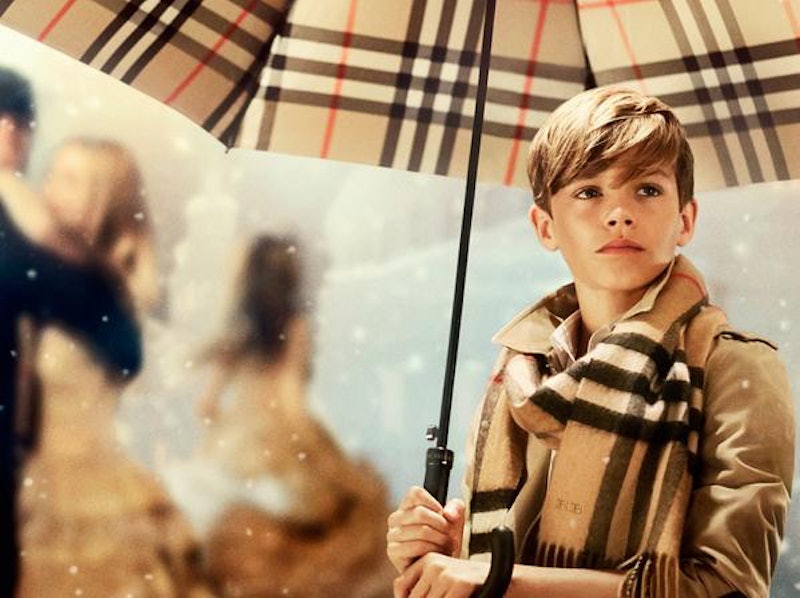 My heart is beating over a 12-year-old right now. Romeo Beckham is absolutely flawless in the 2014 Burberry festive film, "From London With Love." In the short, which is a part of Burberry's holiday ad campaign, the middle Beckham son dances his way into the hearts of, well, everyone, and judging by those moves and that brilliant smile I adore so much, he's there to stay.

Not only did the video feature a dazzling Romeo, but it's also a sensory treat as far as ad campaigns go. "The Burberry festive film is inspired by the golden age of cinematic musicals. It tells the tale of a young couple falling in love, against a theatrical backdrop of London," according to the iconic brand. Floaty tulle dresses, classic trenches, and romantic dancing take center stage in the film (behind Romeo, obvs,) and I'm pretty sure the music is going to be stuck in my head for about a week. Burberry tapped Ed Harcourt to write and perform the song for the video, which is part of a three-track campaign album that's available for pre-order today on iTunes.

Burberry is obviously pulling out all the stops for this massive campaign effort, but let's be real, Romeo is what really matters here, because the Beckhams. Let's just take a moment to think about how perfect this kid will be when he's all grown up. Swooning already.

Oh, and how dapper was he at the campaign launch party posing with his parents and Burberry's Chief Creative Officer Christopher Bailey? Again. That smile.