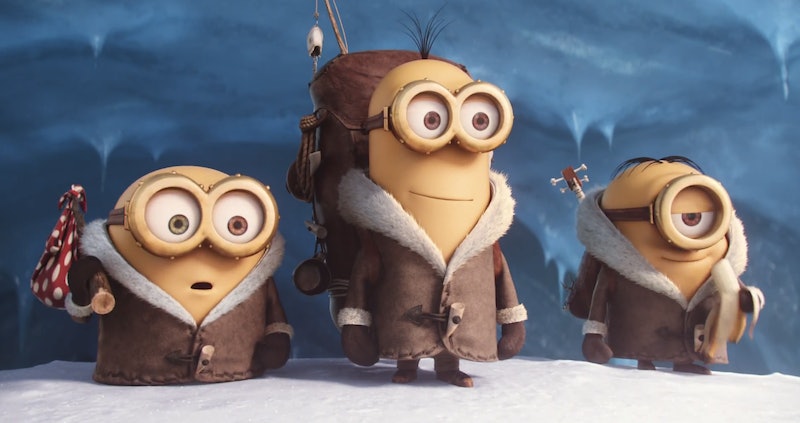 Though you're probably familiar with the cute little yellow guys from Despicable Me, you probably don't know too much about them other than what they look like. That's about to change. The minions are getting their own spin-off, and the Minions movie trailer is the most adorable history lesson you'll ever see.

It turns out that minions have been on the planet for "far longer than we have," seeking out the most despicable masters around. Before they could help Gru steal the moon in Despicable Me (and way before they changed their evil ways in Despicable Me 2), they were building pyramids in Egypt, blasting away Napoleon, and accidentally killing Dracula with a sunny birthday wake-up call. After killing their masters — all by accident, of course — they were depressed and destined for extinction until three minions stepped up to save them all. Meet Kevin, Stuart, and Bob, the three minions who journeyed to New York City in 1968 on a mission.

If all of that sounded like nonsense to you, just watch the trailer for the Despicable Me prequel below. It's the cutest thing you'll see all day. If you don't think kids' movies are your thing, then know that Jon Hamm and Sandra Bullock voice a villainous couple who are trying to take over the world. Mark your calendars for their takeover of NYC on July 10, 2015.