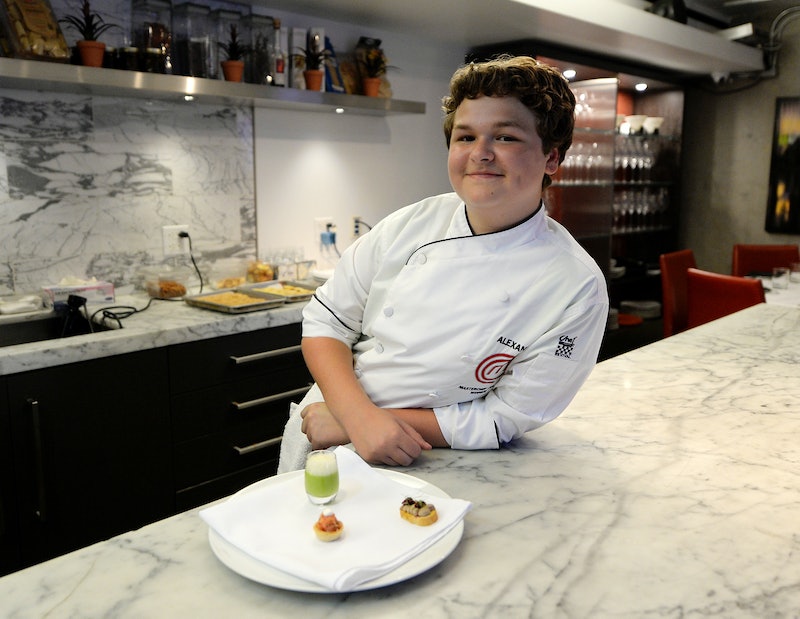 To say that after winning last year's first season of Masterchef Junior , Alexander Weiss took his culinary crown and ran with it, would be a disservice to this food prodigy and prolific young man. Only 13 years old when he won MasterChef Junior , Weiss got right to work making tutorial videos on YouTube that have inspired many an "awwwww," but an equal amount of, "wow that kid can cook," in the comments. Of course, being the most decorated child TV chef in the nation also comes with its own load to bear; he told the Huffington Post in January, "Anytime I cook now, unfortunately, there’s a lot of pressure."

And he's cooking a lot, thanks to a combination of hard work and the opportunities put in front of him because of his win. I became obsessed with MasterChef Junior last year — just a random Hulu discovery that I was soon eagerly awaiting every week — because Fox didn't just find kids who were good personalities for TV (although they were quite successful on that front), they found young people who were truly passionate about food, and worked at that passion every day. S, it's no wonder that Weiss has been inspired to work even harder after his win. Of his success on MasterChef Junior, he told the new Season 2 contestants, "It's changed the way I cook, it's changed the way I think of food." This kid, deemed "Julia Child's long lost grandson" by Gordon Ramsay, is one smart cookie.

Cooking with & for the stars

One of the sweetest things about MasterChef Junior is how much the contestants look up to professional chefs who other kids their age probably wouldn't know from Ronald McDonald. As last year's winner, Weiss has been given the opportunity to learn from many of the industry's best. On Monday he debuted an Eater video that showcased him as the first person to ever try "Cronut" inventor Dominique Ansel's at-home Cronut recipe with Dominique Ansel... and he did well!

As a semi-professional chef now, Weiss has gotten one-on-one cooking time with Graham Elliot and Gordon Ramsay, the judges who made him a champ, cooked on the Today Show, and graced the cover of Cheese Connoisseur magazine. For a cheese connoisseur, I guess it doesn't get much better than that.

Cooking around the world

Like any great chef, 14-year-old Weiss has sought out opportunities all over the place to expand his palate and techniques. In addition to interning at restaurants in L.A., New York, Cleveland, and Chicago, he's traveled to Israel, will soon for cook for the British Consulate, and just wrapped up a stint as a judge MasterChef Junior Indonesia (available in its entirety on YouTube).

Oh, and did you know there's a MasterChef cruise? Its true — there's a cruise for just about everything these days (DWTS at sea seems particularly alluring), and Weiss sets sail with other former MasterChef winners on Nov. 8.

Of course, with all the knowledge of what MasterChef Junior can bring into a young chef's craft, Weiss is eager to help guide fellow young chefs who now look up to him, and is returning to the Season 2 premiere Tuesday night at 8 p.m. to offer a little guidance. With all of its last winner's success, can lightning strike twice on MasterChef Junior?

(Yes it can, because this show is so good.)