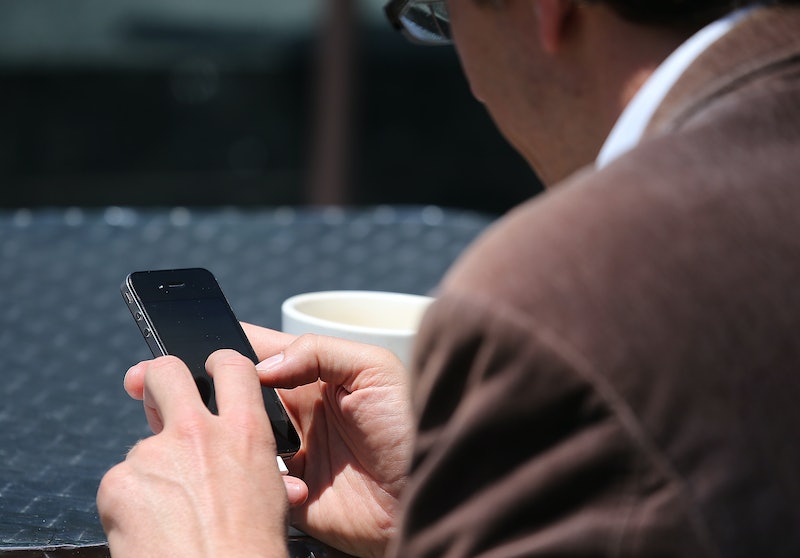 Be honest, now: When you go out to eat with friends, do you spend more time on your phone than you do enjoying your meal and the company you’re with? If your answer is “yes,” a restaurant in Sioux City, Iowa might have just what you need to curb you of the habit: Sneaky’s Chicken offers a “no-phone discount” for those who go their entire meal without chatting, texting, emailing, or otherwise derping around on their smartphones. And you know what? I actually think it’s fabulous. What a novel idea!

Here’s the deal: On Wednesday nights between 5 and 10 p.m., customers who willingly deposit their phones into photo boxes left on their tables receive a 10 percent discount off their entire bill. According to the Sioux City Journal, owner Dave Ferris and his general manager, Christy Wright (who, by the by, is also Ferris’ daughter), dreamed up the idea when they noticed how frequently their customers sat glued to their phones during their meals. Said Wright, “We just wanted to see if we could stop for a little bit and have people enjoy each other’s company more than their cell phones.”

Remember that Craigslist post from July that detailed exactly how much excessive phone usage had slowed down one restaurant’s service? While it’s true that it certainly could have been a hoax (everything on the Internet is these days, isn’t it?), I still think there’s a reason it struck such a nerve with us. The Sioux City Journal cites a statistic from Google’s Our Mobile Planet research noting that a whopping 82 percent of smartphone owners use their phones in restaurants; 72 percent of them browse the Internet while dining, while 67 percent fire up their favorite apps. Another figure from marketing service OutMarket states that 64 percent of smartphone usage occurs in restaurants. All of this prompts the following question: Sure, it may be socially acceptable to use phones in restaurants nowadays… but just because we can, does that really mean we should?

During a weekend trip to the Hudson River Valley I took about a month ago, I breakfasted at a local bakery café that had a similar philosophy to Sneaky’s Chicken’s: Phones weren’t verboten, but a cheeky sign on the wall of did proclaim, “No Wi-Fi — Talk to Each Other!” (Or something like that. I’m paraphrasing a little, but you get the idea). First off, that place had some of the best brioche French toast I’ve ever had; and second, the atmosphere was glorious. It was full of people fully engaged with each other, rather than sitting on their own little wi-fi islands with their laptops and other electronic devices — a rare sight these days, and a welcome one, at that. Not going to lie: I kind of loved it. Furthermore, as Eater points out, a lot of restaurants are hopping on the phone-free train these days: An eatery in Beirut, for example, also offers a 10 percent discount to patrons who leave their phones with the restaurant during their meals; meanwhile, other spots, like Bucato in Los Angeles, have “designated cell phone areas.” Some restaurants have even banned phones altogether (although I feel like that particular move might be pushing it juuuuuuuust a little bit).

Obviously we don’t have to take this trend to mean that no one should ever use their phones or laptops at restaurants and cafés; working from your favorite coffee shop is one of life’s great joys — and besides, the issue isn’t as simple as “PHONES BAD! CONVERSATION GOOD!” But maybe the next time I go out to eat, I’ll challenge my table to leave our phones in our pockets. It’ll be an interesting experiment, if nothing else. But if the idea doesn’t do it for you? Well, if rest of your party has no problem with everyone using their phones at the table, then text, email, and surf away. Just don’t, y’know, flat out ignore anyone in favor of your phone. A little courtesy goes a long way.